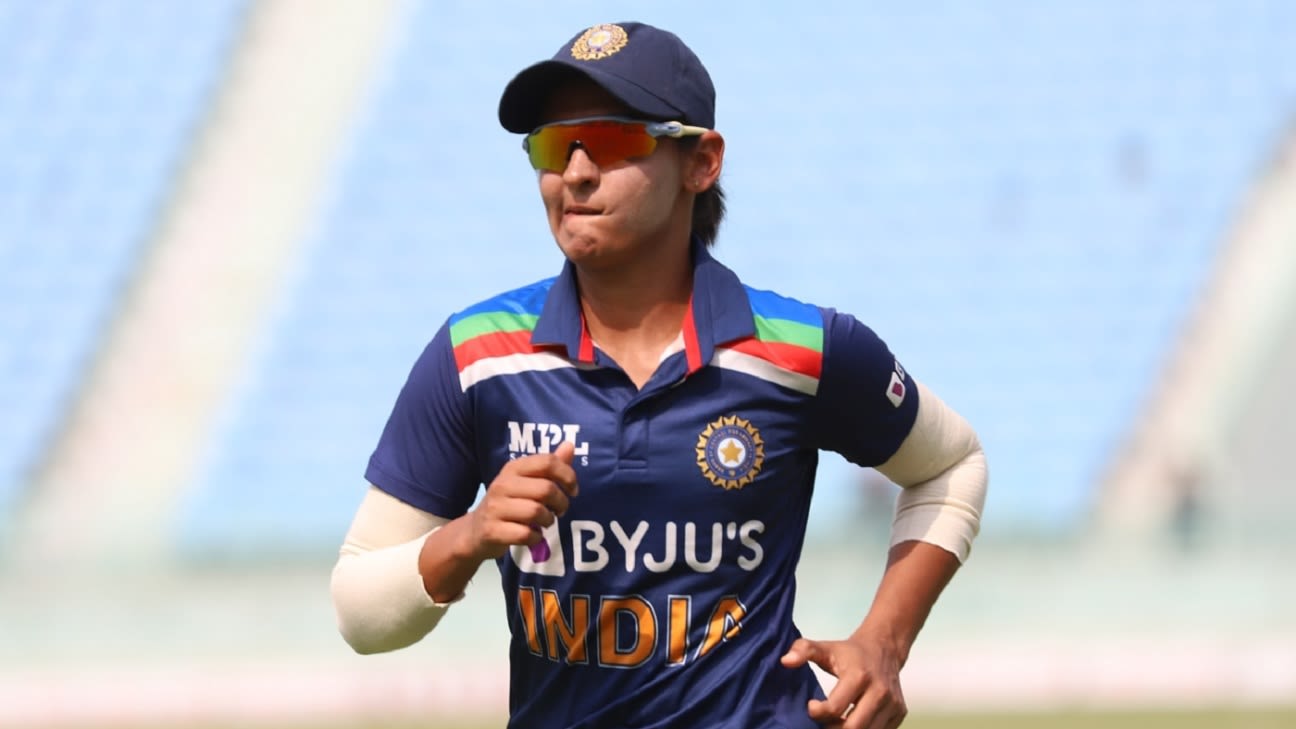 Harmanpreet Kaur, India’s vice-captain in the longer formats, has been ruled out of the first ODI against Australia scheduled for Tuesday in Mackay. She sustained a thumb injury a few days ago, said head coach Ramesh Powar, and that a call on her availability for the second ODI will be taken in due course.

“She was declared fit. She was selected for this tour but, unfortunately, some days back she got a hit on the thumb and she is not available for the first ODI,” Powar said on match eve. “Next ODI we will take a call according to her pain management and fitness management.”

Powar said that all other members of the consolidated Test and ODI squad are fit and available for selection for Tuesday’s fixture.

Harmanpreet was left out of the warm-up game on Saturday in Brisbane, though she is understood to have batted in the nets. She had ended her Hundred stint in the UK prematurely owing to a quadriceps injury and then joined India’s other four Hundred-returnees in the Bengaluru preparatory camp to serve a mandatory seven-day quarantine.

Though cleared as fit, her inclusion in India’s 22-player squad for the seven-match multi-format series was something of a gamble since she made the cut without having been subjected to a workload assessment at training given the quarantine restrictions. The selection panel, ESPNcricinfo revealed at the time, wanted to give her more time to recover considering India had to undergo a 14-day hard quarantine after landing in Australia.

In Harmanpreet’s absence, Mithali Raj could reclaim the one-down spot, snapping a streak of 18 straight innings at No. 4 stretching back to early 2019.

Frontrunners for Harmanpreet’s place in the side include the uncapped Yastika Bhatia, Jemimah Rodrigues and Punam Raut. Considering Yastika, who can also keep, is the only one among the trio to have played the warm-up, making an impressive 42-ball 41, she is likely to pip Rodrigues, who is coming off memorable Hundred campaign, and Raut to the vacant spot.

“She [Rodrigues] will be, and is, part of our thought process going forward,” Powar said. “And, it’s about combination. We’re trying to find the right composition going towards the World Cup, so Jemi might miss out, Jemi might play, so we can’t say that now. It’s a three-ODI series, so we’ll take it one game at a time.”

The firepower India may lose thanks to Harmanpreet’s injury may yet be made up by their top-order which includes the dynamic Shafali Verma. Only 17 years old, she made her Test and ODI debut on the recent tour of England and has been eye-catching enough in her nascent international career to even win a place in the Hundred. There are still areas to work on in her game, like facing the short ball and tightening up around the off stump, but the India team management are content with the way she is developing so far.

“As far as Shafali is concerned, the way she played in the Test game in England, we were happy. As a 17-year old, we have to give her a little breathing space. Mithali, SS (Shiv Sunder) Das, and I had conversations with her. She knows her role, what is expected out of her, so we don’t push a 17-year old, who is very expressive in her batting; we don’t want to curtail her game. But we give her freedom with no responsibility.

“SS Das plays a major role. He’s here as the batting coach and he has spent a lot of time with Shafali, and he’s working on her game and mental as mental aspects also. And, she has played the Hundred, so she has got some confidence from there, so it’s important for us to let her express her cricket rather than controlling her. It’s about a 17-year old; we can’t forget that.”

While India’s focus is on the current series, the captain and coach are also hoping to set up a performance template that might help them in the long run, especially with the ODI World Cup coming up in March-April.

“As a batting unit, we want to score consistently over 250, and we’re planning towards that,” Powar said. “In bowling, we’re trying to get opponents all out, so we’re trying to use Jhulan Goswami as the experienced bowler who can give us good openings up front.”

Australia are formidable opponents, riding high on a world-record winning streak in ODIs. India are aware of the challenge that they face but are certain they have prepared well enough for it.

“We had also gathered that input that they will be using a lot many of the short-pitched deliveries for our batters,” Raj said, “So we do have two of our side-arm throwers in the team, so that’s where the girls have been using a lot of time playing more of the short-of-length and short-pitched deliveries. A lot of the cuts and pulls is what we’ve been working on in the training sessions.

“Not necessarily we are going to give a thought to the winning streak but we are looking forward to our best cricket because we understand we are playing undoubtedly one of the best sides in the world on their home turf and it’s going to be a challenging series,” Raj said. “This thought process every player understands – that we’re in Australia, playing an Australian team. It’s not going to be an easy series but playing against the best side before the World Cup is the best preparation we can get. Every game we have to bring our top game against them.”