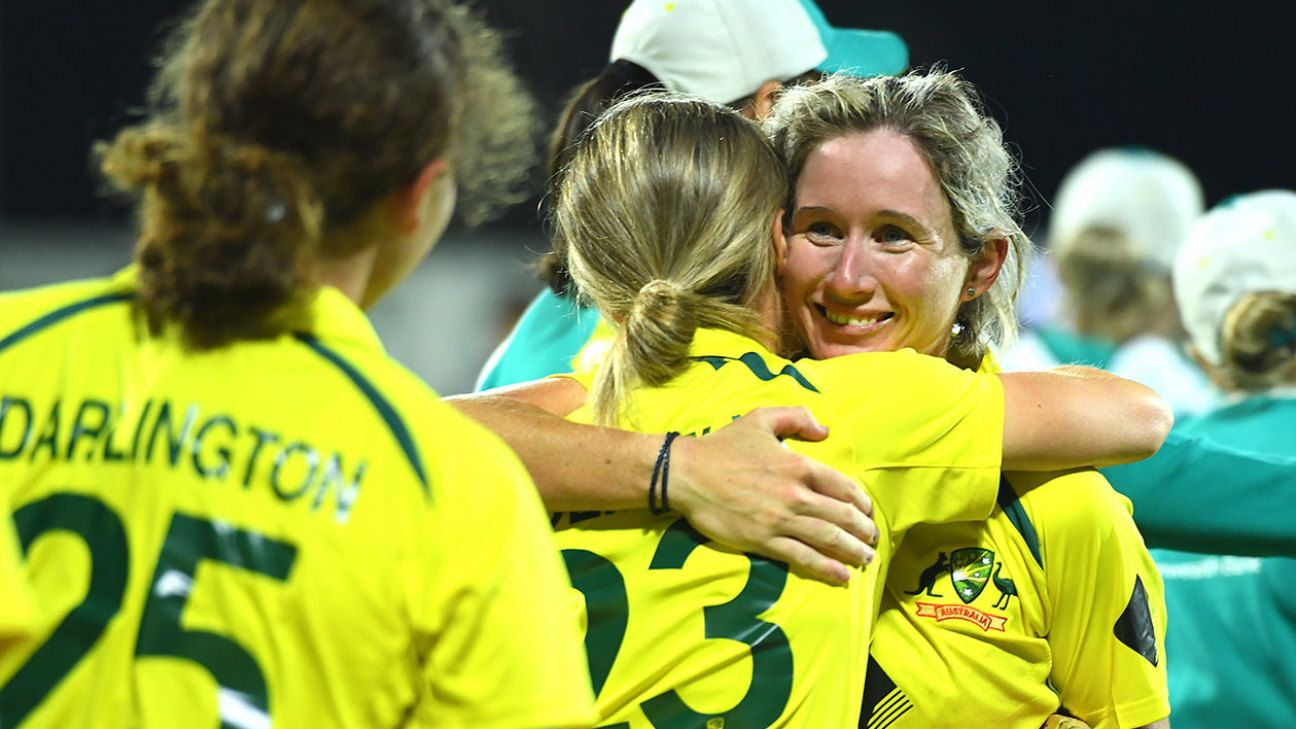 One of the greatest ODIs played in Australia came down to an extraordinary final over with the experienced Jhulan Goswami went up against Beth Mooney, who had produced a masterful century after the home side had been in early trouble, and Nicola Carey. Here’s how the drama unfolded

Australia need 13 off the last over. 12 for a Super Over! What a game this has been. Long discussion between India’s think tank. Who will bowl? It’s Goswami. Plenty of time being taken to set the field

49.1 Goswami to Mooney, 3 runs
Full toss, swung off the pads through midwicket and Mooney makes it back for the second…AND THERE’S AN OVERTHROW. But it means Mooney is off strike

49.2 Goswami to Carey, 2 runs
Full outside leg stump, heaved into the leg side and there’s another misfield which allows the second

49.3 Goswami to Carey, (no ball)
Oh dear! That’s a beamer which has clattered straight into Carey’s helmet. Of course it’s a no-ball. Main thing is Carey okay? Seems like but that was a horrendous blow

Goswami apologised straight away. That slipped out with the damp ball. Carey gets the concussion check and a new helmet. Free hit coming up

49.3 Goswami to Carey, 1 bye
They steal a bye! Was very well bowled, full outside leg, Carey didn’t connect but Mooney was alert

49.4 Goswami to Mooney, 1 leg bye
Moves right across outside off, tries to scoop but it’s only single towards short fine leg

49.5 Goswami to Carey, 2 runs
Full outside off, dragged down towards long-on, they get back for the second! Oh boy

3 to win, 2 for the Super Over. Mooney has faced one ball in this over

49.6 Goswami to Carey, (no ball)
Full toss, caught at midwicket! But they are going to check for the height. What drama. India are celebrating. It’s VERY close. What will the third umpire decide? It could easily be called no-ball this. There’s some rocking and rolling here. They are still looking at this. Crazy end to the game. IT’S A NO-BALL!!!

Free hit Did the batters make the run? Umpires confirming how many needed to win. Two runs to win. Can only be run out.

49.6 Goswami to Carey, 2 runs
Full and straight, clipped into midwicket and Mooney makes it back for the second. An extraordinary victory for Australia to keep the streak alive.