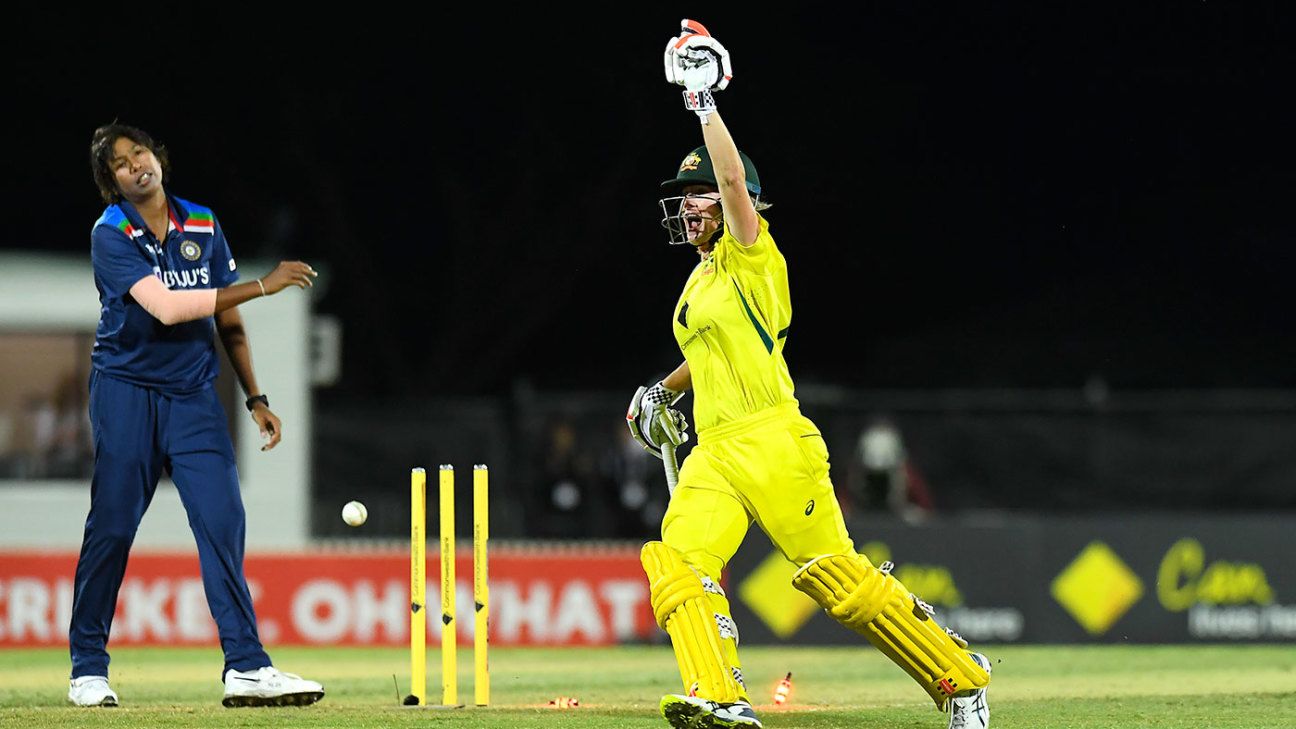 The game had it all, with India thinking they won it off the last ball, only for it to be ruled a no-ball

And then there were 26. For about three quarters of Australia’s chase of a sizeable total against India, it looked like their winning streak in ODIs would be halted at 25. But nerves – of steel on Australia’s part and something like jelly for India – and one of the great one-day knocks by Beth Mooney meant Australia squeezed home on the last ball of the game for a five-wicket win that had more twists than a corkscrew.

Mooney stayed unbeaten on 125 off 133, and was there at the end when a returning Nicola Carey and Australia thought the match had been lost when a full toss was swatted straight to midwicket with three runs needed off one ball. Only, that wasn’t to be the end because the on-field officials wanted to check for a no-ball. Numerous replays later, third umpire Phillip Gillespie ruled that Jhulan Goswami‘s delivery had indeed come up above Carey’s waist, which meant Australia had one more ball left and two to get.

Ironically enough, in a final over that began with Australia needing 13, practically every ball hit to a fielder was fumbled except for the catch off the no-ball. Another mistake off the final ball meant Mooney and Carey could sprint the two runs needed to complete a heist that might well rank alongside the great bank robberies.

Mooney was opening the batting only because Rachael Haynes was out injured, and her innings turned out to be the crowning piece in a game that had several standout performances, including Tahlia McGrath hitting her highest international score and returning her best international figures. Including Smriti Mandhana stroking her way to 86, and India putting on a much better batting performance than in the first game.

In the end though, Mooney – and Australia – remained unconquered.

Things looked very different at the start of Australia’s chase. Mandhana’s elegance had been complemented by several useful nuggets from her team-mates to drive India to 274 for 7. In reply, Australia lost Alyssa Healy for a duck in the first over and Meg Lanning soon after.

Their depth would be tested to the utmost when they slid to 52 for 4 in 16 overs, when McGrath joined Mooney. In her six previous ODIs and lone Test, McGrath had never batted as high as No. 6, nor had she hit a half-century. But then, she hadn’t taken more than two wickets in an innings either before today, and had just returned 3 for 45 in the first innings. McGrath powered her way to 74 off 77, dragging Australia’s chase back on track.

Mooney played second fiddle in their partnership of 126, and then took charge once McGrath pulled a Deepti Sharma half-tracker straight to short fine leg. On 74 off 100 then, Mooney would go on to loot 51 from her next 33 balls. Carey played a gem of her own, unbeaten on 39 off 38 with urgency in running between the wickets that consistently put India’s fielders under pressure.

Australia continued to chip away at a total that seemed just out of reach, until it came down to the final over, with India turning to Goswami to finish the job. That she ended up delivering two no-balls for height, one of which hit Carey right in the grille, showed how tense the finish was for even the most experienced.

There was no hint of this high drama when Mandhana was reeling off boundaries while putting together two crucial stands either side of a mini slump for India. She and Shafali Verma put on 74 in 11.1 overs, and then she and wicketkeeper Richa Ghosh added 76 in 75 balls. In the middle, captain Mithali Raj had promoted herself to No.3, but just like in the first ODI, she struggled to rotate strike as the momentum built by the opening stand was sucked out of the innings. Ghosh and Mandhana repaired the innings, and Goswami made a free-wheeling 28* off 25 as 53 came in the last 47 balls.

At the halfway stage, Australia needed to achieve the third-highest successful run-chase in women’s ODIs ever, their own second highest, and the highest against India. Mooney led the way to achieve the impossible.