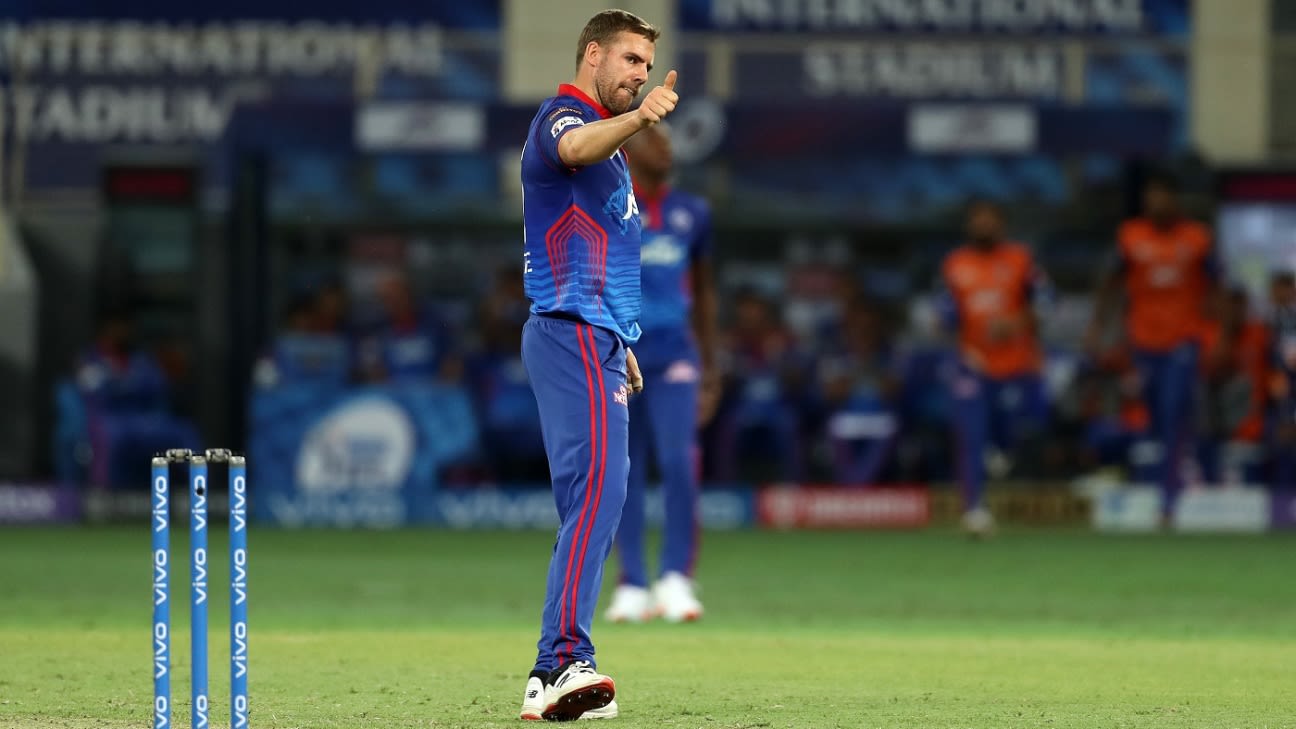 This IPL has been one of two distinct halves for Anrich Nortje in IPL 2021.

In April, it was all frustration, first at having received a false positive for Covid-19 that sidelined him from the start of the season. Then, once he was available, he was overlooked, because fitting him into the Delhi Capitals XI would’ve hampered team balance, especially with the management preferring Amit Mishra’s leg spin and Steven Smith as batting insurance. This meant seven frustrating games on the sidelines.

Sign up for ESPN+ and catch all the action from the IPL live in the US. Match highlights of Delhi Capitals vs Rajasthan Royals is available here in English, and here in Hindi (US only).

Cut to September and he’s already the toast of the season, sending down one thunderbolt after another, roughing up batters, getting them hopping and ducking, and then using that two-card trick to eventually snuff them out.

In two games, his figures read a combined 8-0-30-4. The experience of bowling in familiar conditions – he was the fourth-highest wicket-taker when the IPL was played in the UAE last season – he says has helped him plan better.

“One of the things I do is I chat with the batters, and we try and share as much info as quickly as possible, and then let the individuals decide a plan they want to stick to,” he said after helping the Capitals to the top spot all but secure them a place in the playoffs.

So far this season, Nortje has proved hitting the hard Test-match lengths are as valuable as the variations bowlers work on. He says the old-cliche of “trying to hit the top of off” irrespective of the format or conditions is wired into his muscle memory. And everything else he does is simply a by-product of this simple routine.

“Today the wicket was quite slow. Speaking to Shreyas Iyer at the break [the innings’ top scorer with 42], he said it was difficult to hit straight, so we made them [Rajasthan Royals] to do that. We hit the good lengths, not too short or full. End of the day, all our bowlers, Avesh [Khan], KG [Kagiso Rabada], all of them did a great job.

“The surfaces in Abu Dhabi are definitely slower than Dubai. Sometimes simply bowling variations on a good length is a very good option. Even if you simply change the grip on the ball while hitting the hard length, they’re as good as any variations. Essentially, you try and hit the stumps. You don’t always need to bowl a slower ball or anything [on such wickets].”

Such insights, of course, has come about through a lot of planning, awareness and, according to Nortje, chats with his bowling partner and friend Rabada. They share the new ball in Test cricket, ODIs and here at the IPL, too. One of the things he learnt was “not search for high speeds on the field” and “to try and take pitches out of the equation.”

“And from there, we learn off each other. At the end, having him there, seeing what he’s doing right, what I’m doing right, and learn. Sometimes certain things work, certain things don’t work, but just being able to communicate as freely as possible [has been beneficial].”