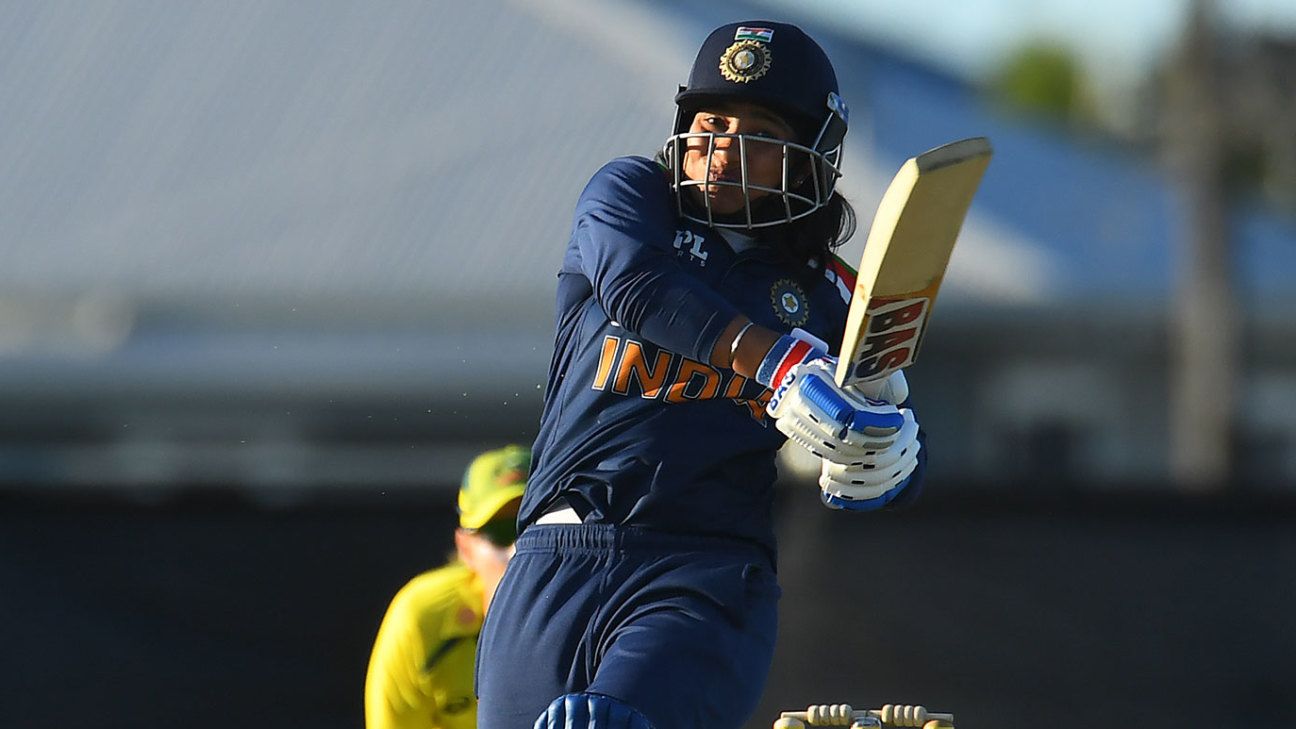 Big runs, baffling drops, bold catches, missed run-outs, a collapse, a front-foot no-ball ruling out a wicket, and… a record chase. If the humdinger from two nights ago needed a worthy follow-up, the third Australia vs India ODI in Mackay delivered it. If Australia asked for more than something special from the opposition to lose an ODI at long last, India delivered it. Albeit nervously, shoddily. The result: a thrilling two-wicket win for India, set up by Jhulan Goswami‘s 3 for 37 and sealed by her with the bat in the last over of the chase, to snap Australia’s world-record ODI-winning streak at 26 matches.

Before Goswami’s arrival, and her winning four over over left-arm spinner Sophie Molineux‘s head when the visitors needed three off the last four balls, plentiful drama had transpired. To avert a third straight loss, and a second morale-crushingly narrow defeat in under 36 hours, India needed 24 – and composure from their lower order – off the last four overs in their chase of 275. Their previous highest successful ODI chase was of 248, and their task here had been made more arduous by their efforts on the field, where they shelled four genuine chances as well as gave away misfields that cost them at least 15 runs.

Australia weren’t without their own flaws as a fielding unit, however, and they kept losing personnel – Rachael Haynes, Beth Mooney, and Sophie Molineux – to injuries as the chase went along. India exploited both developments as Deepti Sharma and Sneh Rana built a breezy seventh-wicket stand of 33 that brought them back into the game after they had slipped from 160 for 1 to 208 for 6.

In the 44th over, Rana received two lifelines against Molineux, who was bowling with her face tightly strapped after having copped a blow to the mouth at the end of the 39th over when a throw from Stella Campbell had bounced awkwardly off the pitch. Molineux had just returned to the field for her second spell, and her over saw Rana dropped twice in the space of three balls: first by Molineux herself and then by Nicola Carey at square leg.

There was more good luck for Rana in the next over, with Molineux failing to hit the stumps from cover when she was well short of her crease, and then when Carey was no-balled for overstepping after catching her off her own bowling.

Rana rode her luck, bisected the field smartly, and brought the equation down to 22 needed off 21 before scooping, ramping and lofting Tahlia McGrath for three successive fours. India had lost Deepti for a 30-ball 31 earlier in that over, but Rana’s assault swung the momentum back their way, bringing the equation down to 10 off 18.

Molineux and Australia then fought back with a tight 48th over that cost only two. With six needed off 10, Carey, who sealed the hosts’ win two nights ago in a similarly frenetic situation, scripted a moment of redemption of her own, having Rana caught at fine leg off a top-edged pull.

By then, though, Rana and Goswami had added 18 for the eighth wicket, leaving just six needed off the last eight balls. It just needed Goswami and No. 9 Meghna Singh to hold their nerve, and they did just that. Meghna plucked a single off the second ball of the 50th over before Goswami, fresh off lower-order cameos in the previous two matches, launched Molineux down the ground to complete India’s highest successful chase.

That India succeeded on the day was also down in part to maiden ODI half-centuries from Shafali Verma and Yastika Bhatia, whose century stand lifted India to 160 for 1 inside 30 overs as Australia’s attack struck more wrong notes than the right ones early in the innings.

McGrath took the new ball with Ellyse Perry, who struggled at the start with inconsistent lines to the left-right opening combination of Smriti Mandhana and Verma. Twenty-four runs came off Perry’s second over, the costliest in the match, and included an edged four from Verma that sneaked away between wicketkeeper Alyssa Healy and first slip Meg Lanning.

The end to the 59-run opening stand came courtesy a brilliant catch. Running backwards from mid-off, Annabel Sutherland, playing her first match of the series, snaffled Mandhana for a 25-ball 22, her lowest score in an ODI chase since her duck in the 2017 World Cup final.

India’s composure remained mostly unruffled following Bhatia’s arrival at the crease. Verma made a concerted effort to occupy the crease, striking at under 50 for her first 61 balls, but appeared tentative in her choice of shots as well as her running between the wickets. She enjoyed the rub of the green twice: on 45, her full-blooded slog-sweep off Molineux was shelled by Sutherland at short midwicket and then, on 48, an ill-timed jump at the non-striker’s end nearly had her run out.

In the 27th over, delivered by Molineux, a risk-free single off the 86th ball of her innings took Verma to her maiden ODI fifty. Two balls later, Bhatia reached her maiden international half-century in a gritty knock that was equal parts daring and controlled. Verma failed to press on as she was bowled by Molineux while Bhatia had only begun stitching a stand with Mithali Raj when she pulled towards fine leg where substitute Molly Strano took a blinder running in.

After Australia chose to bat, half-centuries from Ashleigh Gardner and Beth Mooney and a 32-ball 47 from Tahlia McGrath set up Australia’s march to 264 for 9. Poor fielding from India, as in their botched defence of 274 two days ago, undid much of the early inroads made by their attack on a used Ray Mitchell Oval surface with decent carry and movement.

Goswami and Meghna delivered incisive swing-bowling spells as India sent Rachael Haynes and Meg Lanning back in the powerplay. Both fell to Goswami, for 13 and 0 respectively, the veteran quick returning 6-2-15-2 in her first spell. Alyssa Healy was the next to depart, as Rajeshwari Gayakwad ran her out at the non-striker’s end with a deft touch off Perry’s straight drive.

No. 4 Perry anchored a short-lived rebuild, making 26 off 47 balls, adding 25 with Mooney. Along the way, Perry became the fifth Australian woman to 5000 international runs. Belinda Clark, Karen Rolton, Alex Blackwell and Meg Lanning had achieved that feat before Perry.

Australia reached 100 in 27.1 overs, the slowest they had been to the mark since the start of their winning streak in March 2018. After Perry’s departure, Gardner led the rebuild and brought up her fifty, her fourth in the format, with a majestic inside-out six over cover in the 40th over. One ball later, Mooney, who had received two reprieves, reached a half-century of her own, her third in as many limited-overs innings against India dating back to the 2020 T20 World Cup final, with a four to midwicket.

Just when Australia appeared to step on the gas, though, Mooney was bowled attempting to slog-sweep the offspinner Rana. Her stand with Gardner ended at 98 off 93 balls.

Australia added 79 in the last ten overs for the loss of four wickets, with McGrath’s cameo abetted by shoddy fielding. Gardner was dropped on 62, as fielders converged at short cover under a skier, only for the wicketkeeper Richa Ghosh to call for the catch and have it spill out of her gloves.

Verma followed up with a shelled chance at midwicket off Carey, and she received another lifeline in the next over as Goswami missed a run-out opportunity at the keeper’s end in her follow-through.

McGrath fell in the 49th over before Goswami, who surpassed Charlotte Edwards to become the second most capped women’s ODI player, ended the innings with a four-run final over to finish with 3 for 37. As it transpired, Goswami’s day wasn’t quite done yet, and she would have the final say to grab India a win before the pink-ball Test starting September 30.