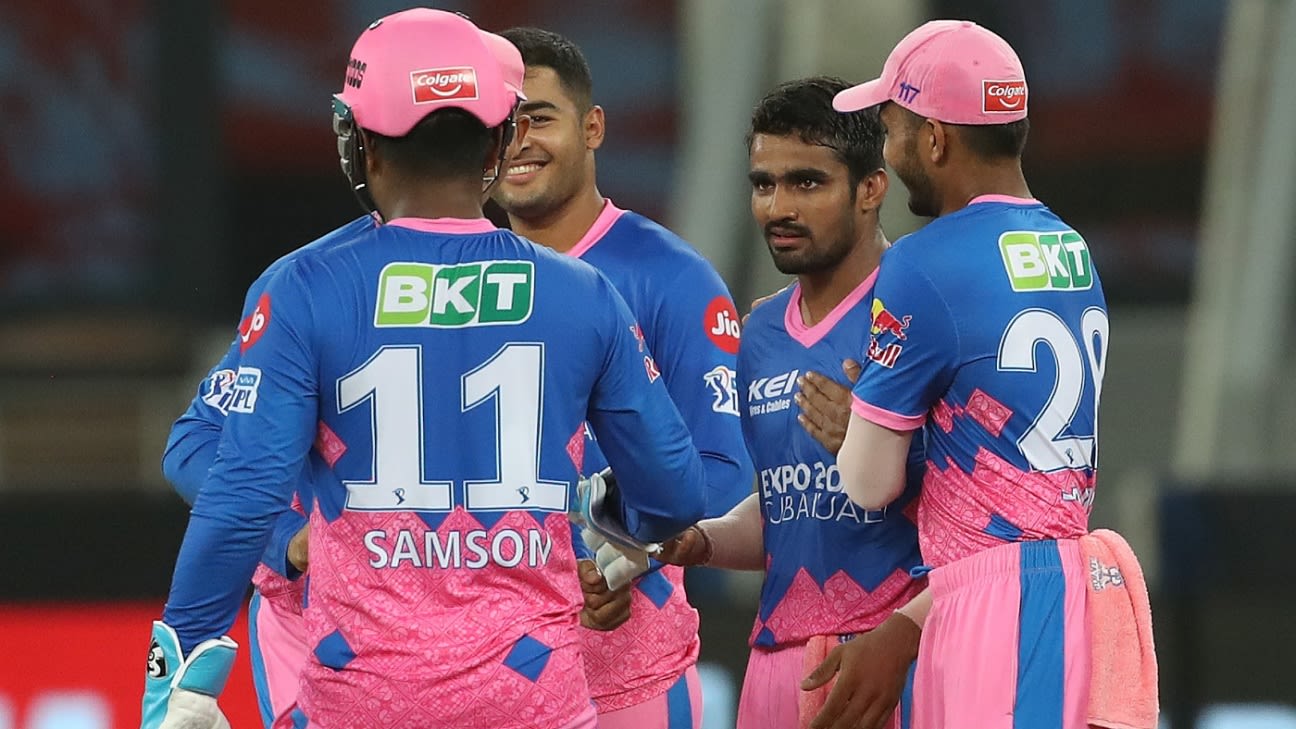 Despite being a league that boasts some of the best players in the world, no team in the IPL is immune from injuries or unavailability concerns. That has been the case for Rajasthan Royals, who have struggled for momentum in the UAE leg of the tournament in the absence of Jos Buttler, Andrew Tye and Jofra Archer. In the one match they’ve won out of three, they were helped by a stellar final over from Kartik Tyagi and nervy batting from Punjab Kings.

Royal Challengers Bangalore have been similarly erratic in this leg of the competition. After a nine-wicket thrashing at the hands of Kolkata Knight Riders in Abu Dhabi, Royal Challengers simply did not match up well against Chennai Super Kings at Sharjah, failing to first properly counter spin while batting and then unable to use their slower bowlers to contain Super Kings’ batters.

Promisingly, from a playoffs standpoint, Royal Challengers fixed those errors as quickly as two days later. Glenn Maxwell scored a match-winning 56 off 37 balls, using either switch or reverse shots to put Mumbai’s bowlers off their rhythm. Defending 165, the slower bowling of Yuzvendra Chahal, Maxwell and Harshal Patel combined to take nine wickets to spark an atypical Mumbai collapse.

While Royal Challengers are well placed to make the playoffs, Royals are in a scrappy fight with three other teams for the final fourth spot. Their season could simply come down to whether they are able to adapt to changes quicker than their opponents.

Royals have continued to tinker with their overseas combination. In addition to the absence of Buttler and Stokes, Royals haven’t helped themselves by playing batters out of position. Liam Livingstone has batted at No. 4 in two of the three matches in the second half of this tournament. Most of his success, for Lancashire and England, has come while opening. Considering he has scored just 30 runs in three matches, it might make sense to either stick with him as an opener or bring in a specialist middle-order batter, like David Miller.

Royal Challengers don’t have too many personnel concerns apart from finding their best combination.

IPL 2021 is available in the US on ESPN+. You can subscribe to ESPN+ and tune in to Wednesday’s match here.

Like many successful T20 teams, Royal Challengers have deployed a floater at No. 3. Srikar Bharat will usually come in at the fall of an early wicket or much later in the lower-middle order should the openers bat past the powerplay. His introduction at No. 3 results in AB de Villiers pushed to No. 5 and, as was the case against Mumbai, Daniel Christian to No. 6. While that worked in the India leg of this tournament, it has not in the UAE. In terms of optimising T20 batters of the ilk of de Villiers, Maxwell and Christian, Royal Challengers might want to be proactive and find their best positions.

Harshal Patel has taken 23 wickets, the highest this IPL season. He has developed and mastered a slower ball that dips late, his most effective weapon this season. Of his 23 wickets, 15 have been taken with a slower ball. Seven of his 23 wickets have been taken while bowling a slower ball in the slot (between 2 meters and 6 meters from the stumps), which equates to one wicket every five deliveries. His economy rate is 6.8 while bowling a slower ball and 10.2 while using his stock ball. To counter that, Rajasthan could consider his slower ball as his stock ball and play for the dipping variation instead of his quicker-paced delivery. That will, in turn, negate Harshal’s most efficient delivery and force him away from his strength, just like Ravindra Jadeja did in Mumbai earlier this season.