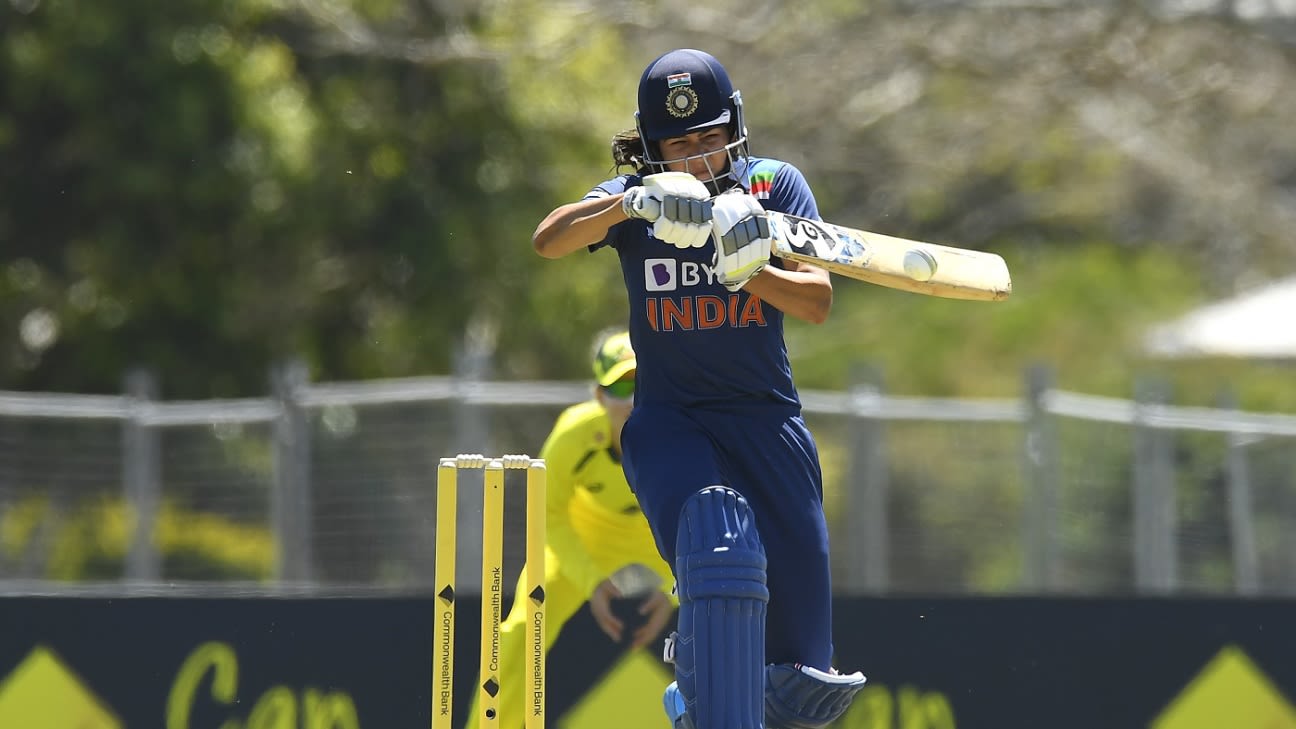 Australia and India, semi-finalists and finalists at the 2017 ODI World Cup, have played nine and 11 matches in the format respectively since the start of the pandemic. The three-match ODI leg of their ongoing multi-format series offered a peek into the strengths and flaws, and potential combinations for them to field at next year’s World Cup. ESPNcricinfo dissects some of them.

End-overs acceleration: Australia, India improve
Midway into their successful chase in the second ODI, Australia captain Meg Lanning told the host broadcaster that her batters were aiming for nine runs per over at the death (overs 40.1 to 50). By Australia’s own standards, not least with four wickets down, Lanning’s assertion sounded ambitious, for they have scored at 7.24 in the last 10 overs since the end of the 2017 World Cup.

But on the evidence of Australia’s acceleration in that chase of 275, Lanning’s faith in her team’s batting mojo proved well-reasoned. Building on Tahlia McGrath’s brisk 74, the hosts, steered by Beth Mooney and Nicola Carey, piled up 87 in the last 10 in that game, and 79 in the third match, bettering their overall death-overs scoring rate of 7.30 this year, across six ODIs.

By contrast, the other 2017 World Cup semi-finalists have been slower in the end overs this year. Defending ODI champions England have struck at 6.17, India 5.55, and South Africa 5.45. In the ongoing series, India tallied 63, 61, and 53 at the death, their best haul also coinciding with their only win in three matches. Though theirs remains inferior to the top-two ranked teams’ this year, India’s rate in the last two ODIs surpassed the team’s goal of six runs per over in the final ten, and was key to them reaching the 250-run mark twice in as many games, including during their record chase of 265 in the third ODI on Sunday.

Yastika provides answers, but poses questions
Playing only her third innings for India, left-hander Yastika Bhatia had brought up her maiden international fifty only two balls prior when she shuffled outside the off stump, lined herself up for the widish back-of-length Annabel Sutherland delivery and whip-pulled it for a cracking four to deep square. That one shot alone crystallised the confidence, composure, and technical aptitude the 23-year old has showcased on the Australia tour so far, making 64, 3, and 34 in the ODIs and a 42-ball 41 in the one-off practice game.

For a batting line-up bereft of consistency and middle-order solidity through the best part of this year, Bhatia could be a long-sought, long-term fix. But for an XI that has, aside from their offspin-bowling allrounders Sneh Rana and Deepti Sharma, fielded three quicks and at least one frontline spinner so far this series and mostly two quicks and three recognised spinners in England and the home series against South Africa, Bhatia’s impressive debut poses a conundrum.

She appears to have positioned herself as an automatic pick for India’s next ODI assignment – the tour of New Zealand in 2022 shortly before the World Cup – and perhaps also for the pink-ball Test against Australia starting Thursday. Where does, then, Harmanpreet Kaur, who sat out all three ODIs with injury, slot in (when fit)? And if match-winning contributions of Rana, the “find of the England series,” and Sharma on the ongoing tour are anything to go by, dropping either robs the lower-middle order of security and alters the attack’s balance.

Perry struggles; young Australia quicks impress
In the absence of Megan Schutt and Tayla Vlaeminck, Ellyse Perry took the new ball for Australia. The ODIs were Perry’s first new-ball stint since she limped out of the 2020 T20 World Cup with a hamstring injury. But the control and efficacy that’s underpinned her bowling through the best part of her career, were far from view as she finished wicketless.

Of the 87 runs Australia conceded in extras across the three matches, 67 came in wides, 26 of which were Perry’s doing. Though she clocked 120kph several times, and made good use of the bouncer – even hitting the India captain Mithali Raj’s helmet in the first ODI with one – her unease with finding the right lines was especially pronounced against the left-right opening combination of Smriti Mandhana and Shafali Verma. Her wayward bowling often let them off her hook in the powerplay when the other quicks created pressure from the other end.

The ODIs, however, showed just how well-stacked Australia’s feeder line is, thanks to the WBBL and WNCL-groomed Darcie Brown, Stella Campbell, Hannah Darlington, and Test-capped McGrath. Brown, the leading wicket-taker in the ODIs with five wickets in two games, troubled the opposition with potent short balls, high pace, and tight lines, while McGrath took four wickets in three games to add to her momentum-shifting 74 and 47 with the bat in the second and third ODIs.

The 19-year-old Campbell, who debuted in the third ODI, impressed with consistent pace north of 118kph and the use of her tall frame, and Darlington, too, offered decent support. The return of Sutherland, who picked 3 for 30 in the third ODI, was a reminder of the penetration she adds to the attack when not grounded by injury.

India’s fielding woes; Australia not flawless
It’s hard to predict which Indian fielding unit might show up on a given day. A feature of their 11 matches across three ODI series this year, their volatility has ranged from Harleen Deol’s boundary-riding-gravity-defying peak to sitters shelled by the rookies and experienced players alike in a collective act of infectious frenzy.

Shafali, when not substituted out by Jemimah Rodrigues after completing her batting duties, has left little for conjecture why she’s needed hiding in the Australia ODIs when fielding in the circle or beyond. Richa Ghosh, who replaced the designated longer-formats wicketkeeper Taniya Bhatia, added a vital quick-scoring element to India’s lower-middle order and showed flashes of brilliance with the gloves, too. But she made glaring errors in the last two ODIs, most notably with a single-conceding overthrow at the start of the final over of Australia’s successful chase on Friday and by dropping a sitter in the next game. Overall India dropped at least seven chances across the last two matches.

Though far more alert, athletic, and well-oiled as a fielding group, Australia, for their part, made costly errors, too, a sticking point most tellingly in their record-snapping defeat in the third ODI. Carey, Sutherland, Molineux found themselves among those to err under pressure, and two games earlier, Lanning, too, had shelled a straightforward catch, at slip.

For an ODI side that rode a world-record unbeaten streak spanning nearly four years, some room for improvement did emerge after all.