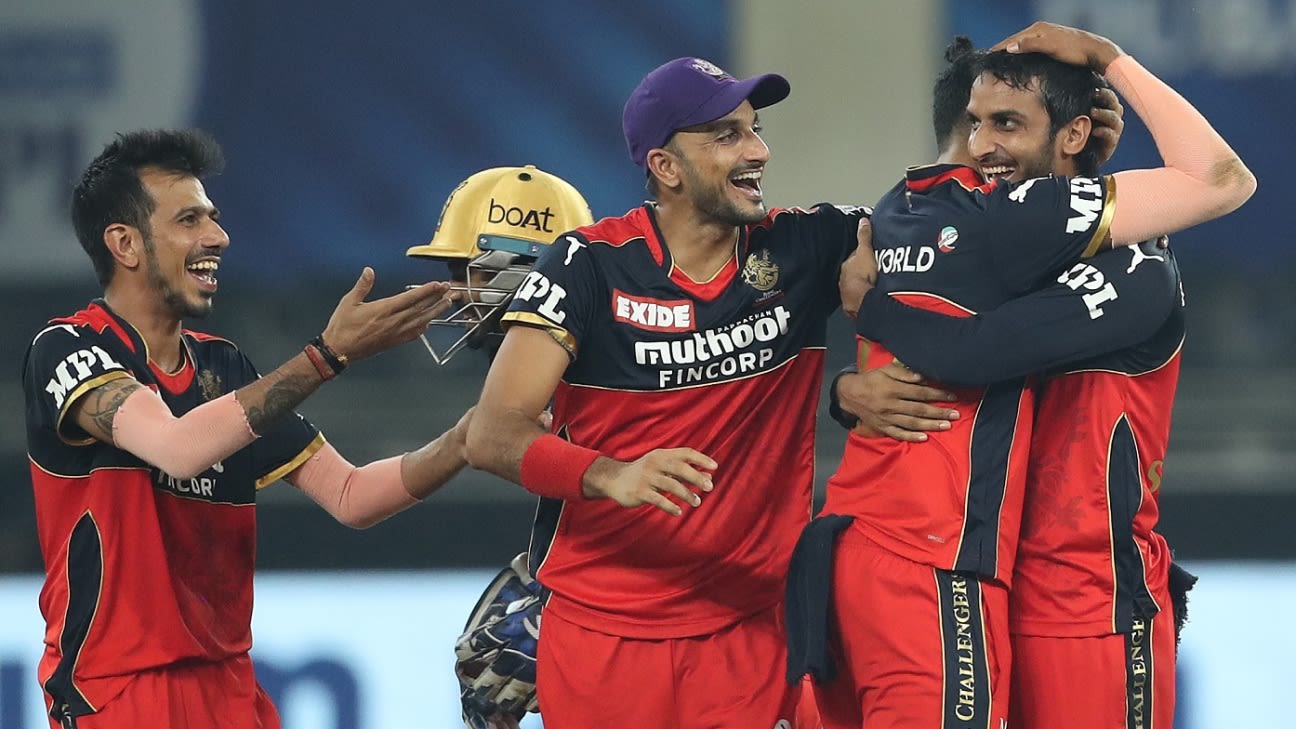 Rajasthan Royals looked good for a big score with Evin Lewis going strong, but his wicket triggered a terminal collapse

Rajasthan Royals were in sight of a tall total when they were 100 for 1 in 11 overs, on the back of Evin Lewis‘ breakneck half-century. However, his dismissal triggered a terminal collapse as Royals lost 8 for 49 – and their heads – to be restricted to under 150 on a fresh Dubai track. Royal Challengers Bangalore then hunted down the target with ease to consolidate their position in the top half of the points table, with seven wins in 11 matches.

Royals, on the other hand, subsided to their seventh defeat in 11 games. Despite the loss on Wednesday, Royals could still qualify for the playoffs if they win their remaining three games.

They might have still harboured hopes of a comeback when Devdutt Padikkal and Virat Kohli fell either side of the powerplay, but KS Bharat and Glenn Maxwell forged a 69-run partnership to dash all of that. Royal Challengers ultimately sealed victory with seven wickets and 17 balls to spare, also giving their net run-rate a leg-up.

Heavin’ Lewis
With Royals having two left-handers at the top, Kohli matched them up with Maxwell’s offspin. Maxwell had won a similar match-up against Krunal Pandya at the same venue on Monday, but this time Lewis and Yashasvi Jaiswal immediately dumped him out of the attack by taking 13 off his first over. Lewis then cranked up to top gear, lining up debutant George Garton for two sixes and a four. In the next over, he heaved a slower ball from Harshal Patel over mid-on to rush Royals past fifty within five overs.

Jaiswal rode in Lewis’ slipstream, making 31 off 22 balls in a 77-run opening partnership before Dan Christian had him scooping a catch to extra-cover. Even that didn’t slow down Lewis as he heaved his way to a 31-ball half-century – his first in the IPL and his fifth fifty-plus score since the start of CPL 2021.

The cataclysmic collapse
It was Garton who began the collapse in the 12th over when he bowled a 106.3kph slower ball into the pitch. It kicked up from back of a length and drew a top edge from Lewis, with Bharat snagging the catch. Legspinner Yuzvendra Chahal and left-arm spinner Shahbaz Ahmed then took over, messing with Royals’ middle order.

Sign up for ESPN+ and catch all the action from the IPL live in the US. Match highlights of Rajasthan Royals vs Royal Challengers Bangalore is available here in English, and here in Hindi (US only).

Chahal had Mahipal Lomror stumped with a wrong’un before having Liam Livingstone hole out to long-on with his trademark wide, loopy legbreak. Sanju Samson and Rahul Tewatia tried to target Shahbaz, Royal Challengers’ seventh bowling option, but both picked out the boundary riders in the 14th over. Patel, who had earlier taken a pasting from Lewis, tricked the lower order with his assortment of slower balls.

Bharat and Maxwell step up
With the ball sliding onto the bat nicely in the early exchanges, Kohli and Padikkal held nothing back, hitting four fours each in a powerplay that produced 54 runs. Mustafizur then shook up the Royal Challengers briefly with his skillful change-ups. After he bowled Padikkal in the sixth over of the chase, Riyan Parag effected a direct hit in the seventh to leave Royal Challengers at 58 for 2.

Bharat then combined with Maxwell to settle the chase. He slog-swept Chris Morris for six, pumped Lomror down the ground for four, and even reverse-swept Rahul Tewatia for four, which had Kohli up on his feet and cheering wildly from the dugout. As for Maxwell, he laid into Morris, smashing 24 off nine balls from him. Bharat holed out for 44, but Maxwell glided to his fifty and wrapped up the chase along with AB de Villiers.