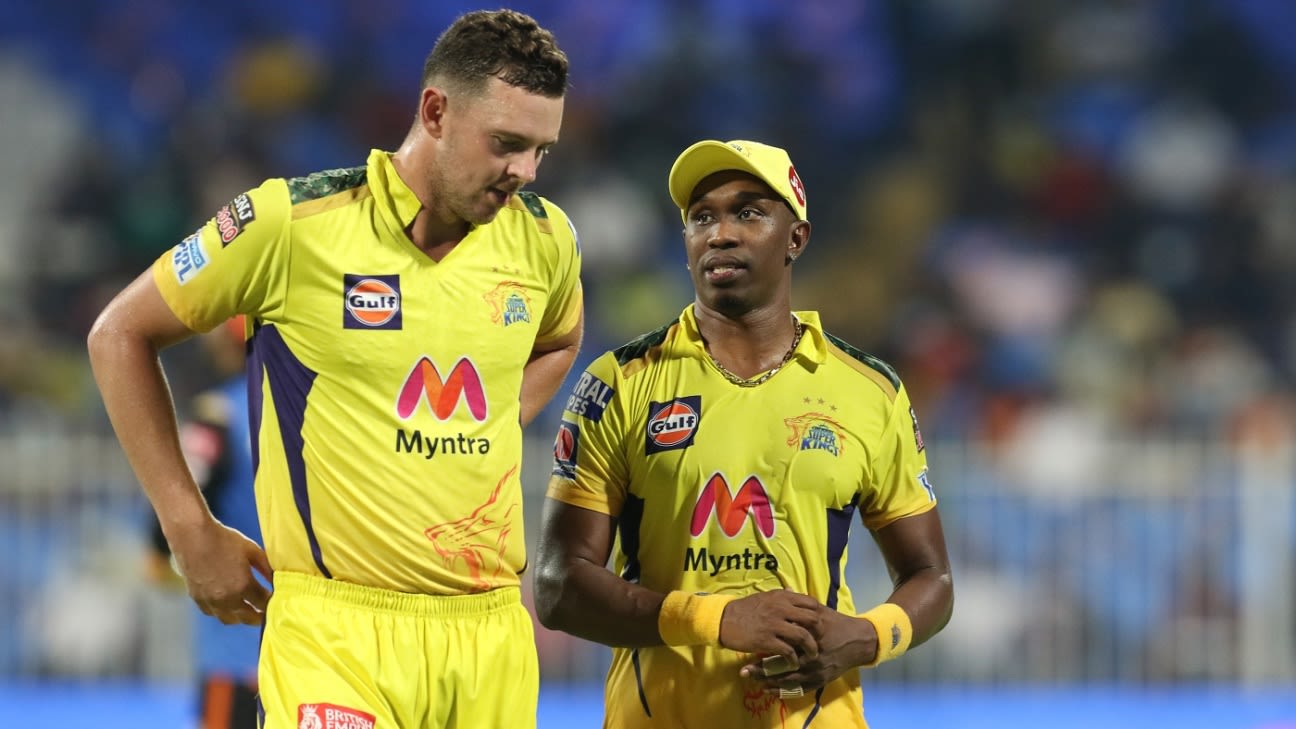 Chennai Super Kings stormed into the playoffs with a six-wicket victory over the now eliminated Sunrisers Hyderabad. While they are yet to be assured of a top-two spot, which offers two shots at a place in the final, the progress MS Dhoni’s men have shown this IPL season suggests that target may not be too far off their reach.

DJ in da house
Sunrisers were restricted to a meagre 134 for 7 on Thursday and this is how it happened.

The match was played on a fresh Sharjah pitch. It remains unhelpfully slow but early on it also offered sideways movement. So Dhoni was prompted to do something he rarely ever does. He turned to Dwayne Bravo (4-0-17-2). It was only the sixth time in five years that the West Indies allrounder was on as early as the seventh over of an IPL game.

But there was a reason for this and its name was Kane Williamson. The Sunrisers captain came into the game with an immense record against Super Kings – 327 runs at an average of 47 and strike rate of 145. Taking him out early means wrecking 90% of their batting plans. (Jason Roy had already been dismissed). So, Dhoni went to his “champion” and he obliged with a lovely outswinger that moved late, beat the bat, struck the pad and got the wicket.

Sign up for ESPN+ and catch all the action from the IPL live in the US. Match highlights of Sunrisers Hyderabad vs Chennai Super Kings is available here in English, and here in Hindi (US only).

The Super Kings squeeze
Sunrisers were now in a horrible predicament. Their best batters were back in the hut. There were still 13.3 overs to face. And their opposition has a long and storied history of exploiting slow pitches.

Super Kings went 48 balls without giving away a single boundary between the sixth and the 14th overs, with Ravindra Jadeja at the forefront of that squeeze. The left-arm spinner looked unhittable as he attacked the stumps, taking all the pace off and getting just enough turn. He finished with figures of 3-0-14-1.
Josh Hazlewood then thrived at the death, picking up two wickets in three balls, as Sunrisers, having made it to the end of the powerplay on 41 for 1, just fizzled out.
The Super Kings cruise
The rise of Ruturaj Gaikwad has been remarkable. When he first came along, he seemed rather ill-fitting with the needs of T20 cricket. A batter who didn’t have a power game, and worse who didn’t even bother to look for those big hits. All those fifties he made last season to pick up consolation victories came at about a run a ball.

Cut to 2021 and Gaikwad (45 off 38) is not just looking for the big hits, he’s executing them better than virtually any other opener out there. His 75-run partnership with Faf du Plessis (41 off 36) broke the back of a small chase and ensured even a little hiccup towards the end – three wickets in eight balls – didn’t matter.