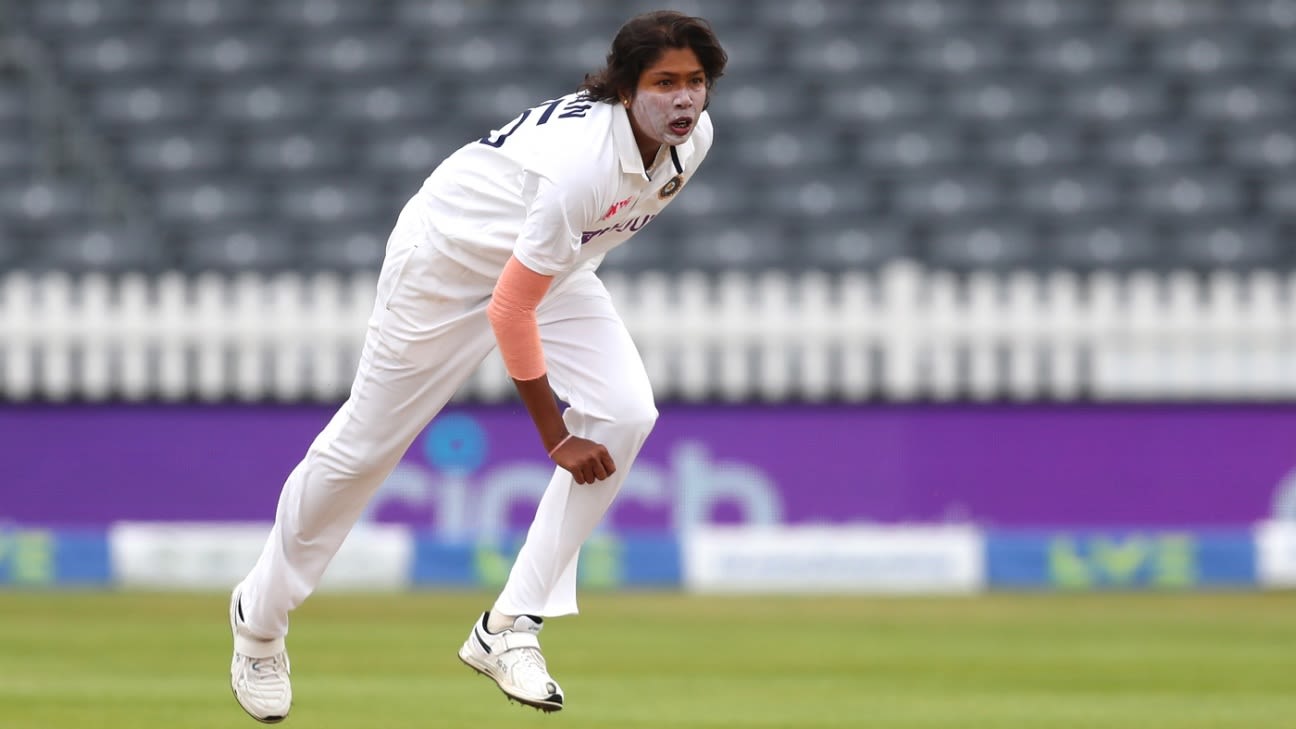 This has been a long time coming. It was 2006 when these two sides last met in a Test match. The one-day series has whetted the appetite for what could come on the Gold Coast, particularly with the added element of the day-night pink-ball factor – just the second such Test in the women’s game.
It is India’s second Test of the year after their encounter against England in Bristol where they fought hard on the final day to secure a draw. Australia have not played since the 2019 Ashes – England have been their only opposition since that Adelaide Test 15 years ago. Preparation has been a challenge for both teams, although the Australian players have at least been able to practice with pink balls in pre-season. For many, though, it will be learning on the fly – even the home side will only have four players who appeared in the 2017 Test at North Sydney Oval.

The multi-format series stands at 4-2 after India’s streak-ending victory on Sunday. There are four points available for the Test, so should Australia win, they will take an unbeatable lead ahead of the T20I series. Matthew Mott, Australia’s head coach, has said that his side will play “one-day cricket for four days”.

The previous day-night was a high-scoring draw on a docile surface. There is the hope that this encounter will be a more even contest with the start of Australia’s chase in the second ODI, albeit with a white ball, where it nipped around considerably for Jhulan Goswami and Meghna Singh a hopeful indicator. Ellyse Perry and Tahlia McGrath also swung the ball during the one-day series, although they struggled for control at times.
Both teams should bat deep with a strong group of allrounders to select from. In the final ODI, Australia had Sophie Molineux at No. 10 and something similar could happen in this match, although the loss of Rachael Haynes with injury is significant. Against England, Shafali Verma and Smriti Mandhana added 167 in the first innings (with Verma making 96 and 63 on her Test debut) but the experienced duo of Mithali Raj and Harmanpreet Kaur produced a combined tally of just 18 runs.
It remains to be seen when India will next play Test cricket after this series, but for Australia, they have the Ashes in January. However, the four days of play out there shouldn’t be 15 years until the two teams meet again. “Hopefully, it’s the first of many and not just a one-off and we can go and play a Test over in India in the next few years, think that would be a really cool thing to do,” Meg Lanning said.

Ellyse Perry‘s Test record is astonishing: a batting average of 78.00 and bowling return of 18.19. Her last three Test innings have been 213*, 116 and 76*. However, the last 12 months have not been easy for her, especially with the ball, after the injury at the T20 World Cup in 2020. Last season’s tentative return could largely be put down to the recovery but, while a lack of match practice and 14 days hard quarantine made the build-up to this series difficult, her ODI returns were very unconvincing. With the strength of pace bowling coming through the Australia game, it could be that her batting becomes the central role, although never rule out a champion.

Jhulan Goswami is one of two survivors from the 2006 Adelaide Test along with Raj. With the ODI World Cup next year a likely end point for her outstanding career, this is shaping as a 12th and final Test match. She bowled superbly in the ODI series, particularly the final two matches (barring that final over with a wet ball), with her seam and swing troubling Australia’s top order. The ball to remove Alyssa Healy was a classic.

Haynes being ruled out of the series with a hamstring injury means Beth Mooney will open the batting, something she did on her Test debut in 2017. If Australia want a specialist batter to replace Haynes, they have Georgia Redmayne in the squad, but the more likely route would appear to be another allrounder. Annabel Sutherland impressed in the last ODI. At least one of Darcie Brown and Stella Campbell is expected to debut while both could play.

Harmanpreet has been ruled out having not recovered from her thumb injury. That could be a spot for Punam Raut, who played against England, or Yastika Bhatia after an impressive ODI series. India also need to decide on the balance of their side from one of Pooja Vastrakar or Shikha Pandey for a seam-bowling allrounder option, though Vastrakar has fared far better than Pandey with the bat this year. Taniya Bhatia is expected to regain the gloves from Richa Ghosh.

Two days out there was a healthy covering of grass on the drop-in wicket although it was likely to have had a cut before the game. The weather forecast could be a problem with showers and storms forecast for the first two days.

“There’s some weather around but we are focusing on what we can control. Sounds like there’s a decent storm coming but we’ll just play with what we’ve got and hopefully, we don’t lose too much time.”
Meg Lanning

“It will be my first experience with the pink ball. I’m quite curious to see around that [night] period and they say it will be a little difficult.”
Mithali Raj