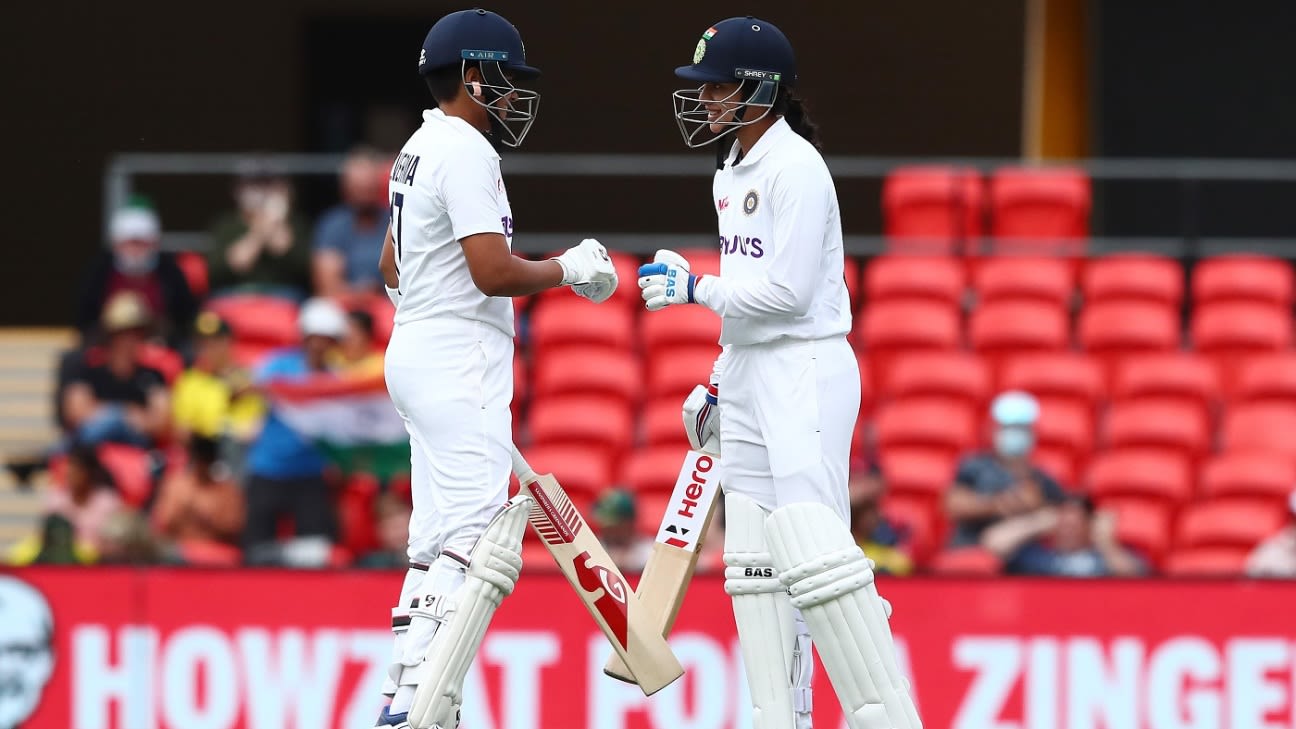 A boundary-studded half-century from Smriti Mandhana provided India a terrific start to the day-night Test after they had been put into bat although they were given a helping hand by Australia who missed three chances to remove her opening partner, Shafali Verma.

By dinner, India had reached 101 for 1 with Australia able to dry up the scoring rate in the second hour which brought the reward of Shafali’s wicket when she was taken at mid-off against Sophie Molineux, trying to go over the infield. It ended an opening stand of 93 which followed the 167 the pair had added against England in the first innings in Bristol earlier this year.

Shafali’s three lives came on 3, 19 and 25. The first was a tough, low outside edge to Meg Lanning at first slip off Ellyse Perry who produced a far steadier performance in her seven-over opening spell than she managed in the ODIs. Shafali was then dropped by Lanning again, this time off left-arm spinner Molineux, before the easiest of the three chances was put down by debutant Annabel Sutherland at mid-on.

Mandhana’s innings was full off superbly timed shots off the front and the back foot although the Australia bowlers fed her with too much width and, overall, were too short with the new ball. She had been out of the blocks quickly by pulling Darcie Brown’s first ball in Test cricket through midwicket and in Brown’s fourth over took her for four boundaries.

Brown’s opening spell ended with 4-0-28-0 while fellow debutant Stella Campbell went for 14 in her first three-over burst where the slowness of the surface negated her attempts to bang the ball in.

Such was India’s progress that Mandhana brought up her half-century inside the first hour of play and Lanning had been forced into much more defensive fields to try and slow the rate. She was given a tad more control by Molineux and Tahlia McGrath, and then by Ashleigh Gardner. Having made 70 off the 15 overs to drinks, India then scored 31 off the next 18 overs up to the break.

The pressure showed on Shafali, who had found life tougher than Mandhana throughout her innings, when she tried to break the shackles with Australia, in the form of McGrath, taking a catch at the fourth attempt. The squeeze continued until the interval with Punam Raut, who sat out the entire ODI leg of the mulit-format series, facing 22 balls for 1.

This is the first Test between the teams since 2006 and carries four points for a win in the series which currently stands at 4-2 in Australia’s favour. The home side handed out four debuts – Brown, Campbell, Sutherland and Georgia Wareham – with Mitchell Starc helping with the cap presentations while India fielded two new players in Yastika Bhatia and Meghna Singh who had both impressed in the ODIs. Spin-bowling allrounder Sneh Rana, who made a rearguard 80* against England in the Bristol Test, was left out.