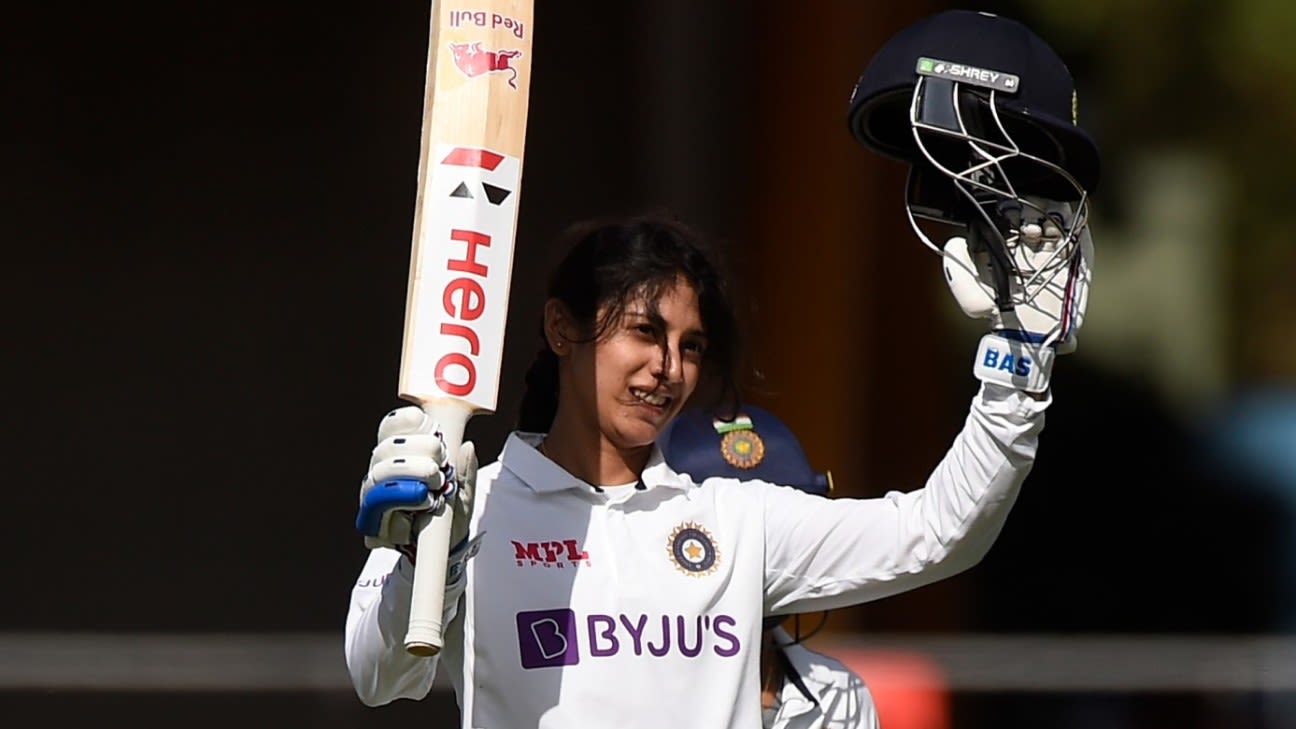 Smriti Mandhana‘s sublime century, Punam Raut walking when the umpire was saying not out and an improved spell from Ellyse Perry were the notable features on another truncated day of the pink-ball Test on the Gold Coast which is now likely to need to some ingenuity from the captains to engineer the chance of an outright result.

Australia chipped away either side of the second new ball before another ferocious Queensland storm sent the players off midway through the middle session. The forecast for the weekend is good and there will be 108 overs scheduled on both days, but the game will need to move at a pace from here. The onus, initially at least, will be on Mithali Raj if she wants to push for four points.

Mandhana had departed for a magnificently-constructed 127, ending a second-wicket stand of 102 with Raut, after which Australia made further inroads. That included the wicket of Raut who walked for a thin nick against Sophie Molineux at the same time as umpire Phillip Gillespie was saying not out, although it was not entirely clear if she had seen the initial decision. There is no DRS for this series, so Raut could have survived if she had wanted to; it provided a chance to debate the merits and spirit of walking.

Perry claimed her first wicket of the multi-format series in what was her best spell of the season to date – although she had been denied twice earlier, once when she overstepped to give Mandhana a lifeline and then when Beth Mooney dropped Raj – and shortly before the storm Raj was run out by Annabel Sutherland.

Mandhana, who resumed on 80, was given a reprieve off her second ball of the day when she drove a full toss from Perry to point where Mooney took what appeared to be a fantastic one-handed catch diving to her right. But any debate over whether it was clean was rendered moot when replays showed Perry’s no-ball.

Having said the previous evening that she would not change her game in sight of three figures, Mandhana was true to her word. She moved into the 90s with arguably the shot of her innings, a perfect straight drive off Sutherland, and it took her just another 11 balls to reach the century when she twice pulled Perry for boundaries in the space of three deliveries.

She continued to pick off boundaries, taking her tally to 22 alongside a six, the best of the ones after three figures being a drive wide of mid-off against Georgia Wareham who was finally given her first bowl on debut in the 60th over.

Ashleigh Gardner continued to offer Australia the most control – her spell in the session reading 11-6-12-1 – and she made the breakthrough when Mandhana was lured into driving to short cover.

With Mandhana departed, India had two batters together – Raut and Raj – whose natural game is a more sedate tempo. Raut continued along in her own bubble until the moment that got people talking while Raj played herself in as the new ball loomed.

Sutherland had been impressive with the old ball but, when given the first chance with the new one, a wayward over cost 11 shortly before the dinner break.

Shortly after the resumption Raj got her life on 23 when she edged Perry into the gully where Mooney shelled Australia’s fourth catch of the innings in what has been another fielding display below their high standards. However, Mooney made amends by taking a tougher chance when left-hander Yastika Bhatia, who had settled nicely on debut, was squared up by Perry’s movement with the outside edge carrying low.

Raj had played in a very controlled manner but her stay was ended by a direct hit from Sutherland after she had set off for a single to midwicket, been sent back and slipped a little. It what is likely to be her final Test, she will hope for one more innings.