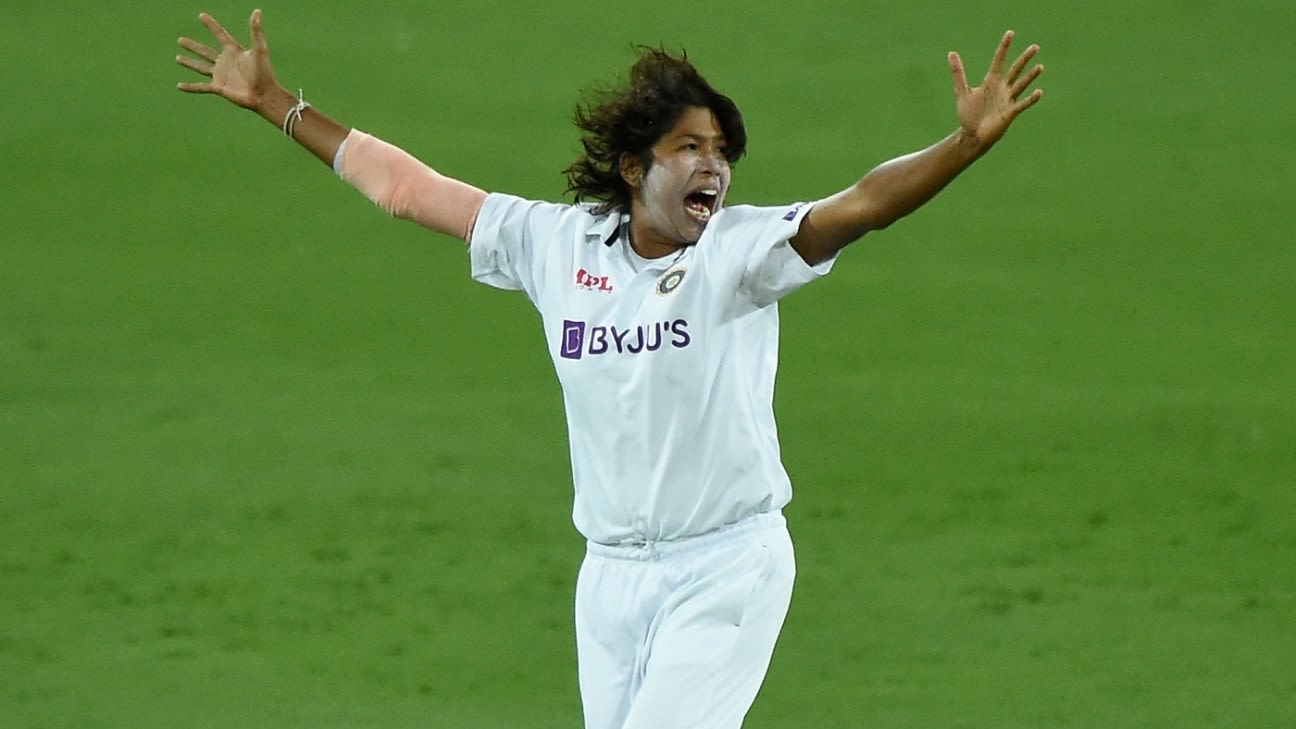 The Australia opener was full of praise for the displays of Jhulan Goswami, Meghna Singh and Pooja Vastrakar

The series has moved to Carrara, and the white ball has given way to pink, but India’s new-look pace attack has continued to test Australia’s highly rated batting line-up in their own conditions. They haven’t had too much by the way of Test-match-specific or pink-ball-specific preparation going into this game, but it doesn’t seem to have deterred them in the least.

“India, tonight with the seam, showed us what we couldn’t quite do with the new ball early in our innings,” Australia’s wicketkeeper-opener Alyssa Healy said after her team had ended day three four down and 85 runs away from saving the follow-on. “We won the toss and wanted to bowl, we wanted to make a real impact and couldn’t quite do that, I think with a little bit of inexperience around. But you’re right we did never really got a real crack at bowling under lights in that danger period that everybody talks about.”

The highlight of the twilight phase, when India had the ball, was a two-spell new-ball burst by Goswami. In the seventh over of the hosts’ innings, the pace spearhead dislodged left-hand opener Beth Mooney’s leg stump with a searing inswinger. Then, returning to the attack in the 23rd over, Goswami resumed her battle against Healy, who was now on 29.

The battle would last four more balls, and in those four balls Goswami would stamp her authority on the night.

Her second ball jagged inwards, sneaking perilously between Healy’s bat and pad. Then came a bouncer that smacked Healy’s right shoulder as she snatched too early at a pull. Before she could muster a riposte, Goswami landed the perfect outswinger, and found a fatal outside edge.

“Yeah, I did enjoy it. It was fun, but walking off isn’t that fun,” Healy said. “But I did enjoy the challenge of it. She’s got the better of me a few times in the series already.” Healy had lost her middle stump to Goswami in the second ODI. “It’s just a great sight for Test cricket. She’s obviously a world-class bowler; has been throughout her whole career and just that extra little bit of bounce that she gets being as tall as she is and unbelievably skillful with the seam, so it was a real challenge especially after spending 140 (145) overs in the field.”

Goswami’s yin found its yang in Singh and Vatsrakar who bowled 27 overs between them in a partnership that made compelling viewing. The trio’s relentless, probing lines and occasional but highly effective use of the short ball frustrated Australia’s top order in what would be the first full post-dinner session in three days as rain stayed off the radar. While Singh remained wicketless, Vastrakar picked up two, including that of captain Meg Lanning, albeit via an erroneous lbw call.

“I think they bowled beautifully under lights today,” Healy said. “They’ve got a really great seam attack and they presented that seam and let the ball do the work for them. So, yeah, it would have been nice to see our attack do the same thing. But let’s hope we see more and more women’s pink-ball Test matches. Realistically, they should be really exciting.”

While Healy and her team-mates have faced Goswami on a number of occasions over the years, they haven’t seen as much of the disciplined Singh or Vastrakar in her new role as a pace-bowling lower-order hitter.

“Their consistency has probably surprised me more than it has in the past,” Healy said. “Just the way that they’ve been able to consistently come out and bowl a really good line and length and present the seam accordingly has been really impressive and they’ve showed our relatively young and inexperienced attack just how to do it. That’s probably been the one surprise.”

That India could afford to bench the second-most-experienced quick in their ranks, Healy said, was an indication of the seam-bowling depth in Indian women’s cricket.

“It’s great to see so many young Indian players out here getting opportunities,” Healy said. “I mean, coming into game one we thought for sure Shikha Pandey was going to play and she’s someone that we’ve played against a lot and we’ve prepared accordingly for her and she hasn’t even got a look-in, which is a great sign for Indian cricket that they’ve got some depth there.”