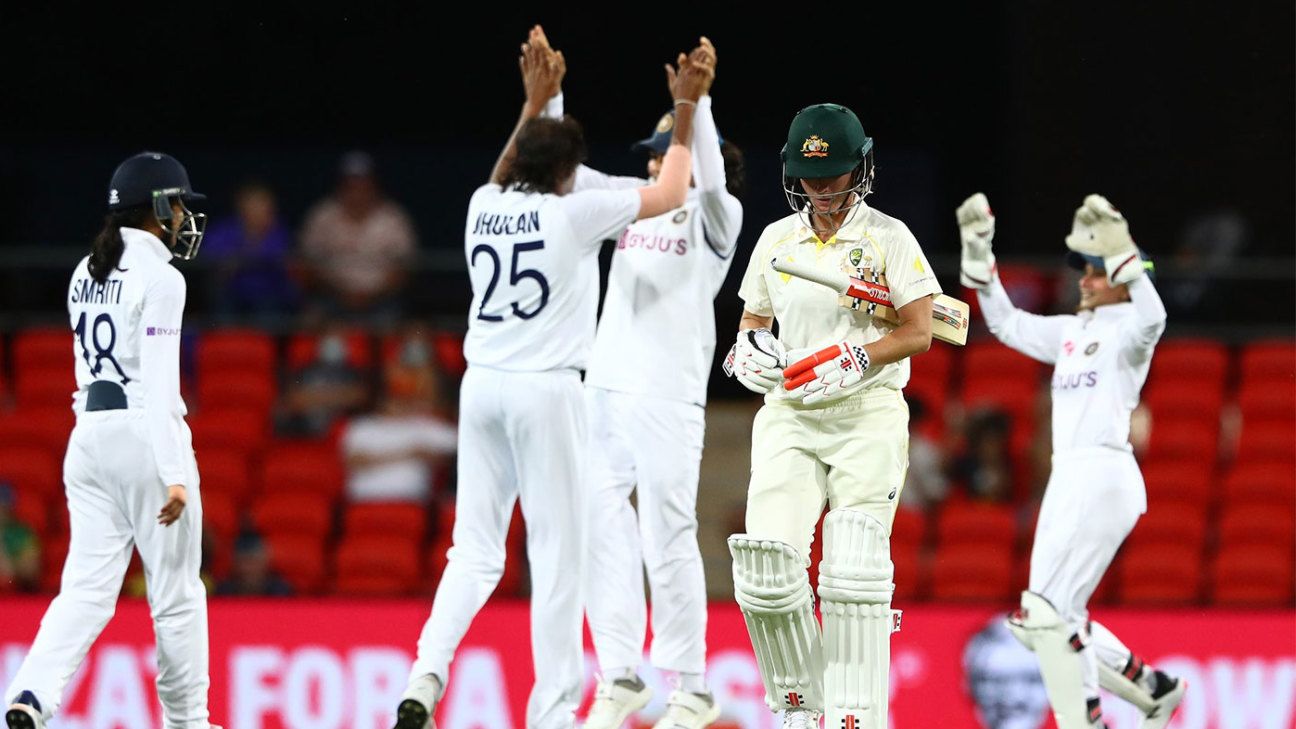 A high-octane second session in which Jhulan Goswami‘s epic two-spell new-ball burst accounted for Australia’s openers headlined day three of the standalone pink-ball Test in Carrara. Ellyse Perry, who shortly before India’s declaration on 377 for 8 had become the first woman with the double of 300 wickets and 5000 runs in international cricket, rode her luck through her 98-ball 27 to carry the hosts to 143 for 4 at stumps, 85 behind the follow-on target of 228.

A booming inswinger from Goswami crashed into left-hander Beth Mooney’s leg stump in the seventh over and when she returned for her second spell in the 23rd over, she renewed her battle against Alyssa Healy, who had creamed her for a crackling cover-driven four five balls into Australia’s innings. In her second burst, Goswami, in the space of three balls, beat Healy’s defence with one that came back in, hurled a bouncer into the opener’s front shoulder, and drew a faint outside edge with an outswinger to leave Australia at 63 for 2.

Meghna Singh complemented Goswami in a fiery 12-over pace-bowling opening charge. The pink ball, which India had their first brush with only two days out from the start of this day-night fixture, moved in the hands of the pair and later Pooja Vastrakar, who, on the night, delivered her most incisive performance with the ball in international cricket yet, taking out captain Meg Lanning – albeit via an erroneous lbw decision – among her two wickets.
Vastrakar set up a riveting battle against Lanning, who struck three fours – including a trademark square drive and an emphatic pull – en route to 17, when she survived two edges off back-to-back Vastrakar deliveries: Deepti Sharma shelled a thick outside edge at gully before a leading edge landed in an unpatrolled area at short cover.
Left-arm spin, a missing component in India’s attack in their drawn Test against England in June, was deployed to good effect in the form of Rajeshwari Gayakwad, who remained wicketless for her 12 overs, but beat Lanning’s outside edge twice, including a dropped chance by the wicketkeeper off the final ball before tea.

Goswami challenged Perry, taking an inside edge precariously close to her stumps on 2 and then beating her front-front drive’s outside edge. With Australia on 86 for 3, Perry survived an lbw appeal on 8, with replays showing Gayakwad taking top of leg in what eventually proved to be a pad-bat front-foot block.

After Lanning’s departure, a steady rebuild had ensued via a Tahlia McGrath-Perry stand, before McGrath’s uppish cut to Smriti Mandhana at point gave Vastrakar a well-deserved second wicket.

Aggressive tactical ploys from India captain Mithali Raj bookended the day’s play, both in the form of attacking field placements inside the circle and repeated insistence on swapping the wet ball with dry ones before a final burst from the three quicks post-tea.

The opening session of the day had been largely sluggish, with Australia picking up just two wickets before dinner, the second of those, Vastrakar’s scalp, being Perry’s 300th international wicket to go alongside 5000 runs. Australia also dropped two chances, which meant India gathered 83 runs in a session spanning 40.4 overs, going into the session break at 359 for 7, which had already become the highest by any visiting side against Australia.

Deepti put on 45 with Taniya Bhatia, building on India’s overnight score of 276 for 5. Before Perry removed Vastrakar for 13 at the stroke of the dinner break, Stella Campbell offered a reverie-snapping breakthrough with her second ball of the day. The tall debutant’s nagging fourth-stump line, helped by healthy bounce and carry off the drop-in surface, forced Bhatia to prod at the outswinger for wicketkeeper Healy to gobble it up, and give the 19-year-old her maiden Test wicket. She clocked 124kph with that delivery.

Having picked up her first wicket of the series in the second session of the truncated day two, Perry almost had a second with her third ball of the day. An inswinger, Perry’s yorker, struck right-hander Bhatia on toe on the off-and-middle line, but there was hardly an appeal for lbw. From that lifeline on a duck, Bhatia, playing her first match since the ODI series against England, unfurled an array of cover drives and cuts before perishing to Campbell.

Deepti then added 40 with the Vastrakar, playing mostly risk-free against spinners and pacers alike, riding on five scares since day two, including two close shaves past first-slip Lanning. The closest of them was when, on 24, she nearly chopped on and her attempt to brush the ball, rolling millimetres away from the off stump, almost put her in further jeopardy. A single off her 148th ball took her to her second straight Test fifty, the previous having anchored a rescue act against England. After she was given out when India batted on briefly after dinner, replays showed the ball had pitched outside leg. In the absence of DRS, the umpire’s call couldn’t be challenged.

With just the fourth day left in the game, chances of a second drawn Test for India this year – extending their unbeaten streak to six in the longest format – seems the likeliest outcome.