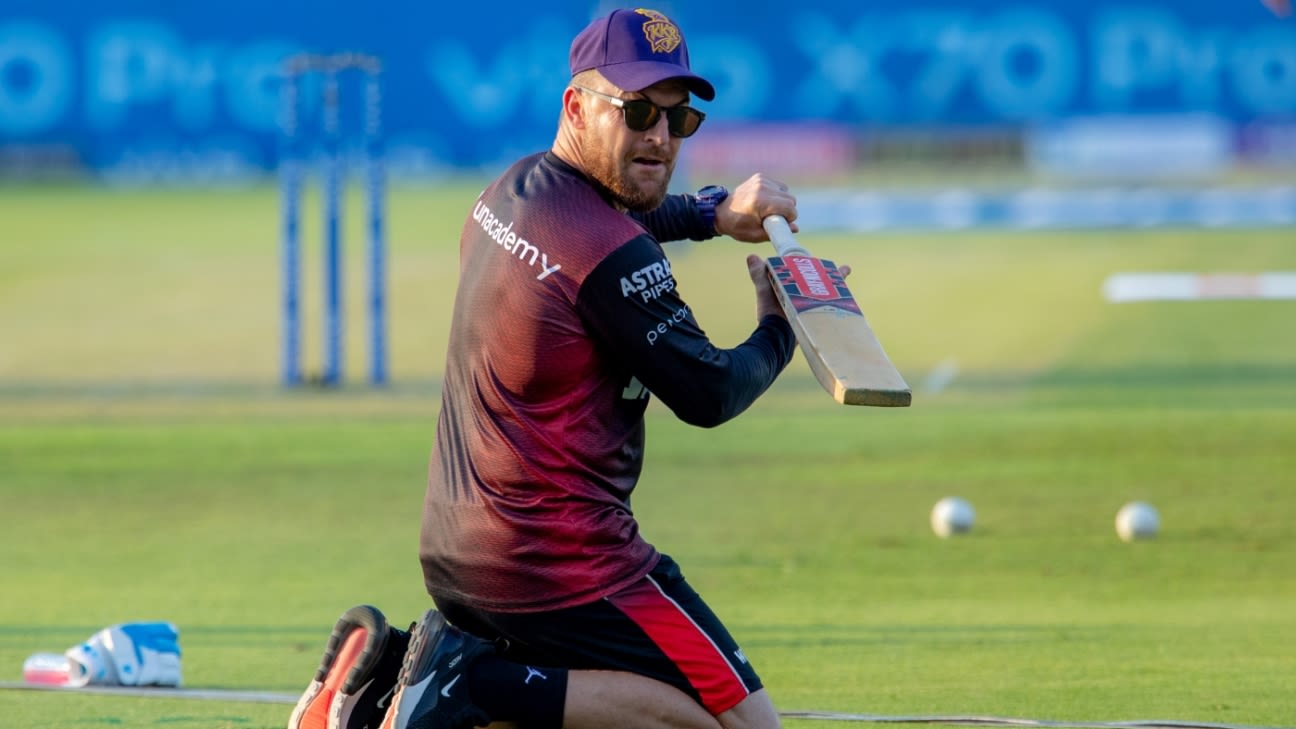 “In hindsight when we got a 165 on the board, it would have been nice to have another bowler,” admits KKR head coach

Kolkata Knight Riders are having a difficult time balancing their side in the absence of the injured Andre Russell, head coach Brendon McCullum admitted after they were beaten by Punjab Kings on Friday. Knight Riders have looked the most well-tuned side since the IPL has resumed, particularly in the early phases when they played Russell as a designated fifth bowler. But the clarity of roles in that XI has suffered since Russell’s hamstring injury against Chennai Super Kings, and Lockie Ferguson’s against Delhi Capitals earlier this week has meant some forced decisions.

Against Kings, the decision was to bolster the batting with Tim Seifert in place of Ferguson, which exposed Venkatesh Iyer to a specialist bowling role that didn’t come off. Between Iyer and Nitish Rana, 3.3 overs of the fifth bowler’s quota went for 37 as Kings sealed a win in the last over.

“In terms of the balance, when you take out a world class allrounder like Russell, it’s always difficult to balance your side,” McCullum said. “I know we got home in Sharjah the other day, we just felt a batter short and in that circumstance we felt that we could play the extra batter. We felt that we could utilise the bowling of both Venkatesh Iyer, who’s been so superb for us, and also Nitish Rana who’s a very cagey bowler. When you take one of your big players who happens to be an allrounder out, you’re always going to get the delicate balance of going either bowling strong or batting strong.

“In hindsight when we got a 165 on the board, it would have been nice to have another bowler. But not [to be] on this occasion. I still felt like we had a chance in the game, I really did. I think with two overs to go, Punjab Kings were exactly the same score that we were on in our innings. So it was touch and go, small margins in this game and today it didn’t go our way.”

Among the overseas options that Knight Riders have are allrounders Ben Cutting and Shakib Al Hasan. Tim Southee, who originally filled in for Russell, took Ferguson’s spot on Friday to effectively cut it down to four frontline bowling options. McCullum said that Shakib had been in contention, but indicated that Seifert’s batting form in the recently-concluded Caribbean Premier League had been tough to ignore. Seifert batted No. 7 on his Knight Riders debut and faced four balls, but the plan, McCullum said, had been to bat him higher.

Sign up for ESPN+ and catch all the action from the IPL live in the US. Match highlights of Kolkata Knight Riders vs Punjab Kings is available here in English, and here in Hindi (US only).

“Yeah Shakib’s certainly available,” McCullum said. “We’ve got a lot of squad options. You make calls when you’re a coach, which you sort of go on gut feel at times. Tim Seifert has been exceptional in the Caribbean where he’s been playing for TKR. He did really well in the middle order and we just felt like we needed to strengthen that middle order a little bit.

“Because we got off to a good start, we shuffled Tim down a little bit in behind Eoin Morgan and Dinesh Karthik. But yeah, look, Shakib’s always in the mix when you talk selection because his skillset, his ability to bowl left-arm orthodox and also his batting – we probably see him a bit more in the top three as a batter, but that certainly doesn’t mean he can’t slot in somewhere else. So he’ll be in the mix for the next game for sure.”

Another one of Knight Riders’ concerns at the moment is captain Eoin Morgan’s form, although it hasn’t seriously affected their batting so far. Morgan is yet to get into double-figures in four innings at the UAE, but has been effective in his leadership role. After the loss against Super Kings, team mentor David Hussey had hinted that Morgan’s spot wasn’t under pressure; McCullum was more direct in stating that.

“He’s one of our senior players, he’s one of our international batsmen, and he’s captain as well,” he said. “In his own head, he’d loved to have contributed more runs. I actually think he’s captained the side really really well, tactically. But look, you want some more runs from him, there’s no doubt you need runs from your overseas players. Particularly in those key spots as well. But I’m confident that he’ll come right.”

Despite their loss, Knight Riders ended the matchday in fourth place thanks to a healthy net run-rate. They have, however, opened the doors for Mumbai Indians to take that spot with a two-point lead with a win against Delhi Capitals on Saturday.