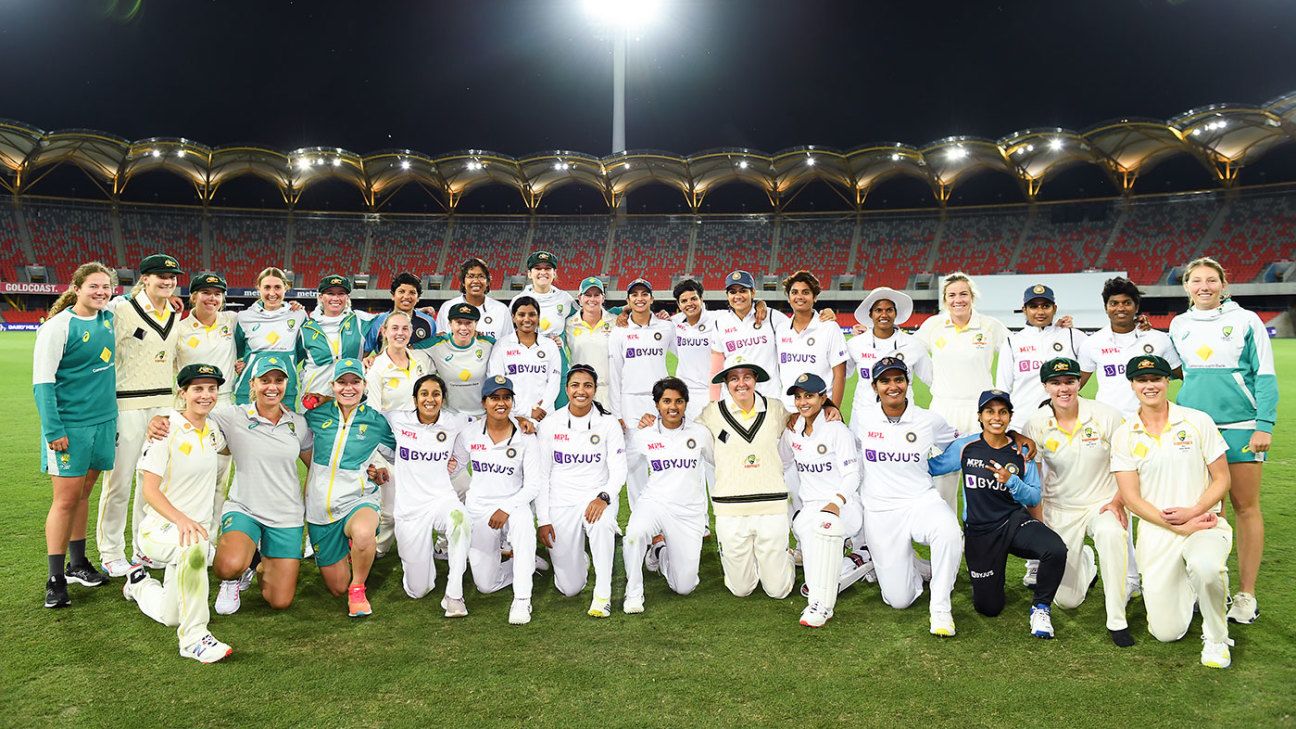 Fifteen years elapsed before the pink-ball Test pitted Australia against India again in the longest format. A fixture that kicked off with Meg Lanning winning her fourth consecutive toss of the multi-format series and sending the visitors in on Carrara Oval’s drop-in surface, witnessed three declarations, two on the final day alone, as the curtains came down on India’s astonishingly remarkable debut in day-night Tests, stretching their unbeaten streak in multi-day cricket to six matches.
The debate whether women’s Tests should have a fifth day, as was the bone of contention during and after the riveting England-India drawn Test earlier this year, gathered further topicality in the wake of rain eating into the bulk of the overs on the first two days. With only one Test in the women’s game ever having been a five-day fixture and seven out of 142 women’s Tests ever having had three declarations, as opposed to six out of 2,433 in men’s Tests, the debate for an additional day will likely rage on as Australia gear up to host England for the multi-format Ashes early next year.
India, for their part, can only play the guessing game, as they did through the seven years until June when they remained absent from longest format, as to when they might put on the whites again. Equally, whether they’ll see their captain, Mithali Raj, and Jhulan Goswami, their standout bowler from the pink-ball fixture in which her battle with opener Alyssa Healy lit up the last two evenings, take the field again in a Test match remains anybody’s guess.
Before Lanning offered Raj the draw at the drinks break in the closing session on Sunday, Goswami and Pooja Vastrakar had taken out Australia’s openers, Healy and Beth Mooney, inside 10 overs. By the time the captains shook hands, with Lanning delivering a congratulatory word to first-innings centurion and Player of the Match Smriti Mandhana, Ellyse Perry added yet another unbeaten Test innings to her name, albeit a 14-ball 1, having made 213*, 116, 76*, and 68* earlier on Sunday, in her four most-recent outings in the format.
Only when seven overs into the final session, with No. 4 Punam Raut having begun hitting the next gear in her unbeaten 41, did India declare, barely dangling before Australia the carrot of four points for an outright victory, setting them 272 to chase in 32 overs. This, after Ashleigh Gardner spiced up an evenly poised – though eventually ineffectual – second session, having plucked a blinder in the deep, inches off the ground, to remove Mandhana and break a 70-run opening stand. It wouldn’t be long before Gardner gave Australia their second wicket, bowling first-drop Yastika Bhatia. India, nonetheless, largely remained unhurried in their approach despite Shafali Verma‘s third Test fifty in four innings.
India’s second innings followed an action-filled opening session as Perry’s charmed life continued with her becoming the first Australian woman to score four straight Test fifties. Perry, who took her 300th international wicket on day three, struck an unbeaten 203-ball 68, helping the hosts weather a scintillating swing-bowling burst with the second new ball and escorted them past the follow-on score of 228. A collapse of 5 for 32, including the fall of the ninth wicket shortly before dinner break, saw Lanning declare on 241 for 9, with Australia still 136 behind.
Dropped on 58 and 61 on day four, having survived on 2 and 8 during a nervy session under lights the previous night, Perry boosted her Test average to 86.62 – the best ever in women’s Tests for a player to have batted at least 10 innings. She built on her overnight score of 27 with an attacking approach from as early as the first ball of the session, even in the face of Goswami’s mostly flawless charge in the corridor of uncertainty.
Facing an overnight deficit of 85 to avoid follow-on, Perry found able support in Gardner, who was dropped on 20 by a diving Vastrakar at gully off Rajeshwari Gayakwad. The left-arm spinner had had three previous chances shelled in the series, and remained wicketless across three innings while Perry and Gardner punished anything short and wide that came their way. In a commanding display of back-foot strokeplay, bejeweled with an assortment of cuts, the duo steered Australia from 119 for 4 to 208 for 5.

Such was their prowess that to intercept the cut, India inserted Raut in the close-in position between gully and silly point in the 18th over of the day. Gardner, in response, whipped Gayakwad past short midwicket for two runs that took her to a maiden Test fifty, the first by an Indigenous Australian woman. She would, however, last just another six balls. Driving a loopy offbreak uppishly to mid-off, Gardner perished off Deepti Sharma, Raj taking a good low catch.

India took the new ball at the 80-over mark, and their three-pronged pace attack found their day-two mojo back soon, moving the ball both ways off the seam. The scoreboard could have read 219 for 8 had Deepti not shelled a sharp chance off Meghna Singh at gully when Perry was on 58. The debutant, having taken her maiden Test wicket with a peach of an outswinger to Annabel Sutherland, wouldn’t long be away from a second wicket, though. She nipped back the next ball into the left-hander Sophie Molineux and had her trapped in front.

Vatsrakar then took out Georgia Wareham before No. 10 Darcie Brown’s first scoring shot in Tests, a four through extra cover, took Australia past the follow-on mark. Deepti had Brown caught lbw four balls before dinner.

After debutant Stella Campbell faced her first delivery in Test cricket, Lanning sprung the declaration somewhat surprisingly. A draw, however, predictably remained the likeliest result through the best part of the day. The teams eventually took home two points each, the lead 6-4 in Australia’s favour heading into the three-match T20I leg.