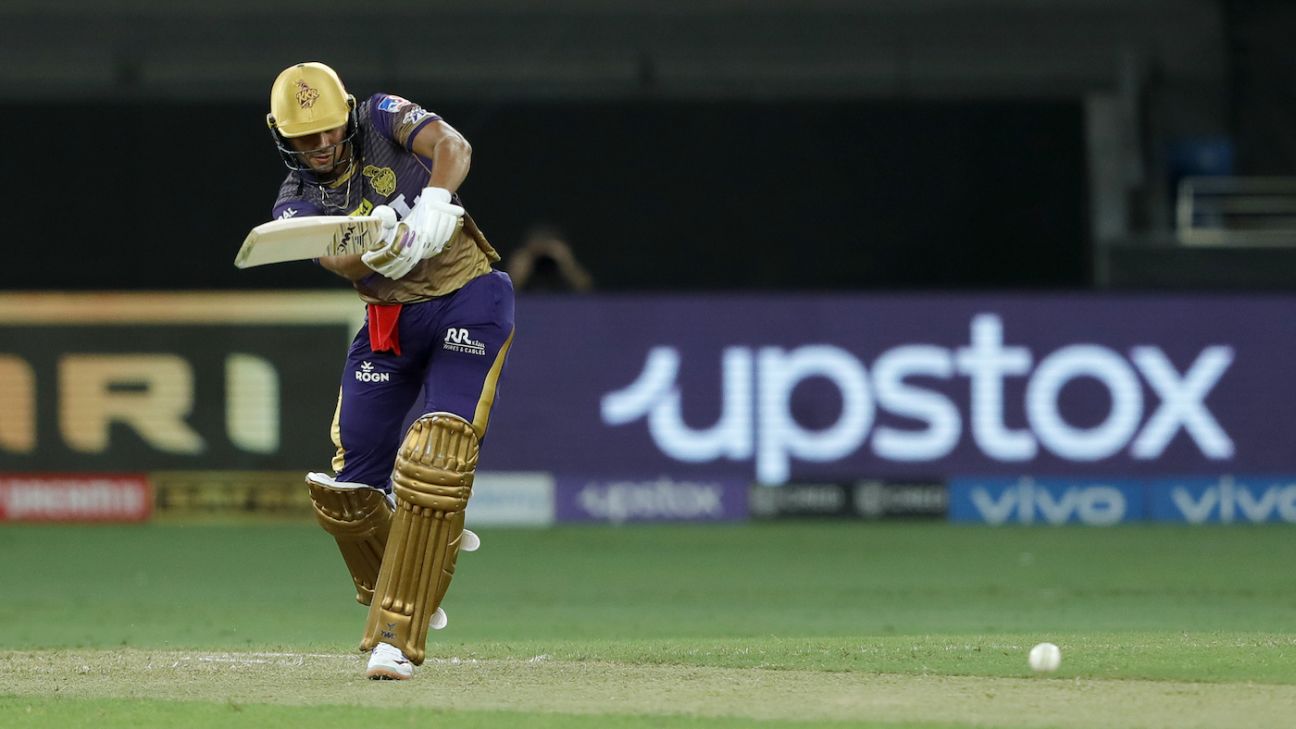 The Sunrisers bowlers made a good fist of defending 115, with the debutant Umran Malik particularly impressive

Kolkata Knight Riders simply had to win, and they kept their end of the bargain thanks to a superb bowling performance against Sunrisers Hyderabad that moved them to 12 points with one game to play. Winning with just two balls to spare meant their net run rate didn’t jump by much, but their NRR is the best among all the contenders for fourth place, which means a win in their final game should see them through in all likelihood.

Sunrisers off to disastrous start
Wriddhiman Saha was out second ball to a Tim Southee nip-backer but could have survived had he reviewed. Jason Roy, who has come in since David Warner’s ouster, looked to cut loose but was tied down by Shivam Mavi’s tight lines as he kept premeditating and missing. The frustration eventually got to him as he slapped a length ball straight to mid-on as the Sunrisers crawled to 17 for 2 in five overs.

Mavi’s figures read 2-0-4-1 when Eoin Morgan decided to gamble with a third over for the fast bowler inside the first six. He erred and got picked off. Kane Williamson took him for 18, including four boundaries: a back-foot cover drive, a slap through point, a front-foot cover drive, and, to top it off, a neat little dab past short third. It gave Sunrisers a hint of momentum.

Shakib makes an impact
Playing his first game of the second leg, and only his fourth overall this season, Shakib Al Hasan made a mark in his very first over, not with his left-arm spin, but with his athleticism. A quick sprint, a turnaround and throw in one motion at the bowler’s end had Williamson short of the crease as he tried to steal a single in the seventh over. It left the Sunrisers three down, leaving two youngsters – Priyam Garg and Abhishek Sharma – having to resurrect the innings. That wasn’t to be. Shakib had Sharma stumped with a slider in the 11th over, and finished with 4-0-20-1.

The slide continues
Sunil Narine, brought into the attack in the eight over, maintained the Knight Riders’ stranglehold. In trying to break the shackles, Garg, who could have been out on 5 had Shakib taken a simple pop-back, was out slog-sweeping to deep square for 21 to give Varun Chakravarthy his first wicket to leave Sunrisers 70 for 5. Two monstrous hits from the threatening Abdul Samad, Rashid Khan’s failed helicopter shot, and Venkatesh Iyer’s towering presence as a boundary catcher highlighted the rest of the innings as Sunrisers limped to 115 for 8. The spin trio of Shakib, Narine and Chakravarthy ended with combined figures of 12-0-58-3.

Sunrisers tie down KKR top order
In UAE, the Knight Riders have so far been able to shellack bowling attacks upfront to reduce the pressure on their middle order. But here they were given a proper workout early on. Venkatesh Iyer was beaten for pace three times before he miscued an attempted hoick to Williamson at mid-off in the fifth over. Two overs later, Rahul Tripathi erred in picking length as he swatted a Rashid Khan delivery to midwicket.

Enter Umran Malik
Talk about making a mark with raw pace. Umran Malik, the 21-year-old from Srinagar, let it rip as soon as he came on in the fourth over. Originally in the Sunrisers contingent as a net bowler and signed as a short-term Covid-19 replacement for T Natarajan, Malik bowled the fastest delivery by an Indian in IPL 2021 with the third ball of his first over, which clocked 150kph. Having made Iyer hop around, he then troubled Nitish Rana with his zip off the pitch in his second over.

This spell coincided with the Knight Riders treading a cautious path, with Rana and Shubman Gill crawling along to add 9 off 25 balls at one stage. The asking rate was creeping up, with the Knight Riders 44 for 2 at the halfway mark. With three more overs to come from Rashid, it was by no means going to be a cakewalk.

Gill shreds pressure to secure victory
After the famine came the feast as Gill changed gears. Using his feet to throw Holder off his lengths, he pulled him imperiously for two boundaries in the 12th over to signal a turnaround. He then took on Rashid and Malik, who slightly erred in trying to go full throttle. Gill soon brought up a half-century, his first of the season. When the Knight Riders took the strategic time-out at 84 for 2 in 15 overs, they were well on their way to victory. Gill and the struggling Rana departed soon after, but Dinesh Karthik and Eoin Morgan calmly completed the job; Karthik’s bullet drive first ball and a cracking cut off Bhuvneshwar crushing any little hope Sunrisers may have had.