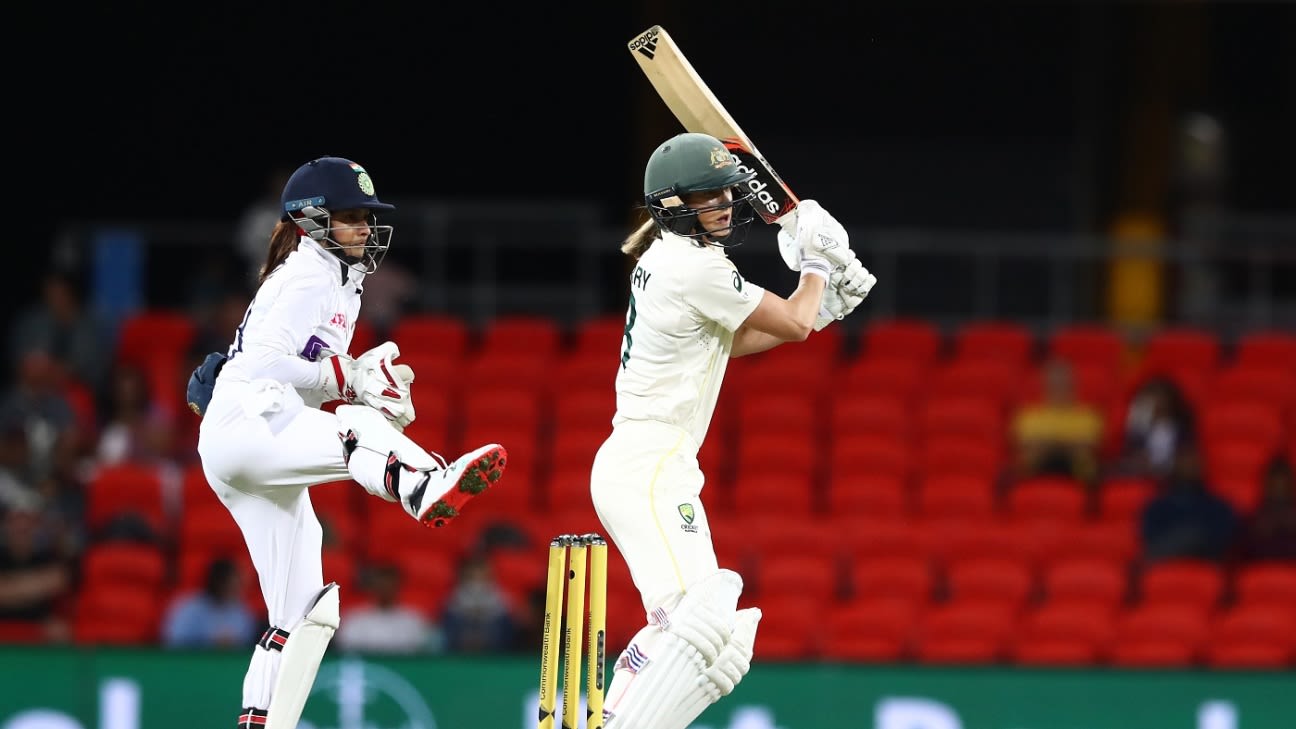 The argument that women’s Tests should be played over five days was given further weight by the day-night match at Metricon Stadium while Australia coach Matthew Mott suggested the points awarded for the game may need adjusting.

With nearly 100 overs lost to rain over the first two days on the Gold Coast it was always going to be difficult to force a positive result in the time remaining. India gave themselves a shot by piling up a big total which gave Australia 228 to avoid the follow-on, a target they ended up limping towards against the second ball. However, two subsequent declarations were more cosmetic than really an attempt to throw the game open.

“[It’s] the five days for me,” Mott said, echoing the comments he made after the 2019 Ashes Test which had also lost time to weather. “The last couple of Tests we’ve lost a full day, so you are essentially playing a three-day game on a surface that doesn’t have any wear and tear so it is difficult.

“Had this game gone another day I think we’d have seen a very good Test. A little more time in the game would certainly help everyone. If you are going devote that time, I don’t think it’s a lot to ask for one extra day.”

When the multi-format series were first introduced for the Ashes, the Test match was worth six points but that was soon adjusted when it was felt it gave too much weighting to one game out of seven played alongside three ODIs and three T20Is. Four points has been the value since 2015 but Mott pondered whether reducing them again would encourage captains to push for a result.

“Perhaps it needs a bit more discussion about whether we take it back to two so teams are willing to roll the dice a little bit more,” he said. “It’s only human, it’s the context of the series, we’d have loved to have taken the game on and done it but it’s the chance to give up four points as well.”

“In women’s cricket we tend to get judged a lot more on the number of draws, but I think if you look around first-class [cricket] in the world, a lot of times on that last day there’s some contrived result. Maybe going back to two points so there’s less to lose so it’s more of a spectacle is a better way of going about it.”

The big change that would also aid the Test game would be a multi-day structure at domestic level, something that Ellyse Perry has called a “no-brainer”, so that players aren’t being asked to learn the game on the international stage.

In the shorter-term, schedules need to find room for at least one warm-up match before the Test. The challenges of Covid meant that wasn’t possible on this tour but it is hoped that there will space ahead of the Ashes in January even if it means the full teams playing against their respective A-sides. That series will also be played in a different order, beginning with the Test and ending with the ODIs to aid with preparation for the World Cup.

Cricket Australia also expects DRS to be available for the Ashes, which would be the first time it has been used in a bilateral series in Australia. Previously it has been used in New Zealand and England plus at major ICC events. There were a number of decisions during the day-night Test that would have been reversed had the technology been in place. CA said that originally it had been hoped to have the system for the India tour, but Covid-related logistical challenges meant it wasn’t possible.