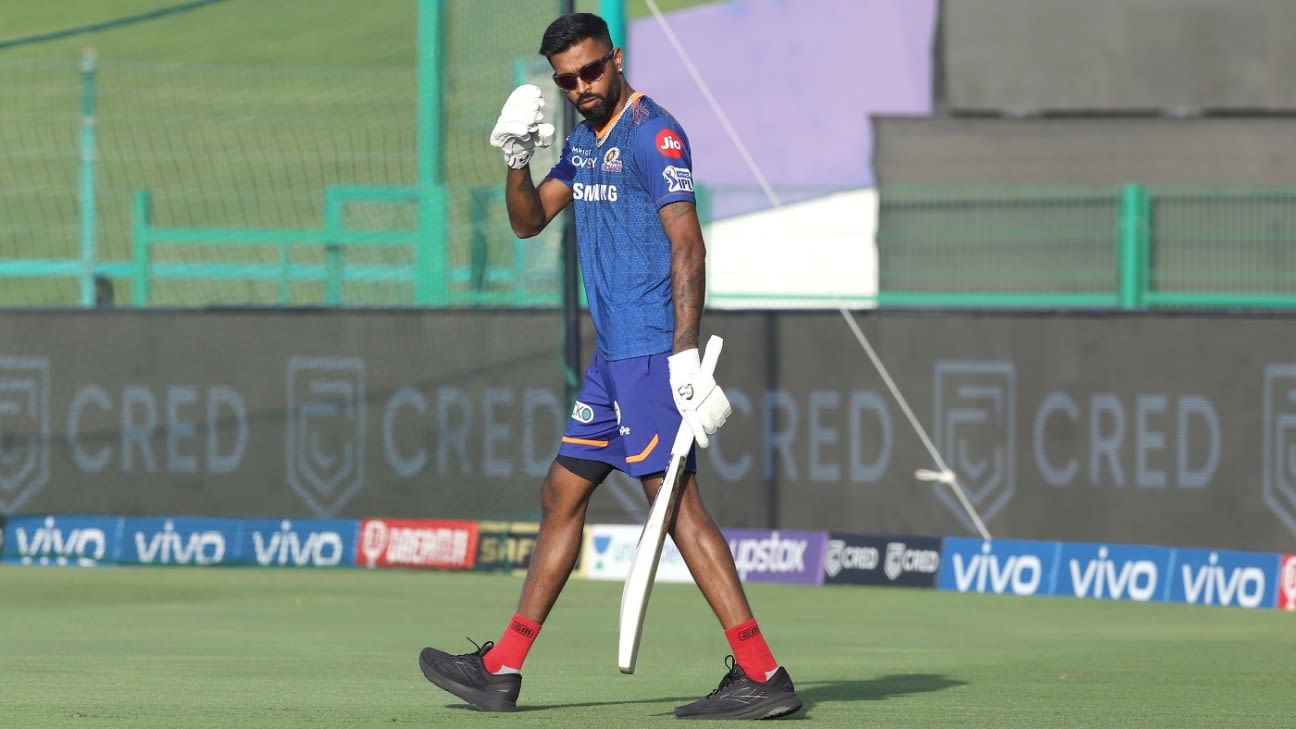 Hardik Pandya didn’t bowl a single ball in the five games he played during the UAE leg of IPL 2021, and that could be a concern for India heading into the T20 World Cup. While Rohit Sharma, Hardik’s captain at Mumbai Indians, did say the allrounder was “getting better day by day”, he also added that only medical experts knew when Hardik could resume bowling.
“The physios, the trainers, the medical team are working on him [Hardik],” Rohit said after the game against Sunrisers Hyderabad. “As of now, all I know is he hasn’t bowled a single ball yet. We wanted to take one game at a time and see where he stands. You saw he didn’t bowl today as well, but he is getting better day by day. In the next week or so he might be able to bowl, who knows. I mean only the doctors or the physios will be able to give an update on that.”

Sign up for ESPN+ and catch all the action from the IPL live in the US. Match highlights of Sunrisers Hyderabad vs Mumbai Indians is available here in English, and here in Hindi (US only).

Last week, Mumbai’s coach Mahela Jayawardene had said pushing Hardik too hard for bowling might affect his batting as well. But even without that extra workload, Hardik had a forgettable IPL with the bat, scoring only 127 runs at an average of 14.11 and a strike rate of 113.39. Rohit, however, backed Hardik, calling him a valuable asset.

“When you look at him, he’s getting better every time that he goes on to the field. A player like him is probably just one good innings away from getting back to his natural way. We’ve seen that he’s done it before as well. If I have to put everything together, I’m personally very confident of his ability and there’s no doubt that he will be a valuable asset.”

Apart from Hardik and Rohit, Mumbai Indians have four more players – Jasprit Bumrah, Rahul Chahar, Suryakumar Yadav and Ishan Kishan – who are part of India’s World Cup squad. Except for Bumrah, the other three didn’t have a particularly great IPL. Chahar took just two wickets in four games in the UAE, and Kishan and Yadav too struck form only during the latter stages.

Rohit, though, suggested not to use the IPL form as a marker. “I personally don’t like to read too much into what has happened in the IPL and what is going to happen in the T20 World Cup. The T20 World Cup is a different ball game. When you play franchise cricket, it’s different. So you cannot really compare or look too much into those aspects.

“Yes, the form matters. But it’s a different squad there, a different squad here. The way we play here is different to what we do there. So you cannot really look too much into that. Yes, all the six guys we have here would have liked to have a good run, but it didn’t happen. You saw a couple of fine performances today from Surya and Ishan. But again, when you talk about the World Cup, there’ll be a couple of practice games, and I believe the guys can get back into the rhythm.”

Talking about Mumbai’s campaign this year, Rohit said the side was looking to pick up momentum during the India leg when the Covid-19 pandemic brought the tournament to a halt. And while the players couldn’t perform as a unit in the UAE and the team failed to qualify for the playoffs, he was proud of them for winning two successive titles in 2019 and 2020.

“We had won the trophy here [in the UAE] last year, so the conditions were not alien for us,” Rohit said. “The thing was the momentum we had created with two back-to-back wins in Delhi, we wanted to continue that but unfortunately because of what was happening in the country, there was a break.

“When we came here, some of our first XI players had a few injuries and missed a couple of games initially. Despite that, we should have done better, but we just didn’t play as a team to start with, and then collectively as a group, we didn’t come together. That was the main reason for not qualifying this year.

“When you want to win games, championships, everyone needs to come together. And that is what we had been doing successfully in the last few years. That’s the hallmark of this team, to come collectively and perform. We don’t tend to rely on one or two individuals. We always believe in everyone coming together and chipping in with those performances. That didn’t happen this year. So that was a bit disappointing. But I don’t want to take anything away from the guys, we’ve had two successful campaigns back-to-back. This wasn’t our year.”