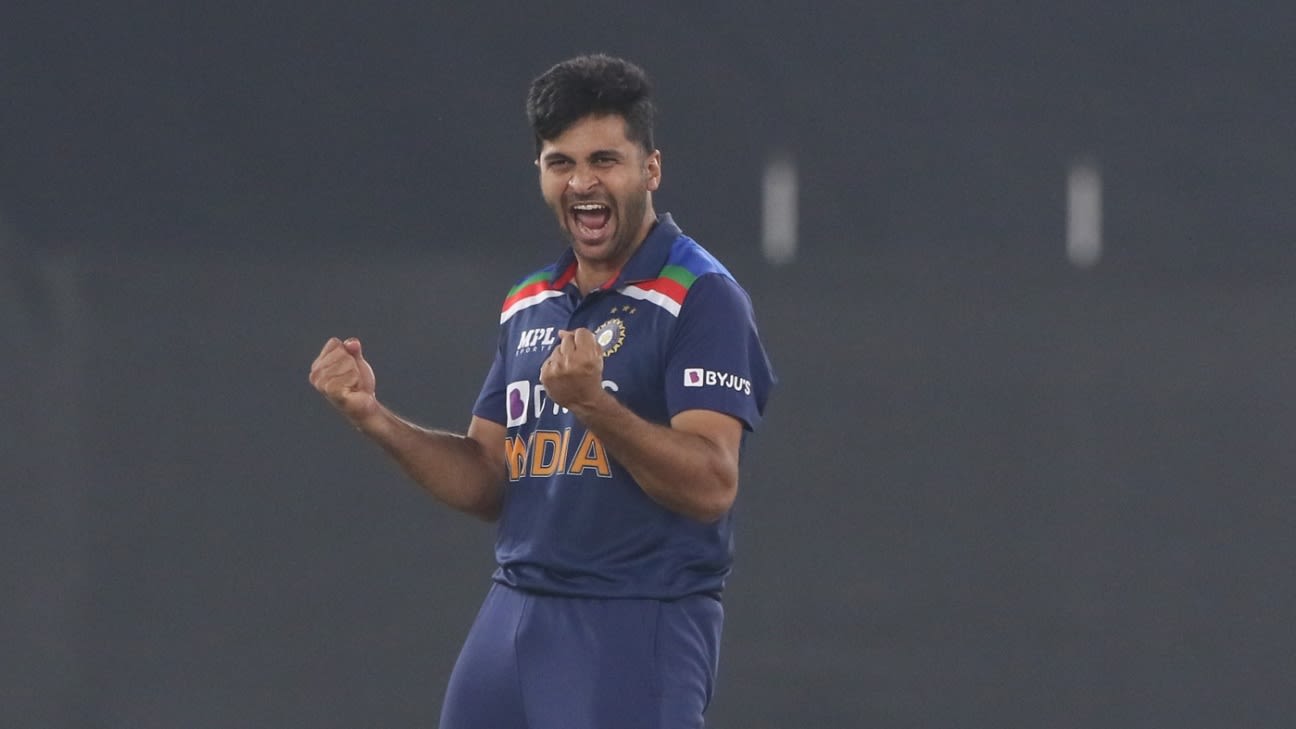 Shardul Thakur has replaced Axar Patel in India’s squad for the T20 World Cup 2021. Axar, meanwhile, joins the list of stand-by players for the squad, along with Shreyas Iyer and Deepak Chahar. The BCCI also said eight players would additionally be joining the team’s bubble in Dubai to “assist Team India in their preparations” for the tournament. These are: Avesh Khan, Umran Malik, Harshal Patel, Lukman Meriwala, Venkatesh Iyer, Karn Sharma, Shahbaz Ahmed and K Gowtham.

The T20 World Cup will be played primarily in the UAE – where IPL 2021 is also currently in progress – with some games of the preliminary stage in Oman.

Thakur has had a good IPL season with Chennai Super Kings, who finished second in the league and the won the first qualifier against Delhi Capitals to reach the final. He has picked up 13 wickets in the UAE leg of the tournament, joint third in the period. His strikes have been at key moments, which is reflected in a Smart Wickets tally of 17.5, narrowly behind Yuzvendra Chahal‘s chart-topping 17.62. He hasn’t had much opportunity to bat, but he was sent up the order at No. 4 in the qualifier against Capitals, with a view to utilising his ball-striking capacity. He, however, fell for a first-ball duck.

Thakur could slot into the seam-bowling allrounder role for the Indian team, currently with Hardik Pandya. However, Hardik didn’t bowl during the IPL, and if he’s unable to do so in the T20 World Cup too, Thakur could be in line to fill that void.

Axar has also had a good IPL overall and in the UAE leg, being particularly impressive with his economy rate. He has likely been moved to the reserves since Ravindra Jadeja would be the first-choice pick for left-arm fingerspinning allrounder in the team, and Axar provides an almost like-for-like option. Should Jadeja be injured or unavailable, Axar will come into the main squad.

Apart from the reserves, the eight players who are going to be part of the Indian team’s bubble and help with preparations are mostly pure bowlers. Venkatesh Iyer is the only one whose primary suit is not bowling, although he could well be an additional cover for the seam-bowling allrounder’s spot. Among the rest, Avesh, Umran, Harshal and Shahbaz have all been involved in the IPL and have achieved varying degrees of success.

Avesh has had a sterling season with Capitals, being entrusted with the tough overs in the powerplay and at the death, and has picked up 23 wickets in 15 games. The value of those wickets has been extremely high, as a Smart Wickets tally of 30.08 for the season shows. Harshal has topped the wicket chart with a record-equalling 32 strikes, successfully donning the role of a death-overs bowler for Royal Challengers Bangalore.

Umran turned heads with his ability to generate searing pace, and is currently at the top of the list for the fastest ball bowled in IPL 2021, clocking one at 153kph. Shahbaz was used as a utility player by Royal Challengers, chipping in with his left-arm spin and handy batting.

The trio of Meriwala, Karn and Gowtham haven’t played a match in the UAE leg of IPL 2021. However, their teams – Capitals for Meriwala and Super Kings for Karn and Gowtham – finished in the top two of the league stages.