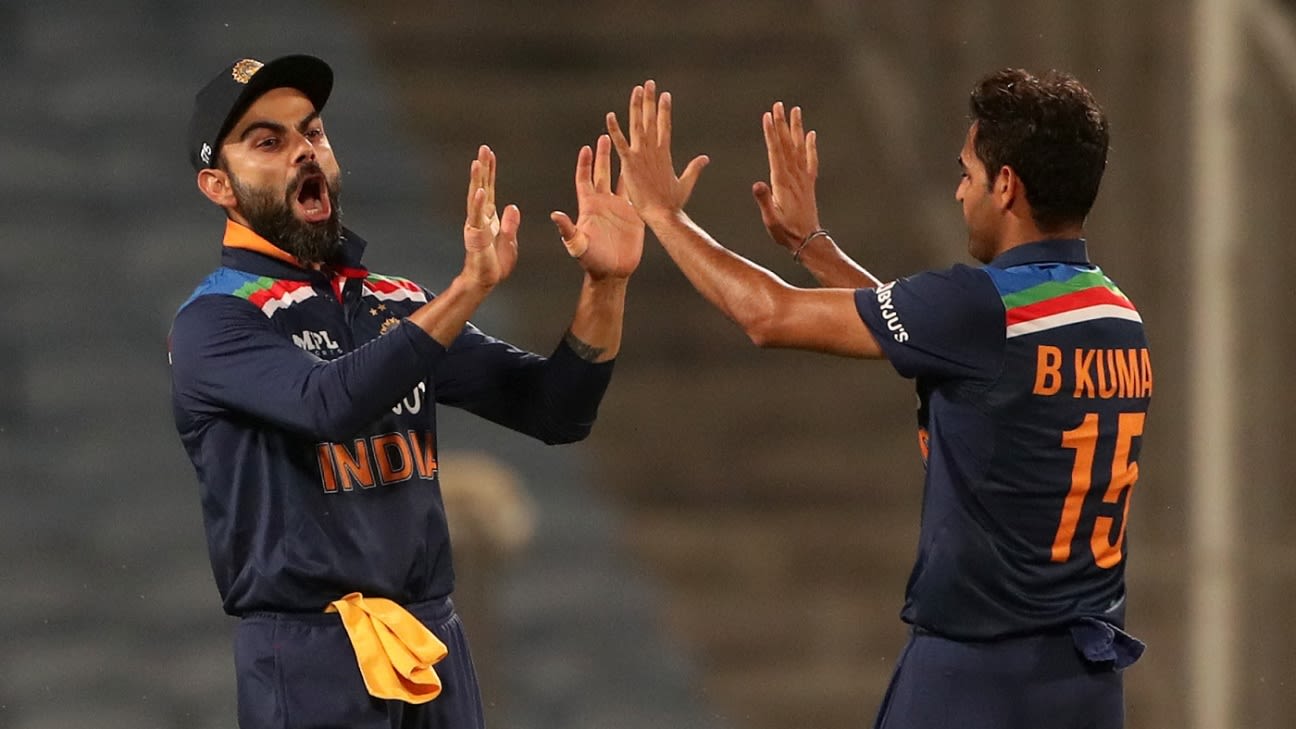 Bhuvneshwar Kumar might have endured a rough time at IPL 2021 – his economy rate of 7.97 was his worst in a season – but India captain Virat Kohli has brushed off concerns around his form in the lead-up to the Men’s T20 World Cup.
In the UAE leg of the IPL, Bhuvneshwar managed just three wickets in six games at an average of 54 and economy rate of 7.04. In isolation, however, Bhuvneshwar had denied Royal Challengers Bangalore’s AB de Villiers at the death, defending 12 off the last over in Abu Dhabi on October 6. The seamer then missed Sunrisers Hyderabad’s final league fixture with a niggle. Kohli added that Bhuvneshwar was back to his “full fitness” and backed him to come good at the World Cup.

“No, not at all [concerned],” Kohli said on Saturday. “His economy rates still continue to be top notch, something that he’s always been known for and his experience comes to the fore under pressure. If you see the game that we [Royal Challengers] played against Sunrisers, the last game, where he had to close out the game against AB de Villiers, probably one of the two or three most destructive lower-order finishers in the T20 game…

“It explained or spoke volumes of what experience Bhuvi brings on the field, whenever we play – just the understanding of hitting the areas, according to the dimensions of the field, and what balls to bowl at what time. Even the fact that he bowls lengths so well and so consistently, which is not an easy thing to get away in T20 cricket, especially with the new ball. It’s quite an underrated thing and I think his experience and accuracy has always been priceless for the team.

“He’s back to being at full fitness, which augurs really well for our team. I’m sure with the new ball, he’ll definitely get some kind of assistance through the tournament and, whatever little there’s on offer [for the pacers], Bhuvi knows how to make the maximum use out of that. So, his experience, as I said, is going to be priceless for us.”

Ashwin now bowls ‘with a lot of courage in white-ball cricket’, says Kohli

Kohli also explained why the team management went back to R Ashwin for this tournament. Ashwin hasn’t played white-ball cricket for India in more than four years. He had previously been left out to accommodate wristspinners in Yuzvendra Chahal and Kuldeep Yadav. However, neither of them is now part of India’s World Cup squad, with the team management falling back on the fingerspinners. Ashwin was back in the mix after Washington Sundar was sidelined from the England tour and the second chunk of the IPL in the UAE with a finger injury.

Ashwin’s IPL economy rate of 6.91 is the best among all fingerspinners in the league who have played at least 75 games.

“That one thing that Ashwin has really improved on is bowling with a lot of courage in white-ball cricket,” Kohli said. “If you see the IPL in the last couple of years, he’s bowled difficult overs, he’s bowled against the top players in the IPL – you know the likes of Polly [Kieron Pollard] and power-hitters – not being shy to put the ball in the right areas where spinners can kind of get intimidated by the way Polly hits the ball and the power-hitters in the IPL.

“But Ashwin believed in his skill sets and we’ve felt like the way he was bowling, his variations now, and the control over pace, is something which [gives us] a lot of experience. A guy who has played so much international cricket and now when’s at his confident best, these guys can go in there and change the game with their spells. So, hence I think Ashwin has been rewarded for reviving his white-ball skills altogether.

“We’ve been able to create a culture which I think is going to be lasting a long time where people want to be the best they can be when they enter the Indian cricket team, the fittest they can be.”

“He was a regular feature for us back in the day and then fell off a little bit because the wristspinners were the ones in demand mostly through the middle period, but now the fingerspinners with accuracy have come back into the game again. I think we also have to evolve as a team with the evolving side of the game and Ash and the likes of Jadeja as well [are performing beautifully]. The way he has gone about in the IPL as well – just being a fingerspinner and bowling with a lot of courage just augurs really well for the team.”

Why Rahul Chahar was picked ahead of Chahal

In IPL 2021, though, Chahal was the most successful spinner, collecting 18 wickets in 15 games, but there’s no place for him in India’s squad, with the side preferring Rahul Chahar‘s quickish, into-the-pitch legspin in the UAE. Kohli admitted that leaving Chahal out was a difficult call.

“It was a challenging call, but we decided to back Rahul Chahar for a reason,” Kohli said. He’s bowled amazingly well in the last couple of years in the IPL and a guy who bowls with pace. He did really well in Sri Lanka when he played recently as well and against England at home, he was someone who bowled those difficult overs. We believed that heading into this tournament, the wickets are going to get slower and slower and guys who are probably going to bowl with a lot more pace as you saw in the later stages of the tournament [IPL] were the ones who were able to trouble the batsmen, those who didn’t give the ball too much air.

“Rahul is someone who has those strengths naturally with him as a legspinner and he’s always someone who attacks the stumps and bowls in areas that can potentially get you wickets at any stage. That is the factor that tipped that balance over to Rahul little bit, not taking anything away from Chahal who has been brilliant when he has played for India. This was a tough call – that’s what picking a World Cup squad is always like. You have a limited number of spots and you can’t potentially have everyone fit into that squad.”

Dravid the next India coach? ‘No idea what’s happening on that front,’ says Kohli

Kohli has decided to step down from T20 captaincy after this World Cup and there will be another change at the top, with 59-year-old Ravi Shastri’s term as head coach set to come to an end due to age restrictions. Rahul Dravid is likely to replace Shastri after the tournament, but Kohli deflected questions on the matter.

“Our ultimate goal is to win the World Cup,” Kohli said. “I honestly have no idea about what’s exactly happening on that front yet. We haven’t had any detailed discussions with anyone, but winning the World Cup is definitely our goal like any other team. But, I think, what we’ve been able to create in the last five-six years is beyond titles and tournaments to be honest. We’ve been able to create a culture which I think is going to be lasting a long time where people want to be the best they can be when they enter the Indian cricket team, the fittest they can be, and that culture we’ve driven with utmost passion and utmost honesty, which we hope will continue to be the case in years to come.

“But, yes winning an ICC tournament will definitely be a wonderful moment for all of us, for him as coach and me as captain. It’ll be an amazing achievement and something that we’re absolutely motivated to do so and we’ll give everything that we have.”