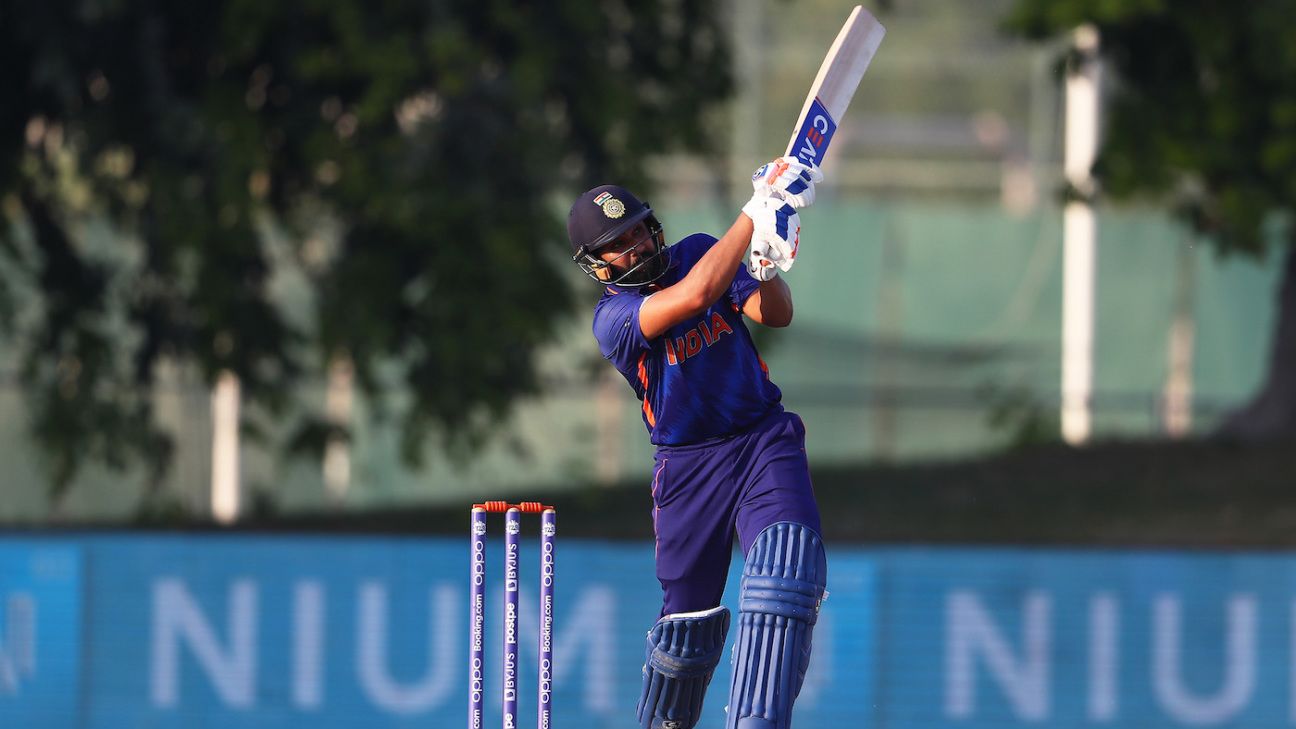 A rollicking fifty by Rohit Sharma led India to a comfortable nine-wicket win against Australia in both teams’ second – and final – warm-up game ahead of their main T20 World Cup campaign. India’s bowlers, led by R Ashwin‘s 2 for 8, had kept Australia to 152 for 5, and the batters then motored through the chase.
Rohit retired out after getting to 60 in 41 balls, leaving Suryakumar Yadav to apply the finishing touches to a chase that had been well set up by an opening stand of 68 between Rohit and KL Rahul.
Rohit had captained India in this game, with Virat Kohli sitting out of the batting innings, though he did play an active role in the first innings, being on the field and even bowling two overs.
India had Australia in early trouble after Aaron Finch had chosen to bat first, reducing them to 11 for 3 in the fourth over, striking with spin through Ashwin and Ravindra Jadeja. India had rested both Jasprit Bumrah and Mohammed Shami in this game, and turned to the spinners for half of the powerplay overs. Ashwin, sharing the new ball with Bhuvneshwar Kumar, made an immediate impact, having David Warner lbw for 1 and then Mitchell Marsh caught at slip next ball to rock Australia early.
An over later, Jadeja trapped Finch in front, and it was left to Steven Smith and Glenn Maxwell to rebuild. Maxwell was uninhibited despite the loss of wickets, playing his reverse hits whenever he saw an opportunity. The two had added 61 runs in 52 balls before Maxwell dragged on against Rahul Chahar.
Australia found a bit of a finishing kick via Marcus Stoinis, who stayed unbeaten on a 25-ball 41, while Smith also picked up his pace in the death overs, to drag the score beyond 150.

India used seven bowlers, but Hardik Pandya was not among them. However, with Kohli turning his arm over, it suggested India were looking at giving themselves bowling options.

India’s chase was largely untroubled, Rahul reprising his attacking role and not reining himself in as he has done often in the IPL. He didn’t always connect with his attempted big hits, but the intent was unmissable. He had three sixes, and was out trying to hit another to Adam Zampa for 39 off 31.

Rohit had started rapidly and then played anchor, but he sped up again once Rahul was out. He was on 28 off 25 when Rahul fell, and blasted 32 from his next 16 balls. He retired when 26 were needed in the last 30 balls, allowing Hardik to have a hit. Suryakumar stayed unbeaten on 38 off 27.

Ishan Kishan, the back-up opener, has also been in terrific form, but it seems likely he’ll not be in the first XI. Suryakumar and Hardik getting time in the middle further pointed to them being part of the team’s preferred starting XI.

Like India had done, Australia also used the warm-up game to allow overs under the belt for a variety of bowlers, using eight overall in 17.5 overs, though none of them posed any sustained threat. However, their key takeaway was Stoinis bowling two overs after recovering from an injury.

Australia will open their T20 World Cup campaign against South Africa on October 23, while India will face Pakistan in their first game, on October 24.