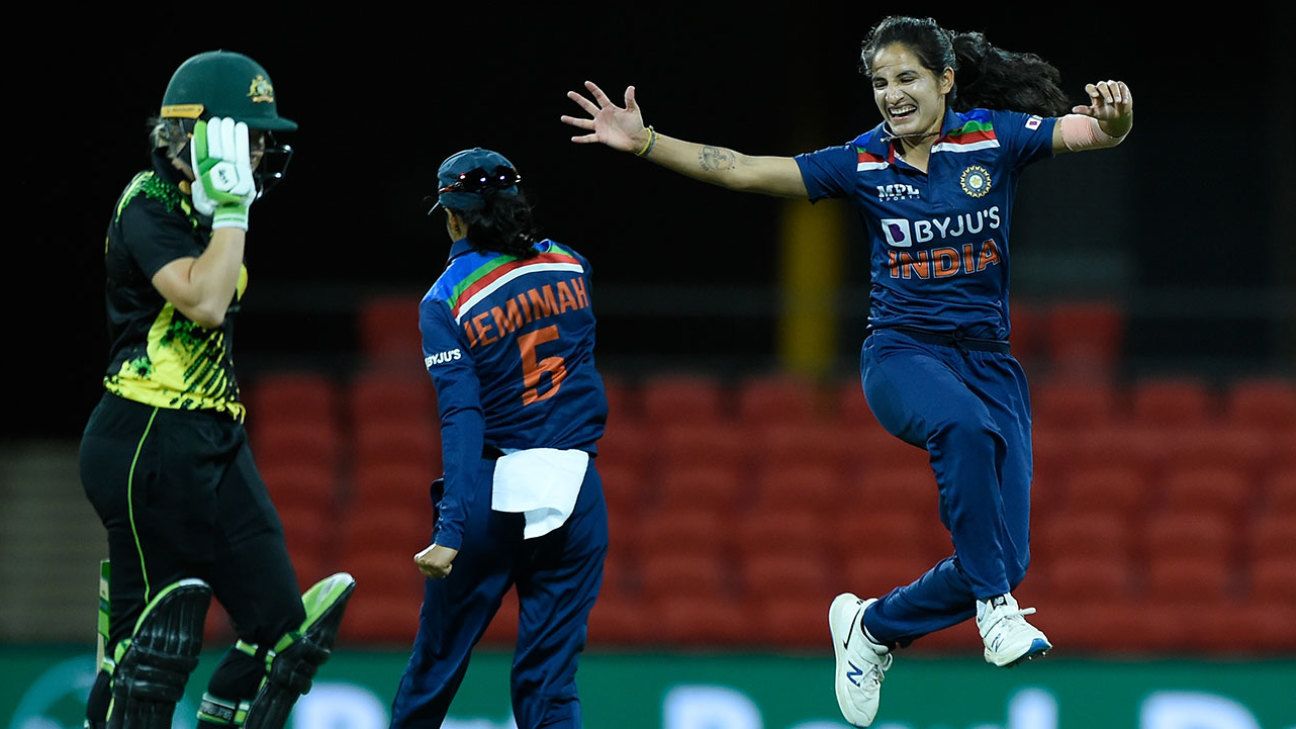 To outperform the Australian quicks on their home soil was among India’s standout achievements on their recently concluded tour of the country. That is the view of Smriti Mandhana, who also singled out the lower-middle order’s contribution in the seven-match multi-format series, which Australia won 11-5 on points, as a reflection of how “we are all working very hard on batting”.
“We had so many positives,” Mandhana, the highest run-scorer in the series, said during a Clubhouse session on Thursday ahead of the final of Red Bull Campus Cricket’s first-ever women’s edition. “Everyone did well, especially the bowling. Pace bowling was one department where we were way better than the Aussies, which is a huge thing for an Indian team to come to Australia and outplay their bowlers, outplay their pacers, which was so amazing to watch”
Mandhana, who was India’s vice-captain across formats with Harmanpreet Kaur missing the ODIs and the Test, heaped praised on their quick bowlers whose spectacular display of swing and seam kept the pressure on Australia’s vaunted line-up for extended of periods of play in the three ODIs, the standalone Test and the two matches of the three-T20I series India bowled in.

The experience of playing under lights, in whites, with the pink ball, was a dream come true

Equally significant are the handy cameos that have started to come from India’s lower order ever since their tour of England this June. Champion teams usually have resources all the way down to No. 11 and Mandhana was well aware of it.
“Australia have always had good batting depth,” she said. “Big thanks to Big Bash, which has had a huge role to play in that,” she said. “I actually never knew, until I played in the Big Bash, that Sophie Molineux is an opener. Last season (2018-19) when I came over [to play for Hobart Hurricanes] and saw her open for Melbourne Renegades, I was, like, ‘Oh, she bats No. 8 for Australia.’ Then I realised that their batting depth is amazing.
“It’s a conscious effort from all of us to have good batting depth. Especially in T20 and ODI formats because in white-ball cricket we might lose a few wickets and it shouldn’t always be top heavy. We should have a lot of contributors. Our lower-middle order is contributing a lot and has done amazingly in the last two-three series. And you could see that [in how] Jhulan di finished the match for us in the third ODI, which was really amazing. It showed we are all working very hard on batting, especially getting our Nos. 7, 8, and 9 to bat.”
Mandhana finished the tour with a chart-topping 352 runs. Her maiden Test century helped put India in a commanding position to win India first-ever day-night Test before it culminated in a draw partly because of bad weather.

“[If] Results would have gone differently for us, it would have been better for the Indian team. Rain played a bit of spoilsport in the Test match and also the first T20I, which we were in a very good position to win. Not blaming the rain, but things would have been maybe different if the rain would have not happened, Mandhana said, jogging her mind back to finishing 20 short of her hundred on day one of the Test in Carrara.

“Rarely do we find ourselves remaining unbeaten overnight in Test [because of the rarity of women’s fixtures in the longest format]. Especially knowing me as a batter, for me to be on 80 not out at the end of the day is very rare, in any format,” she said. “It was like a first experience for me to be 80 not out [overnight] because I had no prior knowledge of how to approach the next day: should I start from zero, should I start from 80? How do I warm up, because we are used to starting from zero? So, I barely slept that night. I could sleep maybe till 3:30-4am after which I was just staring at the walls.”

Mandhana batted for more women’s Tests, especially if they can be slotted within the multi-format structure, where white-ball games are worth two points and red-ball games worth four.

“We, as women cricketers, just love playing red-ball cricket and now with the pink ball as well, so, it will be cool to have a lot more of Tests, especially multi-format series, she said. “It will also give a lot of substance to the only Test match because it has four points, which adds a lot of value to it.”

“We were happy we got two Test matches in the span of three months. It was a good experience of playing one in England and one here. I’m absolutely in love with this multi-format series. I think it gives substance to all the matches we play, whether it is three ODIs, one Test and three T20Is. Sometimes you lose two matches and think the series is lost, but in multi-format series you go into every match thinking there are two points to gain.”

Asked about the experience of playing a day-night Test, Mandhana said it was the fulfillment of a long-harboured “dream”.

“The best thing about playing a day-night Test was we didn’t have to wake up early to play the Test,” he quipped. “Jokes aside, it was a new challenge for all of us, we really didn’t get a lot of time to practice with the pink ball. We got only two days before the match. It was really, really amazing to get out there.

“When I used to watch men’s pink-ball Tests, never did I think I’d get a chance to play a Test, let alone one with the pink ball, day-night. Oh, wow! That was, like, crazy. The experience of playing under lights, in whites, with the pink ball, was a dream come true even though I am in the eighth year on the international circuit.”