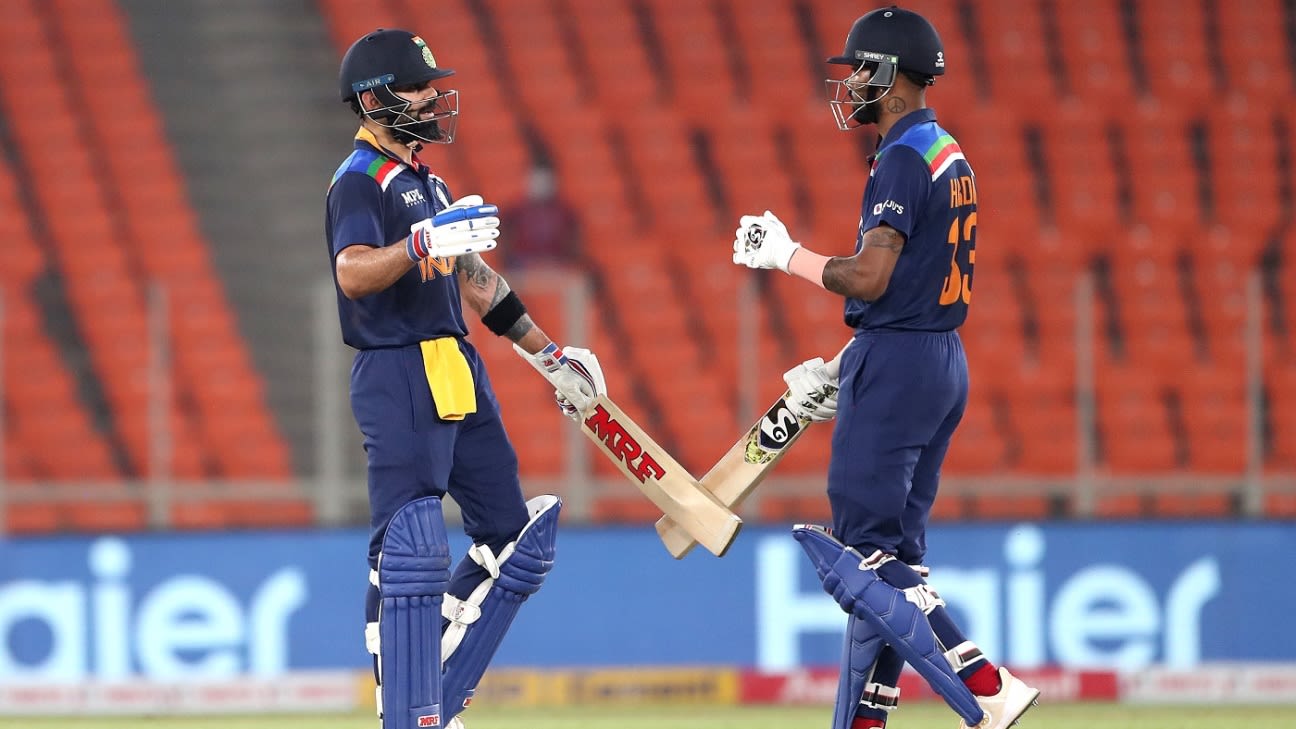 Hardik Pandya, who didn’t bowl a single ball in IPL 2021 across both legs in India and the UAE, is still not fit enough to bowl. Virat Kohli, however, has said that India value his big-hitting so much that he will start the T20 World Cup as a specialist batter. Pandya has had to deal with a long-standing back issue, which has severely limited his bowling since he underwent surgery in 2019.

“Honestly, I feel that Hardik presently with his physical condition is getting better in terms of being prepared to bowl at least two overs for us at a certain stage in this tournament,” Kohli said on the eve of India’s T20 World Cup opener against Pakistan in Dubai. “We strongly feel that we can make the most of the opportunity at hand till the time he starts bowling, we’ve considered a couple of other options to chip in for an over or two. So, we’re not bothered about that at all. What he brings at that No.6 spot is something you cannot create overnight.”

Although Pandya’s recent batting form isn’t too encouraging – he managed only 127 runs in 11 innings in IPL 2021 – Kohli pointed out that his middle-order power-hitting had played a vital role in India winning the T20I series 2-1 in Australia last year. Pandya’s finishing salvo – 42 off 22 balls – had helped India hunt down 195 and wrap up the series in Sydney.

“I was always in favour of backing him in Australia as a batter purely, and we saw what he did in the T20 series and how he can take the game away from the opposition when he is in full flow,” Kohli said. “So these things from a talking or discussion point of view seem very interesting that if he doesn’t bowl, will he be left out. But we understand the value he brings to the team as a No.6 batter, and in world cricket, if you look around, there are specialists who do that job. It’s very important to have that guy, especially in T20 cricket, who can play an impact innings at that stage. Even when the chips are down, he’s someone who can play a long innings in that way. So for us, that is way more valuable than forcing him to do something he’s not ready for at the moment.”

The pitches in the UAE for the recent IPL were largely slow and low, curbing stroke-making. While Kohli was still wary of the relaid Sharjah tracks, he reckoned that the ones in Dubai and Abu Dhabi would play better at the T20 World Cup.

“Looking at the IPL finals, I believe the quality of pitches is definitely going to be far better in this T20 World Cup,” he said. “Also it being an ICC tournament, we know that the standard of pitches has to be maintained to a certain degree, which is consistent across all venues. I understand that to protect the pitches for a tournament like the World Cup, there had to be some kind of compromise in terms of the playing conditions when we played the IPL. So, we all understood that the wicket in the IPL finals was very, very good.

“I think the dew factor is becoming prominent as we head into this time of the year in Dubai and that is also going to help the pitches play much better. I presume Abu Dhabi and Dubai are probably going to be the best pitches out of all the venues. Sharjah, more or less, will stay true to its true nature, which is slow and low. I don’t see many high-scoring [matches] unless dew becomes such a massive factor there as well.”