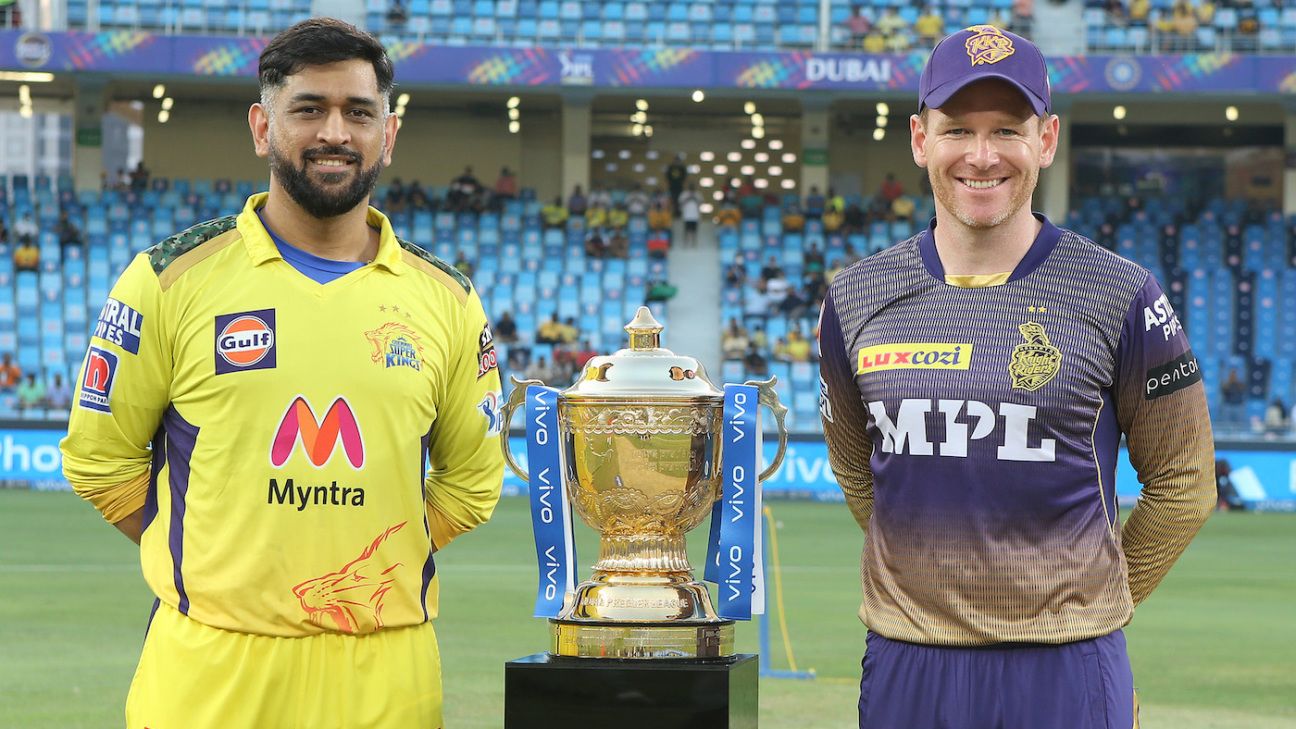 After the list of retained players is finalised, the two new franchises will get first choice from the rest of the pool ahead of the auction

A maximum of four players can be retained by the eight existing IPL teams while the two new franchises will be able to acquire three players from the rest of the player pool before the 2022 auction. While there is no confirmed date for the auction, the purse for the 2022 auction is likely to be INR 90 crore (USD 12 million approx), which is slightly more than the INR 85 crore that was available in the 2021 auction.

ESPNcricinfo has learned that there are two different combinations teams can apply while picking their four players to retain: three Indians and one overseas, or two Indians and two overseas. Also, unlike the previous big auction ahead of the 2018 season, there will be no right-to-match cards (RTM) at the auction.

The IPL clarified these rules in informal discussions this week with the franchises. The three Indians retained by franchises can all be capped, all uncapped or a mix of both.

As for the three players going to the two new franchises – Lucknow and Ahmedabad – the IPL has specified a combination of two Indian players and one overseas. What remains unclear at present is whether these players will need to be picked strictly from the group of players not retained by the existing franchises, or can be from the larger auction pool – which will have new additions – ahead of the 2022 auction.

If the two new franchises are allowed to pick only from group of players not retained by the other eight, then a player-draft system is likely to be put in place. The IPL had had a player draft ahead of the 2016 season after two new teams – Rising Pune Supergiants and Gujarat Lions – replaced Chennai Super Kings and Rajasthan Royals for two seasons while they served suspensions in the aftermath of the 2013 spot-fixing case. Back then, Supergiants got the first pick – which was Super Kings’ captain MS Dhoni – on the basis of the franchise having made the largest bid during the auction for the two new franchises.

With regards to retentions, the final choice will remain with the player: does he want to be retained or does he want to go back into the auction pool – that choice might be guided by wanting a change of franchise or if he believes he can earn a better paycheck at the auction.

While the IPL is yet to announce the details and rules, the deadline for retaining players is likely to be the end of November. Some of the key elements that the IPL is still to firm up include the maximum amount that can be spent on each retained player and the percentage of the auction purse each franchise can spend overall on retaining players.

In 2018, when the last big auction took place, teams were given a purse of INR 80 crore, and could spend a maximum of INR 33 crore on retained players. At the time teams could buy back five players through a combination of retention and two RTM cards at the auction.

If a franchise retained the maximum of three players before the auction, the deductions from from the salary cap were: INR 15 crore for the first player, INR 11 crore for the second, and INR 7 crore for the third – unless a player’s exiting salary was already higher than the cap, as was the case with Virat Kohli, who was paid INR 17 crore by RCB.

If only two players were retained, then the first was bought back at INR 12.5 crore and the second at INR 8.5 crore. If only one player was retained, then franchise would lose INR 12.5 crore from their purse. Back then, the IPL had also stipulated a salary cap of INR 3 crore for an uncapped player retained.

Big names up for grabs?

The significance of player retention is enhanced by the fact that the IPL will soon begin the process to finalise media rights for the next cycle beginning from the 2023 season; put simply, who plays for whom could make or break franchises’ fan bases and affect TV ratings. And there is the possibility of some big names, such as David Warner and KL Rahul, being up for grabs this time. Dhoni and Kohli, too, don’t have their futures clearly laid out.

After leading Super Kings to their fourth IPL title, Dhoni, 40, said his future with the franchise was not a given because he believed the franchise needed to retain a group of players who could form their core “for the next ten years”. Days later, though, Super Kings’ owner N Srinivasan said there would be “no CSK without Dhoni and no Dhoni without CSK”, strongly hinting at the franchise retaining him.
As for Rahul, there has been growing speculation about him parting ways with Punjab Kings, who did not make the playoffs this season despite captain Rahul’s top form with the bat.