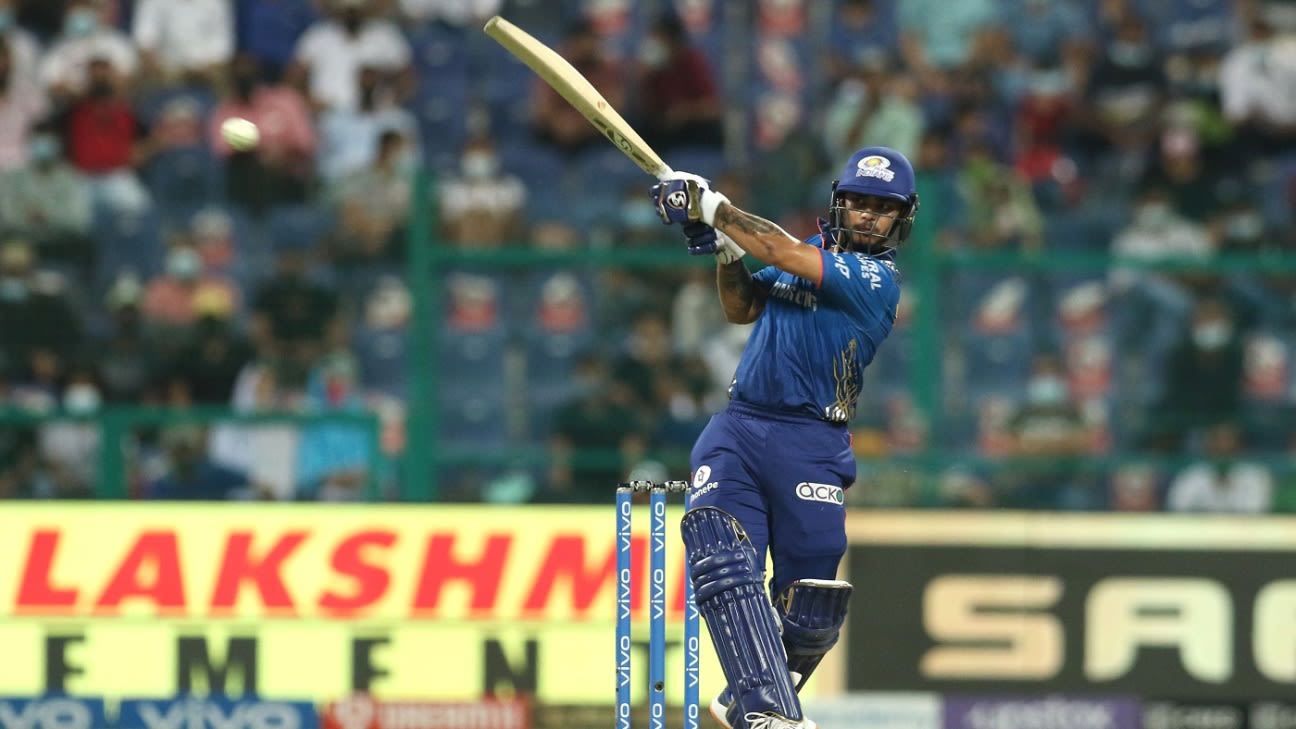 They gave the ball, and their chances at qualification for the play-offs, an almighty whack, but eventually, Mumbai Indians’ defence of their title ended in their final league game of IPL 2021. They had come into it needing to win by an unprecedented 171 runs, and although they eventually did win, that margin was always going to prove too much despite the power-hitting and skill of Ishan Kishan (84 off 32) and Suryakumar Yadav (82 off 40).

If you’re in the USA, sign up for ESPN+ and watch highlights of Mumbai Indians vs Sunrisers Hyderabad in English or in Hindi.

Two batters who had not had the greatest time in this tournament rocketed Mumbai to a mammoth 235 for 9, but that still meant they needed to keep Sunrisers Hyderabad to 65 or less. Sunrisers eventually made a decent fist of an impossible chase, ending at 193 for 8, to lose by 42 runs.

The result meant Kolkata Knight Riders qualified ahead of Mumbai, both sides on 14 points but Knight Riders ending with a superior net run-rate. They will face Royal Challengers Bangalore in the eliminator, while Chennai Super Kings take on Delhi Capitals in the first qualifier.

Mohammad Nabi opened the bowling and the first ball that Kishan faced, the second of the match, was slog-swept with extreme prejudice over deep midwicket, and he was away. Back at the top of the order, fresh off a 25-ball 50* in the last game, and with a clear mindset that Mumbai had to go from ball one to make their unlikely bid for qualification, Kishan seemed a different beast than the young man who had struggled so much that he was dropped from the XI.

Manish Pandey – back in the XI and leading Sunrisers with both Kane Williamson and Bhuvneshwar Kumar nursing niggles – tried five bowlers in the powerplay including Rashid Khan, but there was no stopping Kishan. Siddarth Kaul was crunched for four consecutive boundaries, Jason Holder’s first over disappeared for 22 runs, Umran Malik’s pace was casually thwacked. Kishan was on 63 off 22 at the end of a powerplay that yielded 83 for 1 for Mumbai. He had reached fifty off just 16 balls, the quickest of IPL 2021 and the fourth-fastest of all time in the tournament.

The end of the powerplay didn’t bring an end to the carnage, with even Rashid being smashed around. Kishan looked on track for a century when the extra pace of Malik finally did him in, with a top edge to a short ball outside off nestling in the keeper’s gloves. By the time he fell, Mumbai had racked up 124 for 3 in 9.1 overs.

Rohit Sharma: ‘We just didn’t play as a team to start with’

Given the qualification scenario they faced, Mumbai seemed to have binned their careful match-up strategies and decided that the biggest six-hitter in the dugout walks out at the fall of each wicket. That meant Hardik Pandya and Kieron Pollard came in at three and four, while Suryakumar arrived when Kishan fell, at No.5.

Where Kishan had hit his first ball for six, Suryakumar collected four, though he was helped by Holder not getting behind the ball at fine leg as Sunrisers’ fielding wore a ragged look in the face of the furious assault. Suryakumar didn’t have other batters sticking with him long enough to form substantial partnerships, but he kept peppering the legside boundary with sweeps and scoops that showcased both innovation and finesse.

If Suryakumar’s pace seemed anything but extra hot, it was only because of what had come before. He batted magnificently, matching Kishan shot for shot given he didn’t get the powerplay advantage. His fifty was raised in 24 balls, and he looked within striking distance of a century too, before holing out in the final over.

Just like they had done while batting, Mumbai started the bowling by going all out, having attacking fields and giving the first couple of overs to Trent Boult and Jasprit Bumrah, the bowlers most likely to get wickets. However, the newly-minted opening pair of Jason Roy and Abhishek Sharma took a leaf out of their opposition’s playbook, going on the attack from the outset. Both men found their timing and range, having seen what hyper aggression could do in the first innings.

Rohit Sharma also rang in the bowling changes quickly, but Roy and Abhishek didn’t let up. Although Bumrah got Roy with a well-targetted bouncer, the openers had put on 64 in 5.1 overs. Two singles in that very over meant Mumbai’s play-off hopes ended within Sunrisers’ powerplay.

Pandey, who came in at No. 3, put on a display of his shot-making ability too, another man who had endured a tough IPL 2021 coming good at the end. But for Sunrisers, the weight of the Mumbai total was always going to be a bridge too far, even though they showed plenty of intent in their chase.

In the end, Mumbai got the victory, but not the result they wanted.