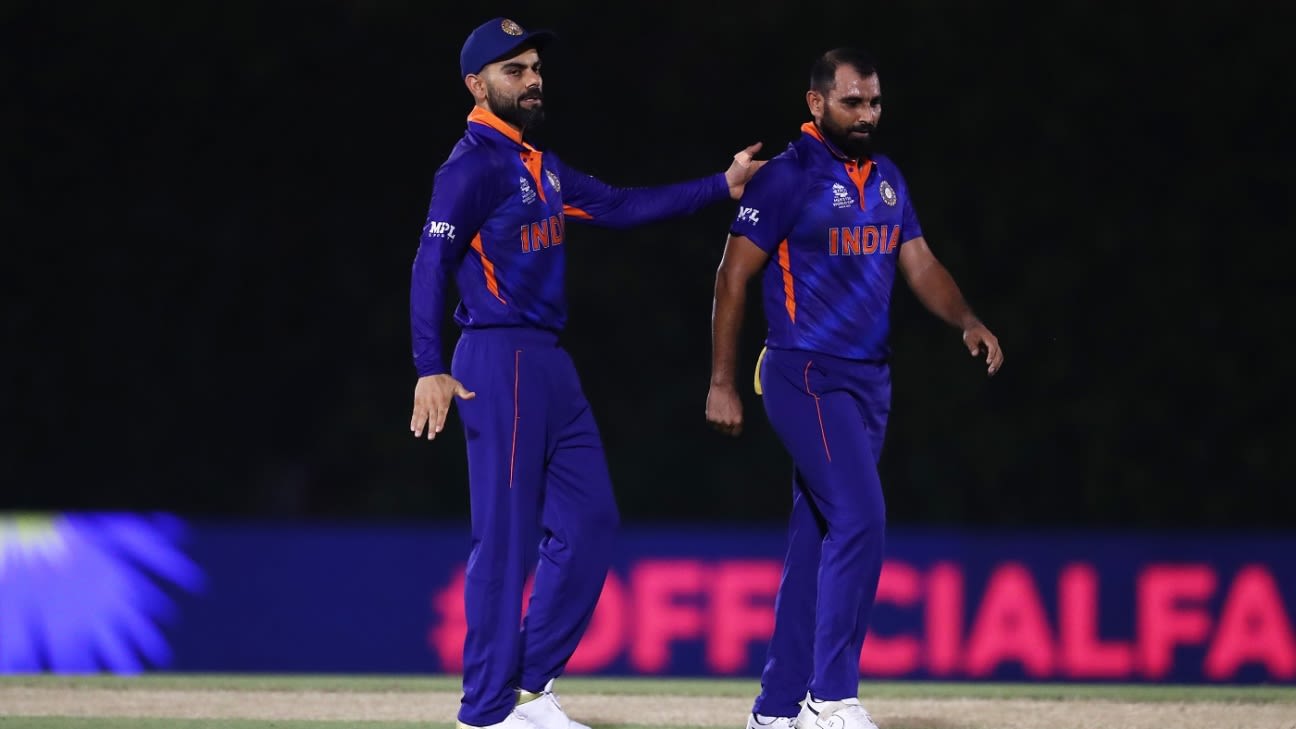 India captain Virat Kohli has hit back against the abuse that fast bowler Mohammed Shami faced on social media following India’s 10-wicket defeat to Pakistan in their T20 World Cup opener last Sunday. Shami was India’s most expensive bowler on the night, with figures of 3.5-0-43-0, and his social-media accounts – particularly on Instagram – were subjected to widespread abuse, much of it tinged with Islamophobia.

“There’s a good reason why we are playing on the field and not some bunch of spineless people on social media that have no courage to actually speak to any individual in person,” Kohli said in Dubai, a day before India’s next fixture, against New Zealand. “They hide behind their identities and go after people through social media, making fun of people and that has become a source of entertainment in today’s world, which is so unfortunate and sad to see because this is literally the lowest level of human potential that one can operate at, and that’s how I look at these people.

“To me attacking someone over their religion is the most, I would say, pathetic thing that a human being can do. Everyone has the right to voice their opinion and what they feel about certain situations, but I personally have never ever even thought of discriminating [against] anyone over their religion. That is a very sacred and personal thing to every human being and that should be left there.”

Kohli stressed that the entire team has rallied behind Shami, and that the team culture was so strong, these sort of attacks had no chance of having an impact.

“People take out their frustrations because they have no understanding of what we do as individuals – they have no understanding of how much effort we put on the field,” Kohli said. “They have no understanding of the fact that someone like Mohammed Shami has won India ‘n’ number of matches in the last few years and he’s been our primary bowler with Jasprit Bumrah when it comes to making an impact in games in Test cricket. I mean, if people can overlook that and his passion for the country, I honestly don’t even want to waste one minute of my life to give any attention to those people. Neither does Shami and neither does anyone else in the team. We stand by him fully. We are backing him 200 percent, and all those who have attacked him can come with more force if they want to: our brotherhood, our friendship within the team, nothing can be shaken. I can guarantee you that as the captain of the team, that we have built a culture where these things will not even infiltrate into this environment 0.0001%. That is an absolute guarantee from my side.”

Kohli said that those who indulged in such attacks lacked courage, and these barbs were coming out from a place of frustration and lack of compassion.

“We, as individuals, understand what we want to do on the field and the strength of character and mental toughness that we have and precisely doing what we are doing on the field,” he said. “None of these people are even in the vicinity to even imagine doing something like that. They don’t have the courage or spine to do that. So that is how I see things and this drama created on the outside is purely based on people’s frustrations, their lack of self confidence, their lack of compassion, hence they find it so amusing to go after people.

“So, we, as a group, understand how we need to stick together, how we need to back individuals, how we need to focus on our strengths. And whether people on the outside portray it: being that India can’t afford to lose a game… That’s none of our business. We play sport and we understand exactly how sport goes. How people think on the outside has no value whatsoever within our group. We’ve never focussed on it, we will never focus on it going forward either because as I said last time as well, people don’t understand what it takes to do the job on the field at the international level. We’re not going to go around and just announcing to everyone what we do and how we do it. We just carry on doing the business we’re supposed to do, and if the game goes off, you take the learnings from it and move forward.”