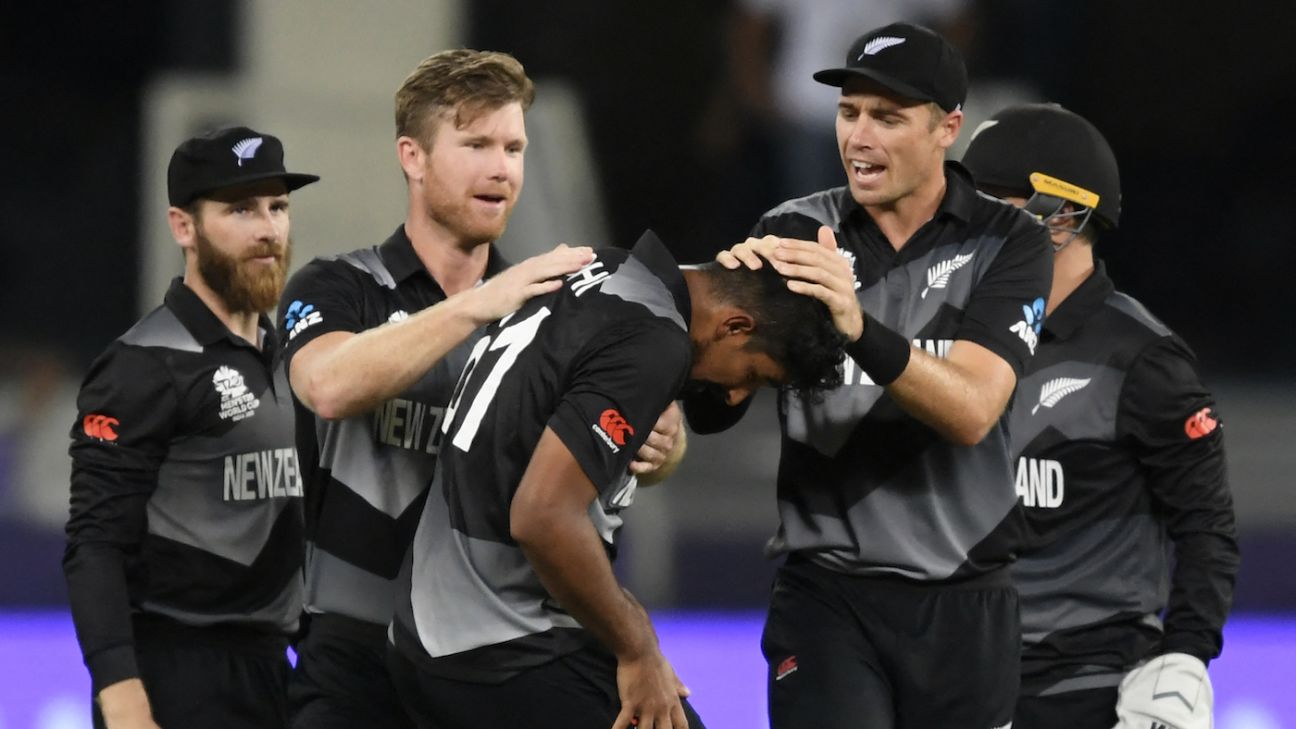 India’s chances of making the semi-finals of the 2021 T20 World Cup is in it’s complicated territory after their comprehensive defeat at the hands of New Zealand on Sunday.

Ish Sodhi and Mitchell Santner take responsibility for this stunning turn of events – geddit? – their eight overs costing a mere 32 runs while also securing the wickets of Rohit Sharma and Virat Kohli.

Sign up for ESPN+ and catch all the action from the Men’s T20 World Cup live in the USA. Match highlights of India vs New Zealand is available here in English, and here in Hindi (US only).

With Pakistan all but assured of one semi-final spot and New Zealand joining Afghanistan for the other one, India’s campaign is now at risk of coming to an earlier close than expected.

The plan that backfired

India used to play T20s like ODIs, focusing on singles and twos and believing that boundaries are just bonuses. A consequence of time spent in the middle. Then they were beaten by a six-happy West Indies in the 2016 World Cup and had to wake up.

This format demands an experiment or three. A change or five. So they invested in a different kind of player. The kind who could hit sixes from ball one. Like Ishan Kishan. He opened the batting here ahead of the established Rohit Sharma and fell in the third over. #BestLaidPlans

Early wickets are crucial against this Indian team. A lot of their limited-overs success is built on having one of the top three going deep into an innings. New Zealand did well to deny that luxury as Tim Southee and Trent Boult took out the openers within the powerplay and set the stage for the headline act.

India went 71 balls between the sixth and the 17th overs without hitting a single boundary. Such was the control that Santner and Sodhi had over this game.

The trick was in the lengths they bowled. Both spinners were careful not to stray so full that a batter could plant his front foot down and launch them out of the park. They were equally cautious about never giving them the room to free the arms as well.

Hitting that in-between spot repeatedly – while also targeting the stumps – enabled Santner and Sodhi to put so much pressure on India that they eventually crumbled to their second-lowest total in T20I history. 110 for 7.

Dubai is a tough place to set a total. Conditions are at their hardest at the start of the game before dew comes in during the second innings and helps the ball come onto the bat. Both teams were well aware of this vagary but only one of them could properly adapt to it.

Take Kohli’s wicket, for example. India were 48 for 3 in the 11th over and he’d made only 9 off 16 balls. Dire. Yes, but he needed to forget about all that and just bat the 20 overs. He needed to be like the lead in that meme that goes “this is fine” while the whole building burns. But he panicked.

Instead of playing for the back end of the innings, when it becomes noticeably easier to score runs, he succumbed to the pressure and played a low-percentage shot. Sodhi had bowled that ball – a tossed up legbreak that dipped at the last second – looking for that shot and had the Indian captain caught at long-on.

With New Zealand’s bowlers having done the lion’s share of the work, their batters were able to go out and chase the target down with zero pressure on them. Daryl Mitchell then made things even easier, top-scoring with 49 off 35 balls, as his team raced to the finish line with eight wickets and 33 balls to spare.