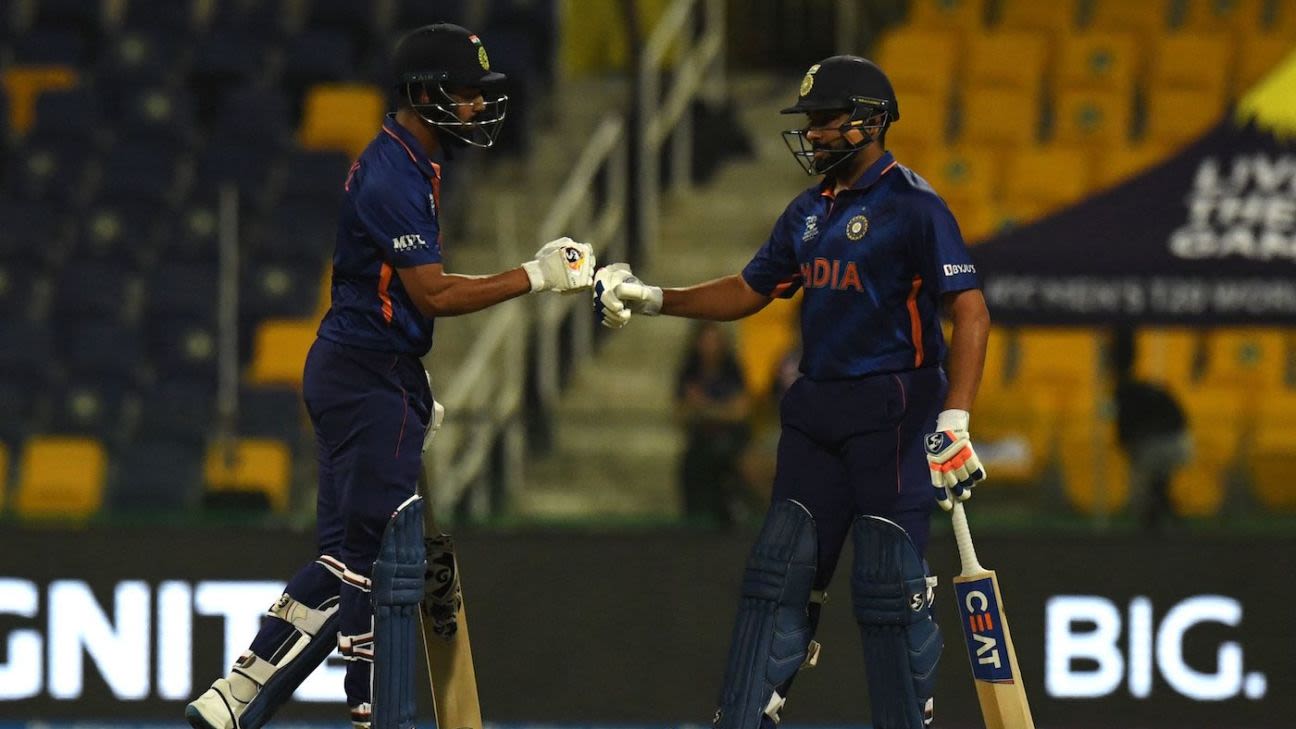 In the 2007 50-over World Cup, India followed up their crushing loss in their opening game to Bangladesh with a total blowout of Bermuda with a score of 413, the highest score of that World Cup. After two similar defeats in this T20 World Cup, India, have registered the highest score of this tournament, 210 against Afghanistan, and a big win as a result. However, India will hope that unlike in 2007, this win has some consequence. India will now hope Afghanistan upset New Zealand following which they can hope to correct their own net run-rate in the last match of the Super 12s, against Namibia.

Sign up for ESPN+ and catch all the action from the Men’s T20 World Cup live in the USA. Match highlights of Afghanistan vs India is available here in English, and here in Hindi (USA only).

Against a side missing one of their two big spinners, Mujeeb ur Rahman, India’s openers – KL Rahul and Rohit Sharma – looked more at home, putting together India’s biggest opening stand at T20 World Cups. Hardik Pandya and Rishabh Pant then provided India the finishing kick with a 63-run partnership in the last 3.3 overs. Having put such a high total, India’s bowling was too good for Afghanistan, keeping them to 144, moving into positives on the net-run-rate. Afghanistan’s net-run-rate dropped from 3.1 to 1.481.

Afghanistan field first
For only the third time in their last 16 won tosses, Afghanistan went against their formula of batting first and inserted India. There are three possible reasons for it: the tournament has been extraordinarily chase-friendly, there is heavy dew, and Afghanistan didn’t have Mujeeb. It was an interesting choice not just for these reasons but also because it spoke of their mindset. If Afghanistan felt defensive in Mujeeb’s absence, they could have batted first because you stand to lose more net-run-rate points when chasing and losing big.

On the other hand, India were looking for the win first and foremost and would have chased themselves.

The Rohit-Rahul start
It is extremely difficult to look for anything that might have been different to India’s batting when compared to the previous two games. They had no left-arm swing, no extreme pace, no mystery spin to tackle here. The only real challenge for them was Rashid Khan, and even he would be half as effective given no support for him.

As it turned out, Afghanistan opened the bowling with an offspinner against two right-hand batters, something you would never ever voluntarily do if you were at full strength. Mohammed Nabi might have got out of that first over with just seven runs conceded, but Sharafuddin Ashraf, who hardly turns his left-arm orthodox deliveries, was treated like an offspinner by KL Rahul. In just the first two overs of spin, India had hit three fours and a six; in 16 overs of spin in the previous two matches they had managed a total of three fours and no sixes.

Naveen-ul-Haq, too, was taken down in the powerplay, which India ended at 53 for 0.

Storm after a lull
Hamid Hassan bowled an excellent sixth over for just one run, which started a brief period of clawing back for Afghanistan. In the ninth over, though, Rahul ended a 20-ball boundary drought by helping a wayward Sharafuddin delivery down the leg side. Rahul and Rohit opened up again, and crucially they took down Rashid too. Rashid dealt almost exclusively in wrong’uns, and both the batters looked to hit him into the leg side. Rahul swept him for a four, and Rohit hit successive sixes: a loft over wide long-on and a slog-sweep. They both fell trying to accelerate but not before having out on 140.

Pandya-Pant finish off in style
This is the worst time to bowl to big hitters as they nothing to lose and they know there are more to come. With no real price on their wickets, Pant and Pandya hit five sixes and five fours between them to pulverise Afghanistan.

Shami, Bumrah set Afghanistan back
For Afghanistan to have any shot at the target, they needed a big start from Hazratullah Zazai and Mohammad Shahzad, but the pace and movement of Mohammed Shami and Jasprit Bumrah was too good for them. Shami accounted for Shahzad at the end of the third over, and Bumrah for Zazai at the start of the fourth, making it 13 for 2.

Jadeja, Ashwin turn the clock back
Rahmanullah Gurbaz and Gulbadin Naib slaved some of the powerplay with some lusty blows, but the spinners pulled them right back. Playing together in limited-overs cricket for the first time since 2017, Ravindra Jadeja and R Ashwin worked in partnership. With two right-hand batters in the middle, Jadeja was brought on first, but he struck in his first over to bring in a left-hand batter for Ashwin, who went on to take out the other right-hand batter first with a carrom ball. When he got rid of Najibullah Zadran, too, Afghanistan were staring at a highly damaging defeat at 69 for 5.

Nabi, Janat salvage something
Nabi and Karim Janat then played out the bowling till the start of the death overs, and then managed some quick runs to add 57 off 38 for the sixth wicket. Even though Nabi didn’t bat till the end, Janat ended up with 42 off 22 to take Afghanistan to 144, runs that might still prove crucial for one of the three teams.