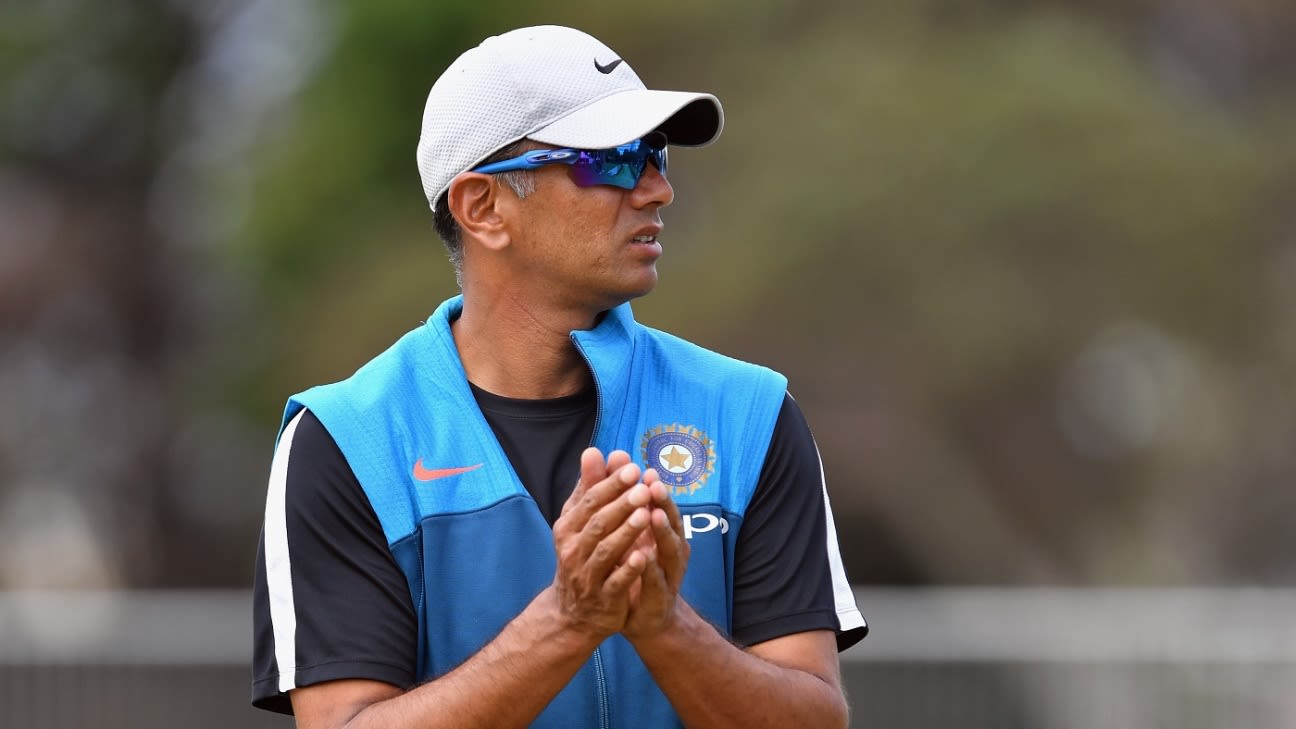 Rahul Dravid will succeed Ravi Shastri as head coach of the national men’s team after the ongoing T20 World Cup in the UAE. Dravid’s two-year term will begin with the upcoming home series against New Zealand, starting November 17.

“It is an absolute honour to be appointed as the new head coach of the Indian cricket team, I am really looking forward to this role,” Dravid was quoted as saying in a BCCI statement. “Under Mr (Ravi) Shastri, the team has done very well, and I hope to work with the team to take this forward.

“Having worked closely with most of the boys either at NCA [National Cricket Academy], U19 and India A setup, I know they have the passion and desire to improve every day. There are some marquee multi-team events in the next two years, and I look forward to working with the players and the support staff to achieve our potential.”

“Rahul’s effort at the NCA has nurtured several young cricketing talents who have gone on to represent the country at the international stage. I am hopeful that his new stint will take Indian cricket to new heights”

Dravid’s appointment – made official by the cricket advisory committee comprising Sulakshana Naik and RP Singh on Wednesday – was always on the cards after he sent in a formal application for the position. This was after he was convinced to do so by Sourav Ganguly, Dravid’s former team-mate who is now the BCCI president, along with the board’s top brass following meetings during the IPL playoffs last month.

“Rahul’s effort at the NCA has nurtured several young cricketing talents who have gone on to represent the country at the international stage,” Ganguly said. “I am hopeful that his new stint will take Indian cricket to new heights. Rahul has had an illustrious playing career and is one of the greats of the game. He has also served Indian cricket as Head of National Cricket Academy (NCA) with distinction.”

Dravid has been director of the NCA in Bengaluru following four years as coach of India A and India Under-19. Under him, India reached two Under-19 World Cup finals, losing one (to West Indies in 2016) and winning one (against Australia in 2018). At the NCA, Dravid helped set up a process for injury management and rehabilitation, as well as training programmes for coaches across the country, and developed roadmaps for age-group, men’s and women’s cricket.

In July, Dravid stepped in as interim head coach for the limited-overs series in Sri Lanka. The series was held concurrently with the men’s Test tour of England, which was helmed by Shastri. Since then, speculation has been rife about Dravid taking over full time after Shastri’s tenure ended.

Shastri, who replaced Anil Kumble in July 2017, will end his stint as head coach with many accomplishments. Under him, India became the first Asian team to beat Australia in Australia (2018-19) in a Test series. They went on to repeat that feat earlier this year. India also made a run to the final of the inaugural World Test Championship, which they lost to New Zealand. Soon after that, they took a 2-1 lead in the five-Test series in England before the series was postponed – the final Test will take place next year – because of a Covid-19-related concern in the Indian camp.
Dravid’s support staff is set to be announced in due course. Paras Mhambrey, Dravid’s colleague at the NCA, is the front-runner to replace Bharat Arun as bowling coach, while Abhay Sharma and Ajay Ratra are among those who have applied for the position of fielding coach. On Wednesday, current batting coach Vikram Rathour confirmed his re-application for the position.

Dravid takes over at a busy time, with India set to host New Zealand for three T20Is and two Tests. In December, India are scheduled to tour South Africa for three Tests, three ODIs and four T20Is. Upon their return, India will host West Indies, Sri Lanka and South Africa as part of the 2021-22 home season.

Among Dravid’s immediate challenge is to oversee the captaincy transition in the T20I format with Virat Kohli set to give up captaincy after the T20I World Cup.