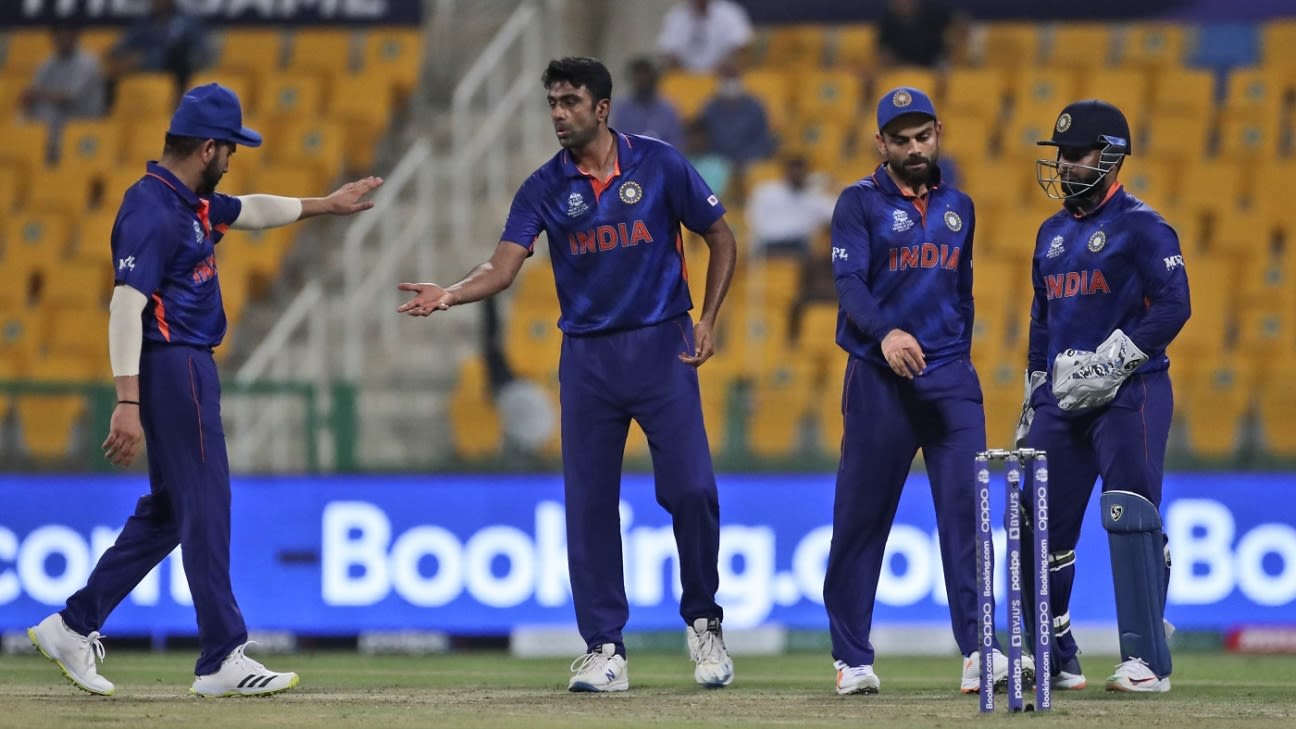 Living in the present, embracing challenges, understanding circumstances, preparing to perform at short notice, completing circles of life and understanding life patterns. R Ashwin could’ve been mistaken for a motivational speaker, but he was merely echoing his thought processes and how he’s approaching his cricket and life at 35.

On Wednesday, against Afghanistan, Ashwin was back in India’s blues for the first time in four years, a moment he said he was looking forward to for a while without allowing frustration or circumstances around his non-selection affecting him. He performed creditably too, taking 2 for 14 off his four overs that dented Afghanistan through the middle overs. It gave India bite and the kind of control they lacked in their first two matches of the T20 World Cup.

“The news of me being selected for the World Cup was heartening, I had fun hearing the news in terms of enjoying myself and the gratification of what I wanted to achieve,” he said ahead of India’s clash against Scotland on Friday. “I had special dreams getting into the World Cup, wanting to do special things for the team and after a point in time, trying to prove a point, whether right or wrong, not to anybody else but to yourself.

“Unfortunately, after the first two losses, I did feel a bit low about it, it wasn’t special, it never is when you lose game. Maybe our chance of qualification took a bit of a dent but after yesterday’s (Wednesday) win (over Afghanistan), we still do have our fingers crossed and hope things go right. But yes, barring that, it was a special night. Every single delivery that I wanted to execute fell in place.”

Ashwin fell out of favour in 2017 at a time when wristspin was the buzzword around the Indian team management as Yuzvendra Chahal and Kuldeep Yadav emerged as India’s two frontline spin options in limited-overs cricket. It was around the time Ashwin was enjoying a prolific red-ball form and peaking as a Test match bowler.

Sign up for ESPN+ and catch all the action from the Men’s T20 World Cup live in the USA. Match highlights of Afghanistan vs India is available here in English, and here in Hindi (USA only).

At first, his non-selection was termed as “rest” before it soon became evident the selectors and the team management were looking in different directions. Ashwin believes he used the time wisely to refine his skillsets that he’s now exhibiting at the T20 World Cup. Having put in the hard yards during his time away, Ashwin now hopes perception around finger spin changes.

“I can’t say circle has come around, but the perception of finger spin needs to change,” he said. “Ever since 2017, where I was going through a very good phase of my Test career, I felt like I was bowling amazing stock balls and didn’t require anything else. But like I said, the circle stops and that Champions Trophy final (Ashwin’s previous white-ball game before the Afghanistan outing) was one of those stations where I had to halt and think about my cricket.

“Ever since then, I’ve evolved as a T20 bowler, I’ve bowled a lot more many deliveries that are so subtle that people keep terming them as carrom balls, off spin and arm balls. I’m trying to create different angles to create different seam positions. The ball to dismiss Gulbadin Naib (on Wednesday) was anything but a carrom ball.

“I have worked on it, and I have got so many options [now] than what I had at that time [2017]. When I bowl to a right-hander, I think like a left-arm spinner or a legspinner, and when I bowl to a left-hander, I think like an offspinner. The thinking creates intent and intent translates into practice. Three is a lot of work that has gone there, it’s just that the consensus on what I do that needs to change.”

R Ashwin: ‘Staying humble through good periods is something I have firmly embraced’

Explaining the science of spin, analysing revolutions or dip, his loading and alignment with the crease are all aspects Ashwin thoroughly enjoys explaining. As much as he delved into the nuances of the game, Ashwin said making peace with circumstances around his non-selection in white-ball cricket, without losing the hustle, helped him find a way to evolve.

“I believe life is a circle, for some people it’s a small one, for some it’s large,” he said. “It’s definitely not in our hands. For me, understanding patterns in my life and career is something I’ve done very well over the last couple of years. Whenever I’ve had a very good s stretch of form, I’ve had deep trenches, some very long periods of lull which I don’t want to read too much into. That’s a pattern I’ve embraced.

“Staying humble through good periods of success is a statement lot of people make, but I’ve firmly embraced it and lived it. Shane Warne once said you experience success 33% of times in your career. Sachin [Tendulkar] has also echoed that at some stage, so who am I, I am no different.

“The easiest way to cope with it, to go through a professional circle like that is to keep preparing keep working hard, expecting an opportunity to turn up at your doorstep one day and when it happens you have all the options to break open doors, latches and locks. That’s what life is all about, so live for those days and keep preparing like that day will come.

“It’s easy to lose hope and motivation, come to those doors, hide behind it and keep complaining. That’s something I will definitely not do, because for me it’s not about what the game has given me. It’s about what I’ve given to the game and how much I enjoy playing the game. For me, if you put three stumps anywhere and ask me to play game at this stage of my life, I’d do it most times.”