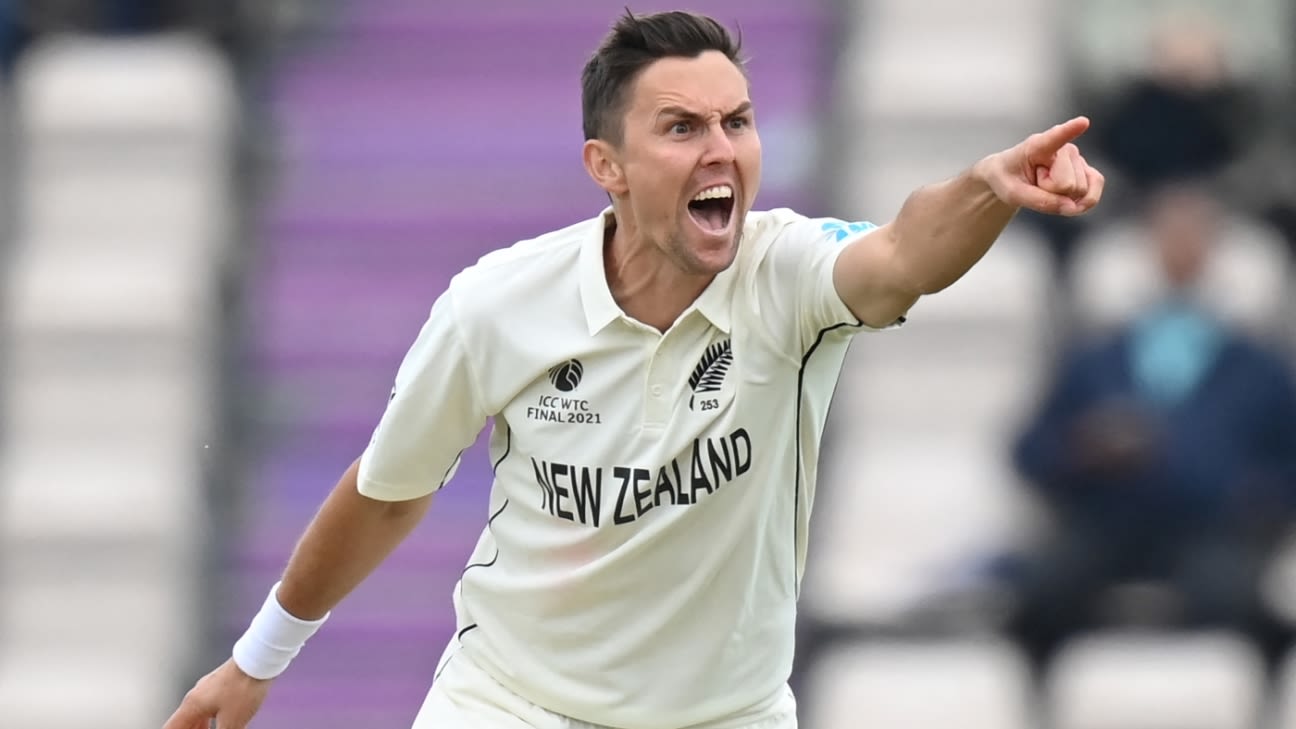 The two had asked to be left out because of bubble fatigue; Williamson-led squad has five spin options

Trent Boult and Colin de Grandhomme have opted out of New Zealand’s two-Test tour of India, while Mumbai-born Ajaz Patel is set to lead the spin attack with William Somerville and Mitchell Santner for company. The series will mark the start of New Zealand’s new ICC World Test Championship cycle; they are the defending champions, having beaten India in the final of the inaugural edition in Southampton.
Ajaz and Somerville have been exceptional when bowling in tandem, picking up 28 wickets in three Tests in the UAE and in Sri Lanka in 2018-19. In all, New Zealand have named five spinning options, including two allrounders – the uncapped Rachin Ravindra and Glenn Phillips, who is one Test old. Ravindra will be on his second Test tour, having earlier been part of the England tour in June.

The pace attack is headlined by Tim Southee, Neil Wagner and Kyle Jamieson, after Boult and de Grandhomme made themselves unavailable because of the prospect of further time in biobubbles and managed isolation.

“Trent has already spent the best part of 60 days in hard managed isolation this year, while Colin had been on the road since May until recently returning home from Pakistan,” head coach Gary Stead said in an NZC release. “From talking to both players it was clear the best option for them was to be left out of this Test tour and for them to instead focus on being ready for the New Zealand home summer.”

Tom Blundell has been named first-choice wicketkeeper following the retirement of BJ Watling after the WTC final in June. The squad has another wicketkeeping option in Devon Conway.

Stead said he expected the tracks in Kanpur and Mumbai, the venues of the two Tests, to bring the spinners into play. “Touring India is one of the greatest experiences in cricket and I know our guys are really looking forward to the challenge,” he said. “It’s fair to say we’re expecting spin-friendly conditions and it’s great to have a range of options in this department.

“The success of our spinners on recent tours to the sub-continent has been encouraging and we hope they can once again feature prominently. It’s really exciting to begin the second instalment of the WTC and we know there’ll be an extra incentive for all the teams we play following our win in the inaugural competition.”

New Zealand will begin their tour on November 17 with the first of three T20Is, in Jaipur. The Tests will be played between November 25 and 29 (Kanpur) and December 3 and 7 (Mumbai).