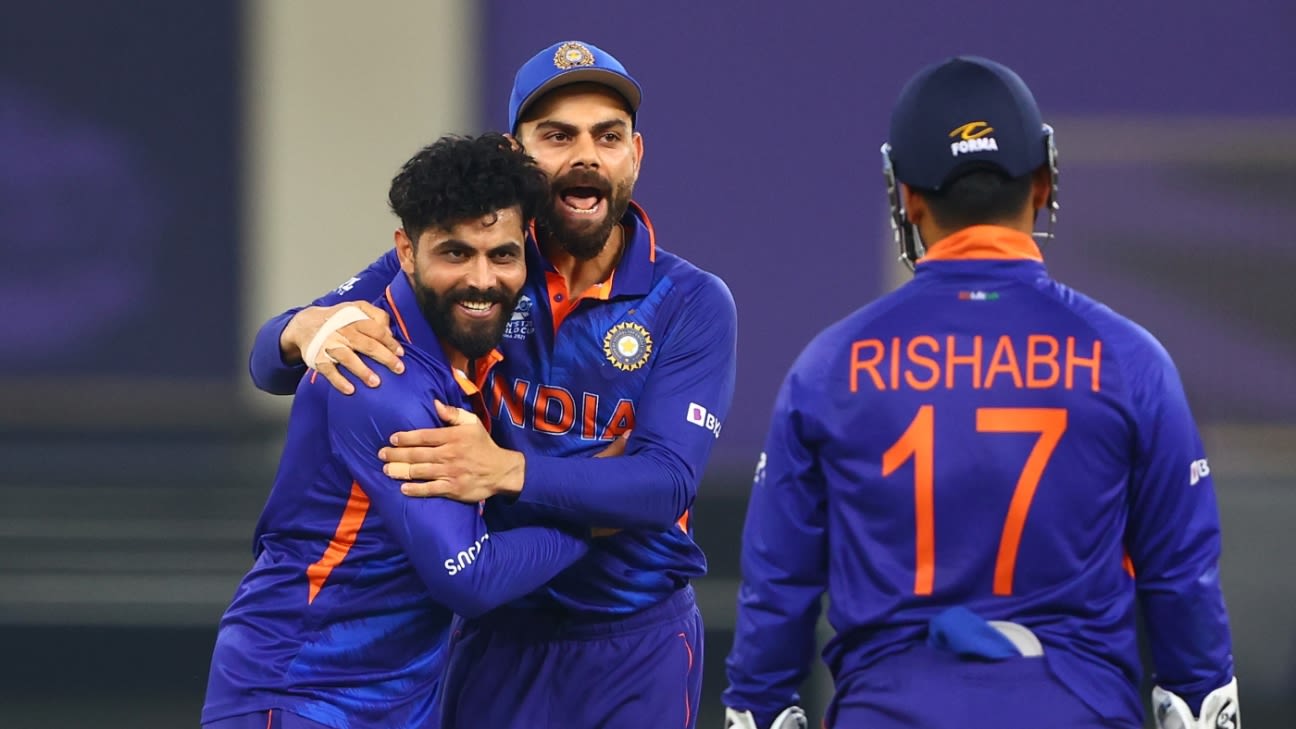 Ravindra Jadeja, R Ashwin and Varun Chakravarthy are all featuring in an India XI for the first time ever. India need to win big against Scotland to survive at the T20 World Cup. The spin trio deliver that big win on cue and in doing so they made a case for themselves to play together more often, especially on a grippy track like the one that was used in Dubai on Friday.
The pitch was used for the India-New Zealand and England-Australia fixtures earlier in the tournament, so India packed their attack with three spinners, for only the second time in T20Is since 2019. More recently, in July earlier this year, Varun, Rahul Chahar and Kuldeep Yadav played together at Khettarama during a tour that was largely an audition for the T20 World Cup.

Having missed India’s last World Cup match against Afghanistan with a calf injury, Varun recovered in time for Friday’s game against Scotland. Virat Kohli unleashed him, on a side that has never played his mystery spin before, in the second over. George Munsey tried to throw Varun off his line and length by reverse-sweeping a carrom ball for four, but the spinner then hiked his pace and tucked up Munsey, denying him the leverage to repeat the shot.

Despite conceding a boundary in the early exchanges, Varun came away with fine powerplay figures of 2-0-7-0. Ashwin, the original spin-bowling powerplay specialist, however, had a sketchy start, with Munsey hitting him for three fours in a row.

Once the powerplay ended, Jadeja entered the attack and showed how dangerous he could be on such pitches in his very first over. His first ball to Richie Berrtington slid in with the angle from around the wicket. The batter was preparing to cover the angle, but Jadeja found sharp turn to nail the middle stump. Three balls later, Jadeja got one to skid and zip off the pitch from a fairly similar spot, thumping Matthew Cross’ back pad. Cross asked for a review, but when Jadeja is in control there is only one possible result and that is the ball heading towards the stumps.

Jadeja’s double-strike set the scene for Ashwin’s return to the attack. Calum MacLeod and Michael Leask are not left-handers, so Ashwin brought out all his trickery. After hiding a carrom ball away from McLeod’s swinging arc, he unfurled the reverse carrom ball, which is fairly comparable to an inswinger to a right-hander. The batter didn’t pick it, and plopped an outside edge to the cover-point region.

On Wednesday, it was Afghanistan’s Gulbadin Naib who didn’t pick Ashwin’s reverse carrom-ball and was trapped lbw after missing the sweep. The reverse carrom variation, with the seam pointed the other way, has given Ashwin a genuine wicket-taking option against the right-handers in particular.

Sign up for ESPN+ and catch all the action from the Men’s T20 World Cup live in the USA. Match highlights of India vs Scotland is available in English, and in Hindi (USA only).

“I am really surprised that in the last [2019] IPL people could not pick up what I was bowling,” Ashwin told Sanjay Manjrekar on ESPNcricinfo’s videocast in 2020. “A lot of people thought I was bowling the carrom ball but actually I was bowling reverse carrom because when I would bowl that I would get a lot out of the pitch. Sometimes it can spin, sometimes I could get it to skid and sometimes duck back in.”

The one to Naib seemed to skid on, while the other to MacLeod swerved back in. On Friday, Ashwin also bowled some floaters, one of which had Chris Greaves holing out. Ashwin could have had another wicket had Rishabh Pant gathered his slider cleanly and effected a stumping that could’ve cut short Mark Watt’s innings.

With combined figures of 11-0-59-4, Jadeja, Varun and Ashwin set in motion Scotland’s terminal collapse and gave India’s net run rate a nitro boost. The trio’s shift still might not be enough for India to qualify for the semi-finals – if New Zealand beat Afghanistan on Sunday in Abu Dhabi, India will be knocked out along with Afghanistan.

At the post-match press conference, Jadeja even quipped: “Toh fir bags pack karke ghar jaayenge, aur kya?” [Pack the bags and go home, what else?], if New Zealand win on Sunday. While India’s fate isn’t in their hands at this World Cup, there is a bit of magic in the fingers and wrists of Jadeja, Ashwin and Varun.