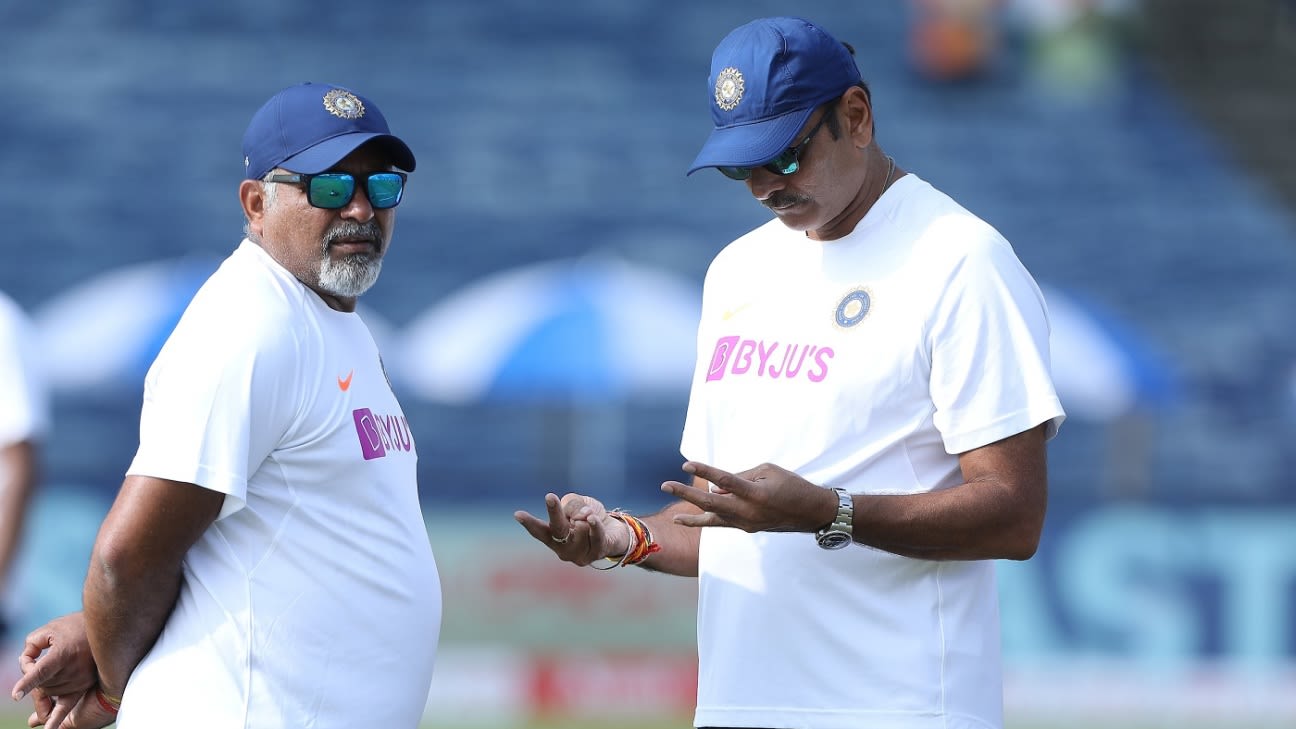 India’s outgoing bowling coach looks back at his stint

Bharat Arun is set to bow out as India’s bowling coach when the team’s T20 World Cup campaign ends on Monday, and he reckons India’s success in overseas Tests over the last two years has been the highlight of his work with the team. The end of Arun’s tenure marks the end of one of Indian cricket’s most successful projects – beginning during Ravi Shastri‘s second stint as India’s head coach in August 2017 – which helped elevate India’s fast-bowling talent to a consistently world-class level in Tests.
Through a diligent workload-management system and through innovative bowling plans, among them the “leg trap” employed against Australia earlier this year, India’s fast bowlers became the bedrock of famous victories overseas apart from having a significant impact even at home.

“There have been ups and downs but I think the team is in a much better position than when we started. Pretty happy about it,” Arun said before India’s last match at the T20 World Cup. “The highest point of the career would be the kind of bowling that we have – we set about winning a lot of Tests overseas. That is what we strived hard to achieve as a team and we went about achieving that.

“I think the highest point would be the two back-to-back wins in Australia and also us, more or less, winning the series in England. Of course, there’s one more Test to go, but I think the performance of the team during this English series was outstanding.”

Arun’s playing career ended when he was 29, and his foray into coaching came with a determination to understand the science and biomechanics of bowling, and to not propagate the “myths we were handed down through generations”. The increased fitness of India’s fast bowlers during his time, and the presence of a solid second string in the main bowlers’ absence speak to that.

“All of us came together and said we have enough fast bowlers, but we need to create a lot more discipline in their attack and also to make sure they remain fresh throughout,” he explained. “That is the only chance of us winning. And also the team management and captain took a very bold step of always playing five bowlers at any given point of time.

“We can afford to field different teams for different formats. That way it’s not only we understanding the different talent that is available, but it also keeps our bowlers mentally and physically very fresh”

“Earlier we went in with only four bowlers and somebody who can also bowl. But right now we are going with five regular bowlers in any team that we have. So I think that is a first fearless step. Because we said that the batting group needs to step up, we need to take added responsibility if we need to win matches abroad, and we need to take 20 wickets all the time. So that went into us playing this combination of at least five bowlers in every match. The wicketkeeper being a very good batter also helps the cause.”

India have pushed a number of bowlers up to the senior team, particularly over the last ten months or so. The likes of Mohammed Siraj, Shardul Thakur, Axar Patel and Washington Sundar have all stepped in with varying degrees of success as backups for the core of Jasprit Bumrah, Ishant Sharma, Mohammed Shami, Umesh Yadav and the two frontline spinners, R Ashwin and Ravindra Jadeja. Arun mentioned Prasidh Krishna as one that sparks confidence as well, and said India’s next generation was in good shape.

With the volume of cricket ever increasing, however, he hinted that it was time for India to use their reserves to make sure everyone continued to stay “fresh”, even if it meant playing different bowlers across formats.

“Not only the volume of cricket that our country is playing but also remaining in the bubble and playing – I can guarantee that it’s not easy to be in the bubble and keep playing throughout the year,” he said. “They do need some breaks because I think even the mental health is going to be very important going forward. This is going to be the norm for us, at least for the next one year or two years. So it is important.

“In our country we have a very good pool of fast bowlers, there is enough talent in our country. So we can afford to field different teams for different formats. That way it’s not only we understanding the different talent that is available, but it also keeps our bowlers mentally and physically very fresh.”