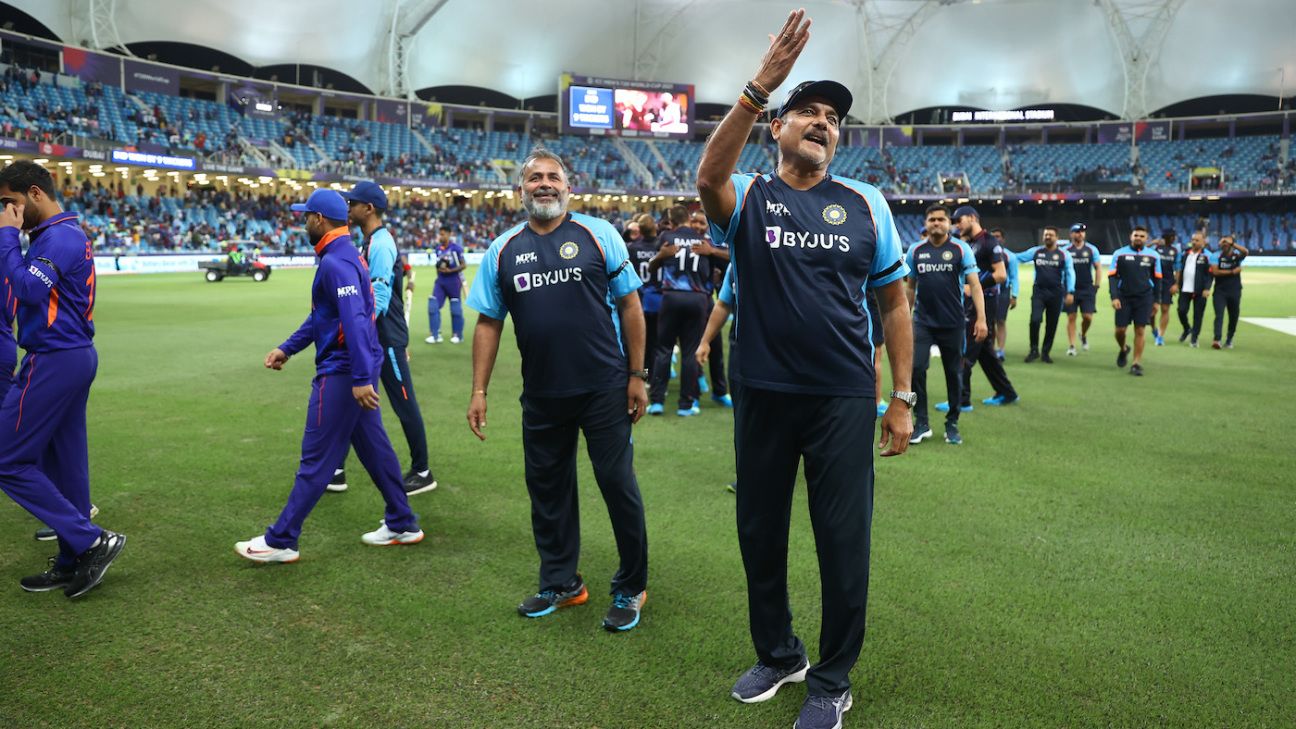 Ravi Shastri signed off from his four-and-a-half-year tenure as India’s men’s head coach as an “emotional, but a very proud man”, labelling his side “one of the great cricket teams in the history of the game” and underlining the toll that non-stop touring in biosecure conditions had taken on him and his players.

Since his appointment in 2017 and the extension of his contract two years later, Shastri has overseen back-to-back Test series wins in Australia and his side will return to England with a 2-1 lead in July 2022. They have enjoyed sustained success in bilateral white-ball cricket but their stretch without winning an ICC event extended to eight years after exits at the semi-final and Super 12s stages of the 50-over World Cup in 2019 and the T20 World Cup in 2021 respectively.

“The quality of cricket this team has played over the last five years across all formats, the performances are there for everyone to see,” Shastri said in his press conference. “When you perform in that fashion, when you go across the globe, across all formats and beat teams, then you know you’re part of one great cricket team.

“I’m not saying a great cricket team, India – I’m saying one of the great cricket teams in the history of the game, because if you look at those kind of performances, they don’t happen often. You’ve got to have a bunch of players who are fit, hungry, fearless, have the quality, have the belief, and then to stay fit so that you can play those five years together and go across the globe and perform everywhere.

“If you want the real highlights, nothing beats Australia, England, we’re up in the series, it’ll be longest time will be up in the series till next year [sic]. I might be commentating on that game, for all you know, but I’ll keep that one. It feels good. But white-ball, everywhere: we beat West Indies in the West Indies, we’ve beaten Sri Lanka in Sri Lanka – good teams. All round, it’s been fabulous.”

India were eliminated at the Super 12s stage of this World Cup after back-to-back defeats in Dubai in their first two games against Pakistan and New Zealand. While Shastri admitted that they “lacked daring”, he suggested that the result of the toss had been crucial throughout their campaign, and said that he wished players had been afforded a longer break between the end of the IPL and the start of the tournament.

“We are disappointed with the result in the first two games here,” he said. “I’m not here to make any sort of excuses. We lacked the daring in the second game against New Zealand. I know the toss was important and as you’ve seen in the last three games how important it is, and I do feel it’ll continue to be important – though not as much now as the weather has cooled down a bit, but still. It’s something for the boys to learn and they’ll get an opportunity again next year. It’s not often you have [two] World Cups in 12 months, so hopefully, they’ll go and kick some butt there.

“The cricket itinerary is so packed that you can do only one thing at a time. At least they played some T20 cricket in the IPL – I just wish that the gap was a little more. That’s not my job, it was already done. That’s something I’m sure the administrators, not just from India [or] from BCCI, but from others around the globe who will also be looking at it – before big tournaments, to ensure that there is a little bit of a gap so that the guys are mentally fresh and ready to play.”

India’s multi-format players have been in biosecure environments since their arrival in England in June ahead of the World Test Championship final, and Shastri said that while a culture of “trust” meant that players would be free to take breaks from the game when they needed to, it was vital to remember that they are “human”.

“We actively worked towards it: we wanted trust in that dressing room,” he said. “That’s the only way you can get each other’s backs. We needed communication, we needed no finger-pointing at each other, we needed the word ‘I’ to be thrown into the dustbin, and the word ‘we’ coming in. We created a culture that had to be obeyed and followed with Virat [Kohli] leading the way.

“One thing I would say – this is not an excuse, this is a fact – when you’re six months in a bubble, there are a lot of players in this team who played all three formats of the game. I don’t care who you are, if your name is Bradman, if you’re in a bubble as well, your average will come down, because you’re human. This is not something where you just put petrol in the backside and then expect the guy to move on in overdrive. It doesn’t happen that way. They’ve shown the drive to hang in there, no complaints, but sooner or later, the bubble will burst so you’ve got to be careful.

“It’s one of the great sides to have played cricket at the highest level in the history of the game when you look all round. Let’s not take anything away from that. For me, to be part of that journey with the boys and for the boys to respond and raise the bar in that fashion leaves you going from the dressing room emotional, but a very proud man.”