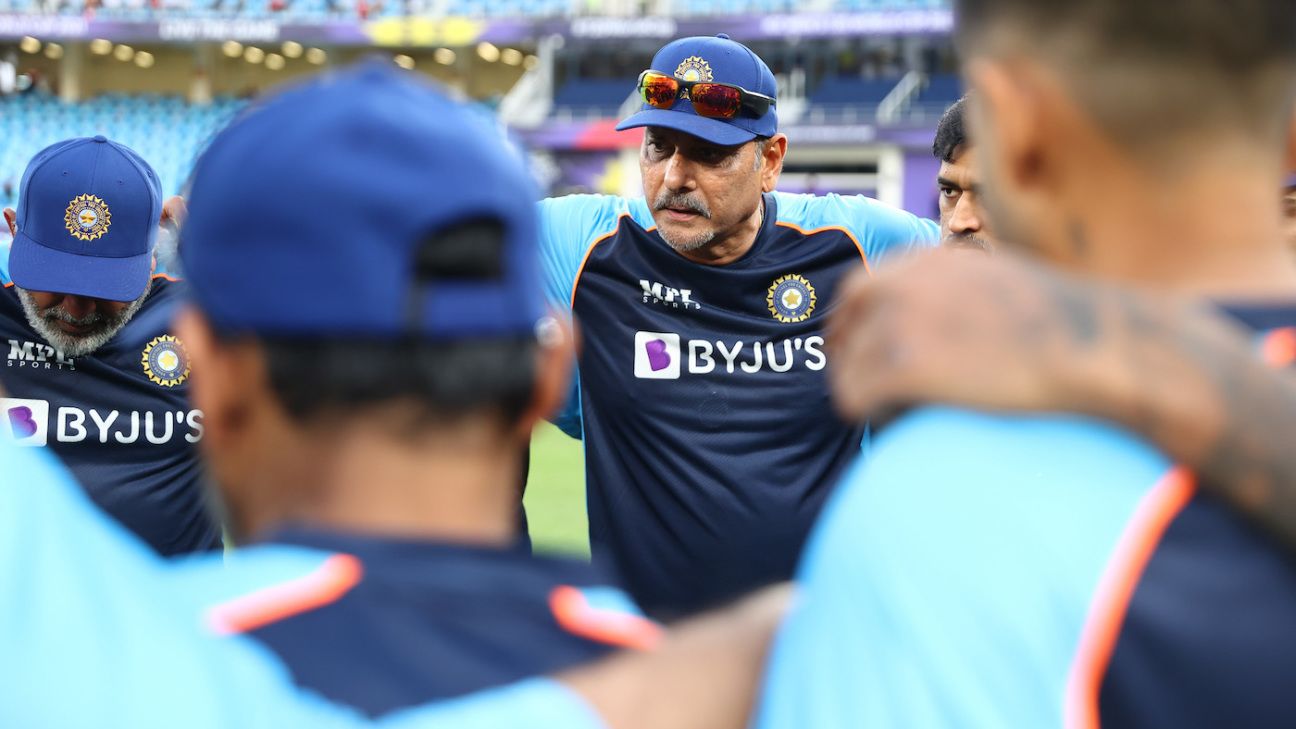 “It’s unfortunate we are out of this tournament but that takes nothing away from this great side.”

For the first time since 2012, India will bow out of an ICC tournament before the semi-final stage. White-ball cricket aside, India have also managed sustained success in Tests, with back-to-back series wins in Australia and a 2-1 lead in England establishing their credentials as a side that can perform in all conditions. On his last day as head coach, Ravi Shastri reflected on these achievements as he tried to put their early exit from the T20 World Cup in perspective.

“When I took this job, I said in my mind, I want to make a difference and I think I have,” he told Star Sports ahead of the final Super 12s match between India and Namibia on Monday. “Sometimes in life it’s not about what you accomplish. It’s what you overcome. And what these guys have overcome over the last five years, the way they have travelled across the globe and performed in every corner of the globe in all formats of the game will make this, irrespective of what’s happened here, as one of the great teams in the history of the game. I’ve absolutely no doubt in my mind. It’s unfortunate we are out of this tournament but that takes nothing away from this great side.”

Shastri took over as India coach for a second time in July 2017 and had focused on building a team that can win away from home.

“Across all formats there are plenty [of gains],” he said. “But I would say winning in red-ball cricket across the globe – in West Indies, Sri Lanka, Australia, England, we’re leading the series, it could be the longest lead in the history of cricket because the next Test is next year but I’ll take that. I’ll settle for that for 12 months. But to go across and beat all these sides and then every team in white-ball cricket, whether it’s Twenty20 or fifty-over, we’ve beaten sides in their den which was my endeavour and the team’s endeavour because you were always big bullies at home but when you had to travel outside you didn’t have the goods. But this team has shown they have more.”

“Because there’s still a lot of players here who will play for another three-four years which is important,” he said. “It’s not a team in transition overnight and that will make the biggest difference. Virat’s still there. He’s done a fantastic job as leader of the side. In fact he has been one of the biggest and best ambassadors in Test match cricket over the last five years and a lot of credit goes to him for the way he’s thought about how we want to play the game and how the team’s rallied around him.”

India had come into the T20 World Cup as one of the favourites but they couldn’t perform to potential thanks to a series of factors, among which was player fatigue.

“I am mentally drained but I expect that at my age,” Shastri said. “These guys are physically and mentally drained. Six months in a bubble. What we would have ideally liked was a bigger gap between the IPL and the World Cup. So it’s when the big games come, when the pressure hits you, you are not as switched on as you should be. That’s not an excuse. We’ll take defeat because we are not scared of losing. Because in trying to win, you will lose a game. Here we didn’t try to win because that X-factor was missing.”