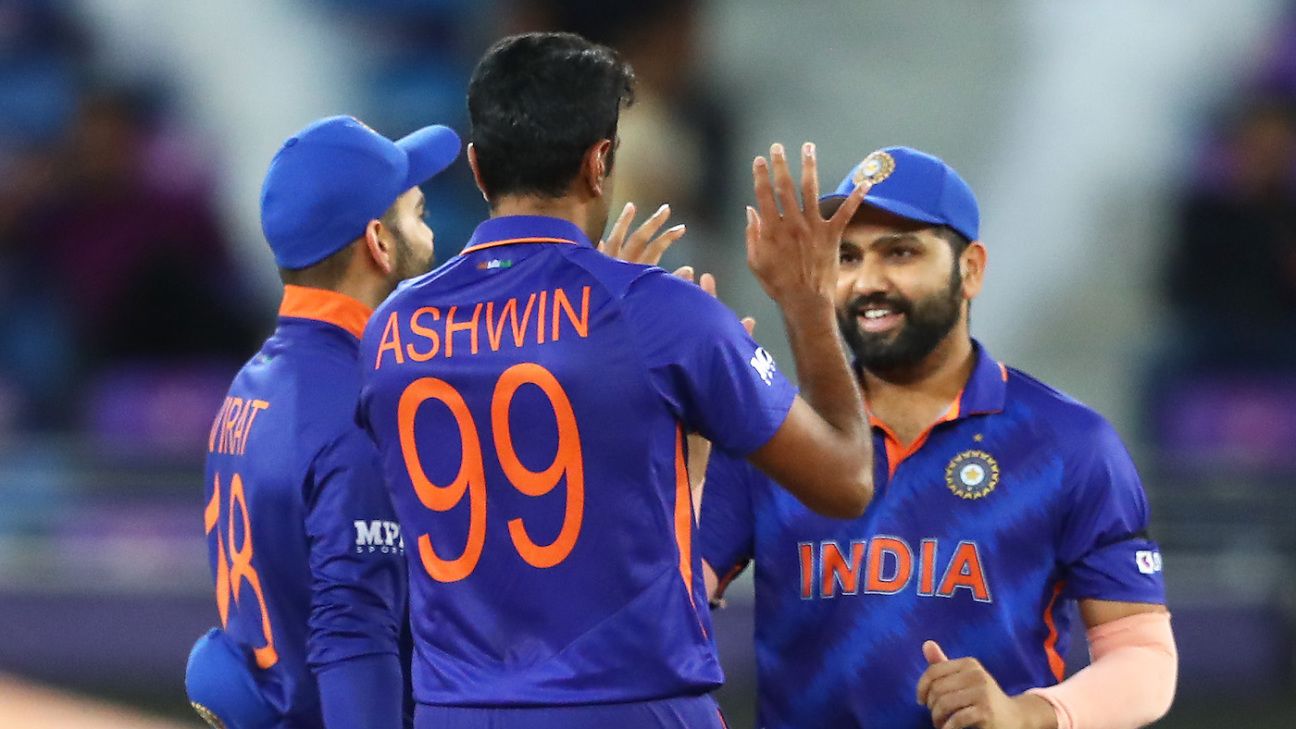 India signed off from the T20 World Cup on a winning note after restricting Namibia to 132. It is not easy to be up for such dead rubbers after you have been knocked out of the competition, but intensity has hardly been an issue for Virat Kohli, who was captaining in his last T20I. The man Kohli hinted at as his successor, Rohit Sharma sealed the chase with 56 off 37 after Ravindra Jadeja and R Ashwin took three wickets each.

Namibia’s innings goes nowhere
Usually T20 innings have ebbs and flows, turns and bends. A big over or a maiden to turn things around. Punctuations. This one was just one long sentence of no pace. From the moment Jasprit Bumrah got Michael van Lingen caught at mid-off with a bouncer, wickets fell regularly but not too quickly and runs came regularly but not too quickly.

Test spinners take threes
Jadeja and Ashwin then owned the middle overs with three wickets each even as Rahul Chahar went for 30 for 0 in his only match of the tournament. Jadeja had Craig Williams stumped, Stephan Baard lbw and JJ Smith caught at cover. Ashwin used changes of pace and direction of turn to claim his three victims, Jan Loftie-Eaton edging a slow offbreak to slip, Gerhard Erasmus edging a carrom ball and Zane green bowled middle stump off a really slow, drifting offbreak.

Wiese, Trumplemann get something to bowl at
David Wiese top-scored with 26 off 25 to make sure Namibia were not bowled out, and the No. 10 Ruben Trumplemann hit a six and a four off the last over, bowled by Mohammed Shami, to take Namibia to 132.

Rohit enjoys early luck
There is a misconception around that Rohit has some weakness against left-arm pace, and he nearly added to it in the first over of the chase. He played for swing first up, but the ball didn’t come back in as much as expected, beating him on the outside edge. The next one he tucked off the hip straight to short fine leg, but was dropped. In the third over again, he lobbed one to midwicket, but Smit misjudged the catch and went on his knees too early and was unable to take the couple of steps needed to take the catch.

Rohit shows off stroke-play
Lofts down the ground, pick-ups off the hips, square cut, pull, crashing legspin over mid-off, Rohit then unfurled the goods to make sure India were well on their way to victory. By the time he skied a slower ball from Jan Frylink, India had reached 86 in the 10th over. Kohli didn’t come out to bat, promoting Suryakumar Yadav, who, in company with KL Rahul, saw India through. Rahul ended with another fifty, and India with another win, albeit a hollow one.