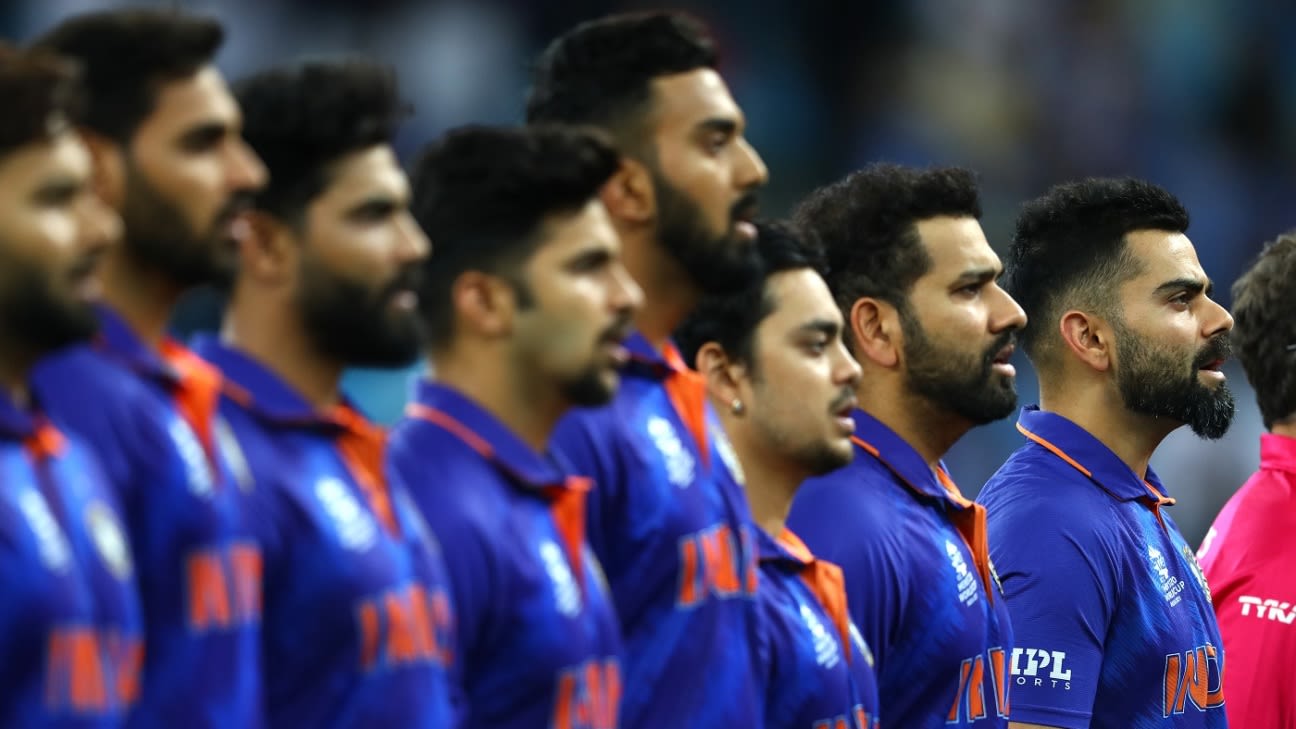 Instilling “confidence” and “faith” in players and taking care of their’ “physical and mental well-being” in the wake of a packed schedule in relentless bio-bubbles are among the main objectives of India’s new T20I captain Rohit Sharma and head coach Rahul Dravid.

Rohit takes over captaincy from Virat Kohli after India’s exit in the group stage of the recent T20 World Cup, with the next edition coming up in less than a year’s time. Rohit said he and Dravid will work on defining each and every player’s role and give them the security to play “fearlessly” because T20 demands you to take a lot of risks and not all of them come off.

“It’s one of the important aspects of the format where people have assurance of taking chances in the middle,” Rohit said seated next to Dravid for a Zoom press conference ahead of the T20I opener against New Zealand starting on Wednesday in Jaipur. “If it comes off, it comes off, if it doesn’t, then what happens. That’s where both of us will need to play a huge role and part in giving an individual that assurance of going out and expressing himself.

“It’s important, especially in this format, that sometimes you just need to go out there and play fearlessly and while doing that, there are chances that you might not always be successful because it’s a short format and you’re always challenged. The pressure is always there. We certainly will keep an eye on that aspect; that’s where the entire set-up will play a big part that wherever that individual bats, and how we want him to bat, goes and does the job for us. If he doesn’t then we instill confidence in him that we have full faith in you, just go and do the role for the team. As long as they’re trying to do the role for the team, we are happy.”

Dravid, on the other hand, will oversee players and teams across formats as India prepare for both the 2023 ODI World Cup at home and the latest cycle of the World Test Championship. Workload management has come into particular focus for the New Zealand side, who finished runners-up in the World Cup on Sunday in Dubai and landed in Jaipur less than 24 hours later for a three-match T20I series to be followed by a two-Test series. Dravid said workload management is now the need of the hour but ruled out playing different teams in different formats.

“Workload management has become a crucial part of the game now because so much cricket is played these days,” Dravid said. “Like we see in football also, seasons are so long and some of the top players don’t play all the games. So if we’re playing throughout the year then we have to be careful about players’ workload management. Whether we do it within the team or by giving them a break, that will depend on a case-by-case basis. But like I’ve said before, players’ mental and physical well-being will be most important, we will work in and around that, the team will also take priority. So it’s a balancing act and we need to understand that we need to do this balancing act at a time like this and work towards getting everyone fit and ready for the big tournament.

“I don’t think we’re at that point where we’re looking at separate teams [for separate formats]. Of course, there are certain individuals who only play particular formats and there are some who play all formats. Obviously, in times like this we need to be in a conversation with the players, for me the players’ physical and mental health is the most important thing. I will always be in conversation with them and I’d like to work with them to ensure that whenever they’re playing, we have them fully switched on and we need to recognise that these are challenging times for people, for players, and especially for those guys who are expected to play all formats. We might not be able to play every single player in every single game across formats, we need to accept that as reality. Herein lies the opportunity for the other guys to step up and use it show what they have.”

Rahul Dravid: Rohit’s growth as leader and person has been ‘phenomenal’

With the next T20 World Cup already on the horizon, Rohit said India are work shopping through several templates to find the one that best fits them. The five-time IPL winning captain also admitted that the team had certain holes to fill and said it could be done by buying into the concept of role clarity.

“Template is a very important one and we need to set it right,” Rohit said. “We’ve got some time to do that. India has been brilliant in this format, it’s just that we haven’t won the ICC tournament. We’ve played well and performed well as a team. Of course, there are little holes we need to fill and make sure they’re looked after. That will be the biggest challenge we’ll have as a team.

“There are holes in every team but you try and maximise what you have. I’m not going to say that we’re going to follow a certain team’s template. We have to create our own template, see what’s best and right for tour team.

“It’s important because when you compare it with Syed Mushtaq Ali or IPL, they’ve played differently in their franchise teams or Syed Mushtaq Ali. And when they come here they play a different tole. We strictly want to assign roles that we want them to do because at the end of the day what they do here matters. It can take a while or it can happen in a few games as well. To give them that long rope or confidence is important to perform their role to perfection. We’re starting afresh after the World Cup and we’ve set some ideas and thoughts for this series now. Let’s see how that pans out and we’ll take it from there.”

Vishal Dikshit is an assistant editor at ESPNcricinfo