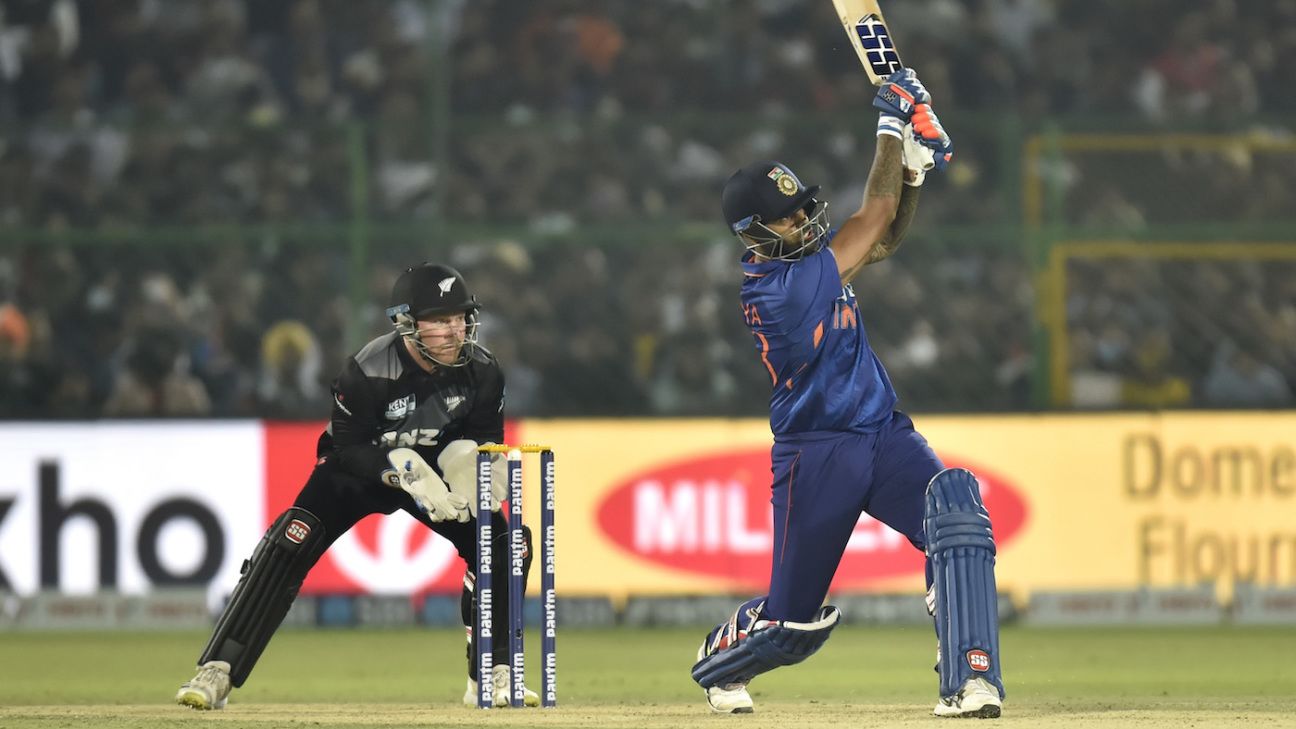 It was only last Sunday that New Zealand lost to Australia in the final of the T20 World Cup but so jam-packed is the international calendar at the moment that only five days later, they will be fighting to prevent a series defeat against India in Ranchi. To make things worse, they don’t start as the favourites.
In the absence of Kane Williamson, Mark Chapman stepped up with the bat in the first T20I, but Rachin Ravindra and Todd Astle failed to impress. Ravindra was out for 7 off eight balls and didn’t bowl, while Astle leaked 34 from three overs. New Zealand will know they need a complete team performance to level the series.
India, on the other hand, began the Rahul Dravid–Rohit Sharma era with a perfect result but their performance was far from perfect. After opting to bowl, they allowed New Zealand to cruise to 106 for 1 in 13 overs. While chasing, they needed 23 from 24 balls with eight wickets in hand but let the game drift before sealing it in the final over.
Still, there were a lot of positives for the hosts. Bhuvneshwar Kumar found swing with the new ball and, bowling two overs at the start and two at the death, returned figures of 2 for 24. Suryakumar Yadav continued batting in an uninhibited manner and picked up the Player-of-the-Match award, while Rohit, too, batted freely. India, though, would want more from their middle order.

Rishabh Pant‘s reputation is of a destructive middle-order batter. But in 2021, he has struck at a middling 124.68 in eight T20I innings. Surprisingly, that is still higher than his overall strike rate (122.62) in the format. With Suryakumar all but cementing his slot, KL Rahul available as an alternative wicketkeeper and Ishan Kishan also being in the squad, Pant’s performances will be under scrutiny.

It’s difficult to see India making any significant changes to their XI. They could consider bringing in Yuzvendra Chahal for Axar Patel but given they are playing only with six batters, that would further weaken their lower-order batting.

With the series on the line, New Zealand could bring in James Neesham and Ish Sodhi but at the same time, it won’t be a surprise if they want to give Ravindra and Astle another opportunity.

Ranchi has hosted only two T20Is till date, and one of them was a rain-affected contest. That means there is hardly any data to look into. With dew expected to play a major role, the teams may stick to the win-the-toss-and-chase strategy. The forecast for Friday evening is partly cloudy, with the temperature hovering around 17 degrees Celsius.

“Trent Boult…we’ve played a lot of cricket together. He knows my weakness and I know his strength, so yeah, it’s a good fight between the two. I knew [about him bringing fine leg up]. I mean, when I’m captaining him, I always tell him to bluff, and that’s exactly what he did. He put the midwicket back and got the fine leg up, but I knew he was going to bowl a bouncer. I was just trying to put it over his head, there was not much pace on the ball. Unfortunately, got out but yeah, happy with the win.”
Rohit Sharma reflects on his dismissal to Mumbai Indians team-mate Trent Boult

“It would have been nice to have added 10-15 runs more but fighting right to the end is something we pride ourselves on in this Black Caps team. Pretty proud of how the guys went and pushed it to the last over.”
Mark Chapman after the first T20I