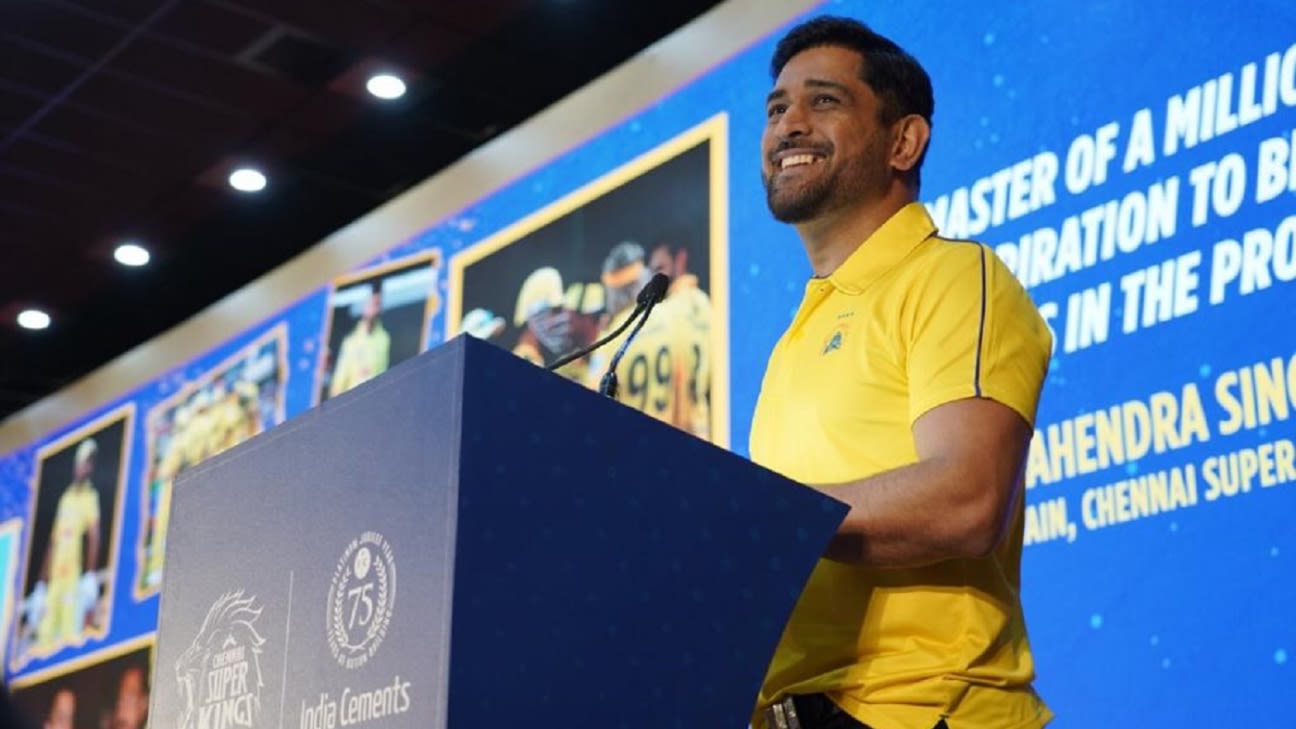 ‘Whether it’s next year or in five years’ time, I don’t know’ says CSK captain

MS Dhoni has indicated that he would continue playing for Chennai Super Kings in the IPL – for at least one more season – as he hopes for a Chepauk farewell.
Earlier, following Super Kings’ win in the IPL 2021 final against Kolkata Knight Riders, Dhoni had said any decision about his retirement would be taken keeping in mind the needs of the franchise. With the mega auction coming up, and with teams allowed to retain only four players, his future seemed uncertain although Super Kings boss N Srinivasan had hinted that he will stay on with the franchise in some capacity.

“I have always planned my cricket,” Dhoni said at an event hosted by the Super Kings. “The last ODI that I played in India was in Ranchi. Hopefully my last T20 will be in Chennai. Whether it’s next year or in five years’ time, I don’t know.”

Dhoni has led the Super Kings right from the first season in 2008, taking them to four titles. They have made the playoffs in every IPL they had been a part of, barring 2020. Over time, Dhoni has not only become integral to the Super Kings brand but the city of Chennai itself.

“The association started in 2008 when it comes to IPL, but it started before that when it came to play some of the other formats,” Dhoni said. “One of the most memorable being my Test debut, you know, which happened is in Chennai. I think I never knew that I’ll be picked by CSK, I was in the auction and I got picked and it gave me an opportunity to understand the culture, which was very different from where I actually came from.

“And what made it even more different was I’m like a wanderer. My parents came from Uttar Pradesh. It was initially UP, then it became Uttarakhand. I was born in Ranchi which was Bihar. Then later on became Jharkhand. I got my job at the age of 18, with railways in West Bengal, you know, Kharagpur and then I came to Chennai and I believe Chennai taught me a lot. Tamil Nadu taught me a lot when it came to how to conduct myself, how to appreciate the game. Each and every game that we played at Chepauk the fans came and supported good cricket.”

Super Kings came into the 2021 IPL on the back of a poor run in 2020 and with an ageing squad as well. But they went on to win nine of the 14 league games to finish second on the table, then beat table-toppers Delhi Capitals in Qualifier 1 to reach the final, and eventually toppled Knight Riders in convincing fashion to claim the title. Dhoni said that the franchise and fans’ backing gave the players the confidence to bounce back in the way they did.

“We had a very good run when it came to franchise cricket but it became interesting in 2020. That was the first season where we didn’t qualify to the next stage of IPL. It gave us a chance to test the real character of the franchise, because when the going is good, you always keep talking about what you do, what is the process that you follow, but it gave us an opportunity to earn the respect of the players and the fans, you know, because we said we believe in the process, we don’t believe in the result.

“And the result definitely didn’t go in our favour in 2020 and I feel we earned the respect of the men because they said this is what they do. They walk the talk and that’s one of the main reasons why I believe we could come back strongly and we were able to win that title.”

Dhoni has been asked about his future at Super Kings a number of times during the course of the last two seasons. And this time, Srinivasan also had an answer for it, explaining what Dhoni means to the franchise and to the players who have played under him.

“People keep bugging him, ‘are you going to continue?’ He is there, he hasn’t gone anywhere,” Srinivasan said. “He is still there. That’s why when somebody said ‘what about your legacy?’ he said ‘I’ve not gone.’

“So many international captains have played under him. If you look at CSK, we have had a star-studded side. We also have people who aren’t superstars. He has managed superstars and other players too. It is universally acknowledged that any player will give his best, better than his best, under MS Dhoni.

“The problem now with the management of CSK is how to get the whole gang back. Because one of the reasons for success of CSK has been consistency and also at all times we have shown faith to our players. We don’t like to leave any player.”

Srinivasan also spoke about the only time he saw “captain cool” get emotional, which was following Super Kings’ return from a two-year ban in 2018 – a year when they won their third title.

“He is really captain cool. But only once [he has not been]. We came back from banishment [in 2018]. Every year at the start of the season, I have a small interaction [with the team]. That year we had just come back. So, I welcomed the team I was slightly emotional. We had come back after two years and we had expectations of the year. The first time in my life I saw our captain also being emotional. It was a private function and I can’t exhibit it. But what he said is that we have to win.

“The journey of the generation booking is a journey of faith. It’s a journey of leadership. I don’t think anybody else could have managed the difficult periods that we went through as he has. He never showed it on the field whether we win or lose and that is the hallmark of a champion.”