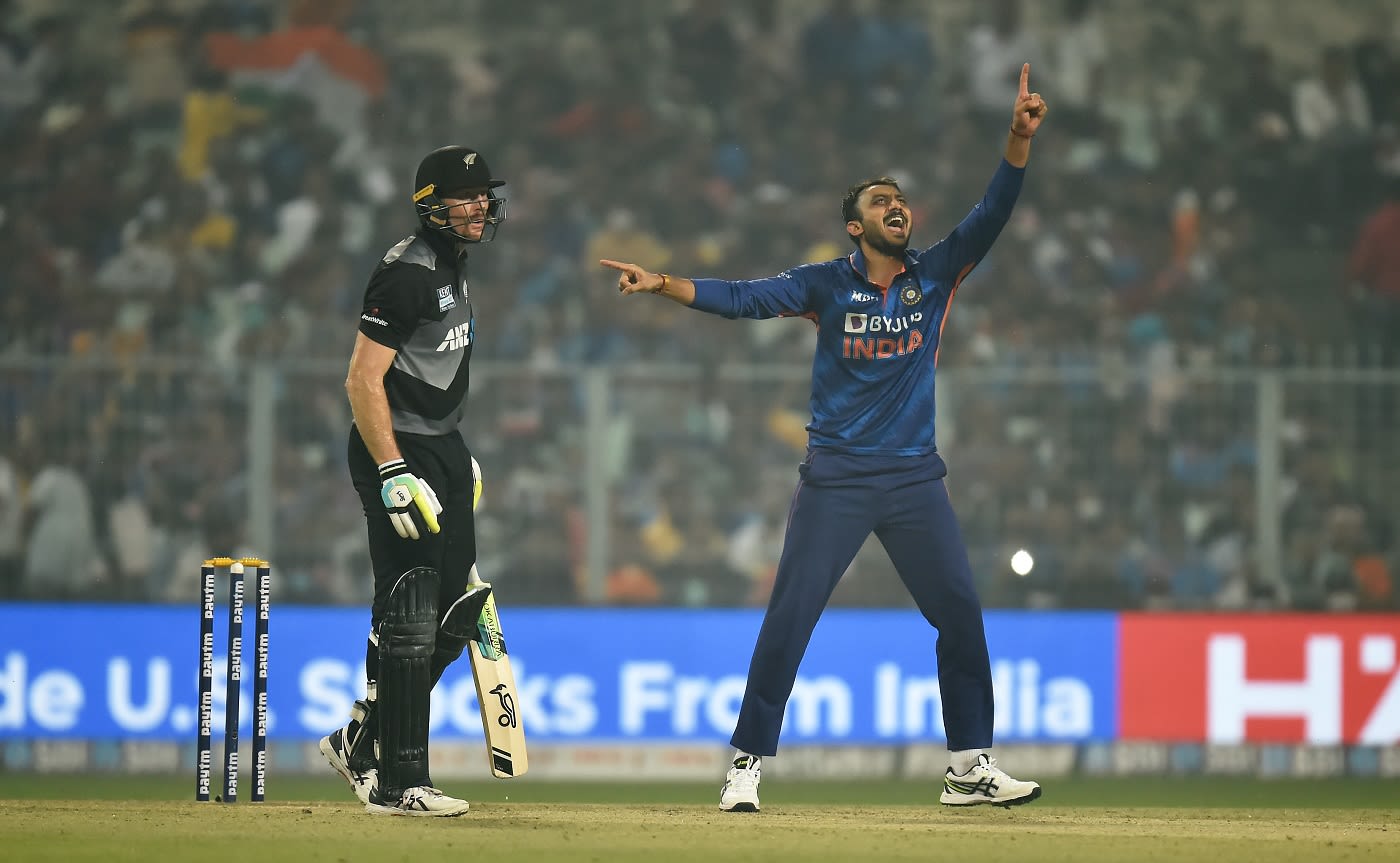 New Zealand, at no stage, showed any semblance of a fight. Not even when Guptill shellacked a breezy half-century.

India won the toss, opted to bat to challenge themselves against dewy conditions later, and ended up defending quite comfortably. They also ticked a fair few boxes along the way.

Sign up for ESPN+ and catch all the action from India vs New Zealand live in the US. Match highlights of the third T20I is available here in English, and here in Hindi (US only).

India swept the series 3-0, New Zealand at no stage showing any semblance of a fight. Not even when Guptill shellacked a breezy half-century.

Players who generally plot and plan together were up against each other. Rohit Sharma and Kishan, coming in for the rested KL Rahul, as openers. Trent Boult and Adam Milne as new-ball bowlers. And it was India who set the tone for dominance early on as the top two got them off the blocks briskly, with a pair of fours each in the first few overs.

Rohit’s trademark pull and Kishan’s Jayasuriya-esque whip off his pads made an appearance. It was clear that India were mindful of heavy dew and wanted to set the tempo and sustain it through the innings. Lockie Ferguson, coming in for stand-in captain Tim Southee, struggled for rhythm – landing full tosses and short balls aplenty to concede 30 off his first 12 balls as India raced to 69 for 0 in six overs.

Santner puts the brakes on

Mitchell Santner brought himself on before dew took effect and trapped Kishan two balls later when he beat the batter with the skid off the pitch to have him caught for 29. In walked Suryakumar Yadav, another true-blue Mumbai Indian, but he didn’t last long either, driving one uppishly to cover to give Santner a second wicket in the over. One quiet Ish Sodhi set later, Santner had a third when he made Pant miscue a slog sweep to mid-on. New Zealand had landed a counter-punch. India went without any boundaries between overs 6 and 10. The slowdown was well and truly on.

The Iyers get going, before Harshal-Chahar finish strongly

Rohit fell for a 28-ball 55, after toe-ending a drive back to Sodhi, but Venkatesh and Shreyas set about the rebuild by milking the singles. From overs 11.3 to 13.4 when Venkatesh broke the shackles by muscling a slog sweep over deep midwicket, the pair played out a lone dot ball.

Venkatesh showed excellent footwork in getting to the pitch of the ball and hitting towards the short straight boundaries, while Shreyas picked off a bulk of his runs through cuts and dabs behind square. The pair had added 36 before they fell in the space of three deliveries.

Venkatesh went first for 20 when he dragged a Trent Boult knuckleball to deep midwicket. Shreyas fell trying to clear long-on with Daryl Mitchell covering good ground and sliding to complete the catch. At that point, ESPNcricinfo’s Forecaster pegged India to get 172.

That they got much 12 more was courtesy their batting depth. Harshal, who opens for his state side Haryana in T20s, and Deepak Chahar contributed 39 between them to force a strong finish. It included India getting 19 off the final over bowled by Ferguson, who went for 45 off his four overs.

A huge machine-mop took off as much dew as it could in the break, but it was only going to be a matter of time before it’d set in again to make it difficult for the spinners to grip the ball.

Perhaps mindful of this, Rohit introduced Axar in the third over, and the move worked as he struck twice to stun the visitors upfront. Mitchell picked out extra cover and Mark Chapman ran down the pitch, only to be beaten by sharp turn on the inside edge to see Pant pull off a terrific stumping.

Chahal came on from the other end and came in for some tap from the marauding Guptill, who batted with ferocity. Tossing the ball into his hitting arc, Chahal kept getting pinged between long-on and deep midwicket, but Axar at the other end wasn’t quite so obliging. Glenn Phillips became the left-armer’s third victim when he was bowled attempting a reverse sweep off a full delivery. At that stage, New Zealand were tottering at 30 for 3 in five overs.

With the top order blown away, and only Guptill standing in their way, Rohit took the opportunity to get a few overs out of Venkatesh and the medium pacer used his height and clever variation of lengths to keep batters honest. Harshal was equally hard to hit with his bouquet of slower balls tying New Zealand down.

Chahal then returned after two expensive overs with a change in plan. After he went middle and leg only to be swung away, he corrected his line and tried to get batters hit against the turn, and it immediately worked as Guptill holed out to long-on after a quick fire half-century. At 70 for 4 in the 11th over, it was one-way traffic. Batter after batter came out swinging and missing and slipping and sliding as a hungry Indian bowling unit closed out the game clinically.