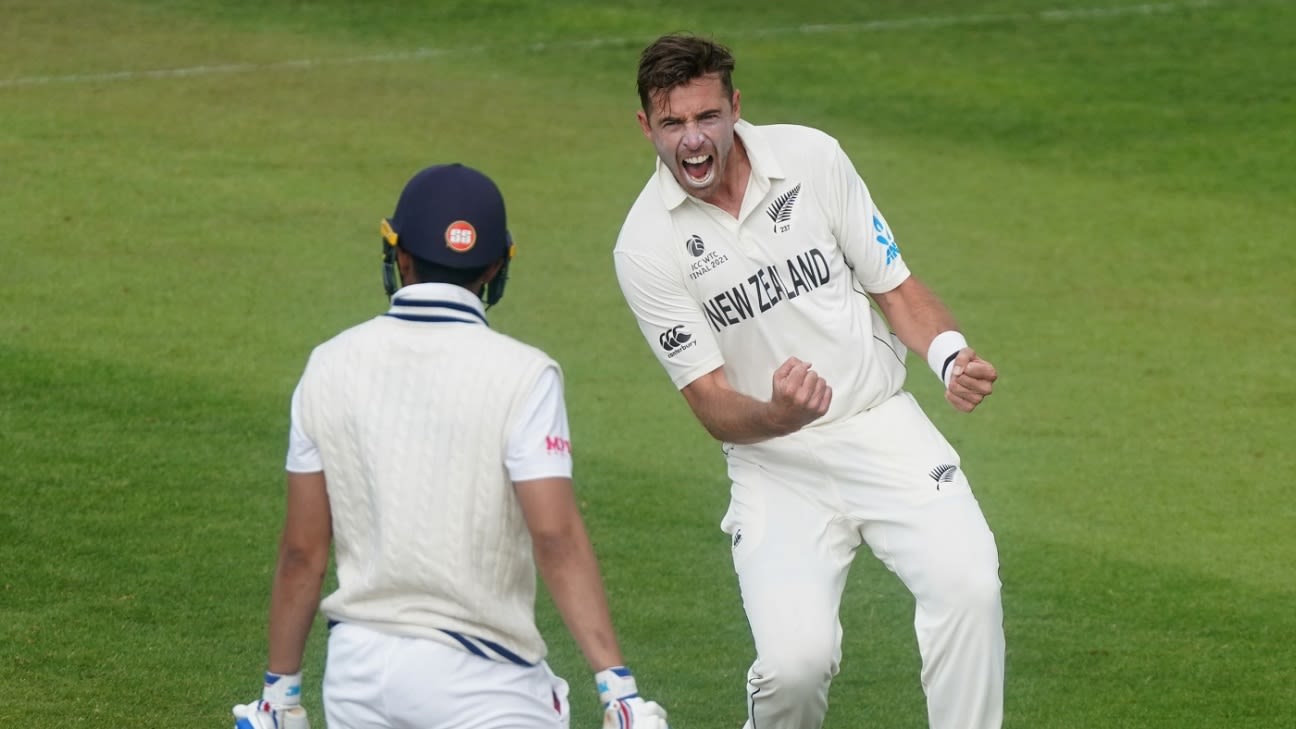 This should be one of the most eagerly anticipated series of recent times, but just look at who won’t be lining up in Kanpur even though they’re fully fit: Kohli, Rohit, Pant, Bumrah, Shami, Boult, de Grandhomme. It’s the reality of these times. There’s endless, wall-to-wall cricket, most of it within biosecure bubbles, and, at some point, everyone needs a break.

It won’t have the star power it might otherwise command, but this still promises to be an enthralling series. After an England tour during which India’s XI mostly had room only for one of them, R Ashwin and Ravindra Jadeja will be back doing what they do best, and their threat is likely to be magnified by the presence of Axar Patel in a three-man spin attack.
The challenge that this India attack – the aforementioned spinners plus their quicks – presents in Indian conditions may well be among the biggest Test cricket has thrown at batters through its history. New Zealand, though, have quality and experience running through their top five, and in Kane Williamson a world-class force whose record in India doesn’t reflect his immense skill against spin.
While it isn’t yet clear what shade of subcontinental this Green Park surface will be, it’ll be of a kind that New Zealand haven’t experienced for quite a while. As good as their fast bowlers are, their magnificent recent records have owed quite a bit to the green carpets that have been rolled out for them wherever they’ve gone. Their last nine Tests have all been played either at home or in England, and Kyle Jamieson, who has played all his eight Tests in this period, has a bowling average of – wait for it – 14.17.
How well he, Neil Wagner and Tim Southee – who has an outstanding record in Asia but hasn’t played in India since 2012 – adapt to Indian pitches might hold as much of a key to how many WTC points New Zealand take home from this tour as the performance of their spinners. On the latter front New Zealand might be better equipped than at any time since the days of Daniel Vettori, with Ajaz Patel having played significant roles in Test wins in Abu Dhabi (twice) and Colombo, and with Will Somerville having featured alongside him in two of those triumphs.

And while India will start as heavy favourites as they always do at home, their batting line-up won’t wear its usual impregnable look, with Rohit Sharma, KL Rahul, Virat Kohli and Rishabh Pant absent; with Cheteshwar Pujara and Ajinkya Rahane potentially rusty in addition to not having been in the best of form for close to two years; and with one or potentially two debutants set to feature.

In this line-up’s inexperience might lie New Zealand’s biggest opportunity.

The last time New Zealand made a full tour of India, Ajinkya Rahane scored a career-best 188 in the third Test and lifted his average to 51.37 after 29 matches. Now, after 78 Tests, that number has dropped below 40, and a number of young, hungry middle-order batters are breathing down his neck. Against that backdrop, and as the stand-in captain and experienced pillar in a largely inexperienced top six, this could be a very important Test in his career.
Ajaz Patel comes into this series with 13 wickets at 29.61 against Pakistan in the UAE, and nine wickets at 26.88 in Sri Lanka. Those are excellent numbers, but bowling in India, as even Shane Warne and Muthiah Muralidaran discovered, isn’t the same as it is in the rest of Asia. It’s the biggest test for a visiting spinner, but if he can bowl a lot of overs and bowl them with control, the rest of the New Zealand attack will have an axis to bowl around.

Rahane has confirmed Shreyas Iyer will make his debut on Thursday. He hasn’t ruled out playing another debutant in Suryakumar Yadav as well, though, with India not yet revealing if they will play five specialist batters – as they have done in most of their recent home Tests – or six. They may have a difficult decision to make on which seamer to leave out, with a third being unlikely at a venue not reputed to offer too much pace or carry.

The big question for New Zealand is the composition of their attack – two spinners or three, and if two, which two; and if only two seamers, which one to leave out. Will Young seems likely to take the opening slot vacated by Devon Conway’s injury, with Tom Blundell taking the keeping gloves in the first Test of the post-BJ Watling era.

Ashwin and Jadeja shared 16 wickets between them the last time India met New Zealand in a Test match in Kanpur. In his pre-match press conference, Rahane didn’t go into a whole lot of detail about what he expected from this Green Park pitch, but he made it clear that India, like every other team in the WTC, would look to “make the most of home advantage”. It would be no surprise, therefore, if both teams picked three spinners.

“When we play on spin-friendly wickets, it is a challenge even for Indian batsmen. But as batsmen once you are in you have to make it count. It is a challenge and we accept that. We are not bothered about our runs, but as a team we want to win each and every game.”
Ajinkya Rahane says India’s batters don’t mind it if their averages suffer in the team’s quest for Test wins

“I’ve got Wags (Neil Wagner) and Timmy (Tim Southee) here, so that’ll be good to bounce ideas of them, to get their expertise on how to bowl here. It’s certainly going to be a different challenge to what we get back home but really looking forward to it.”
Kyle Jamieson looks forward to the biggest challenge of his career so far