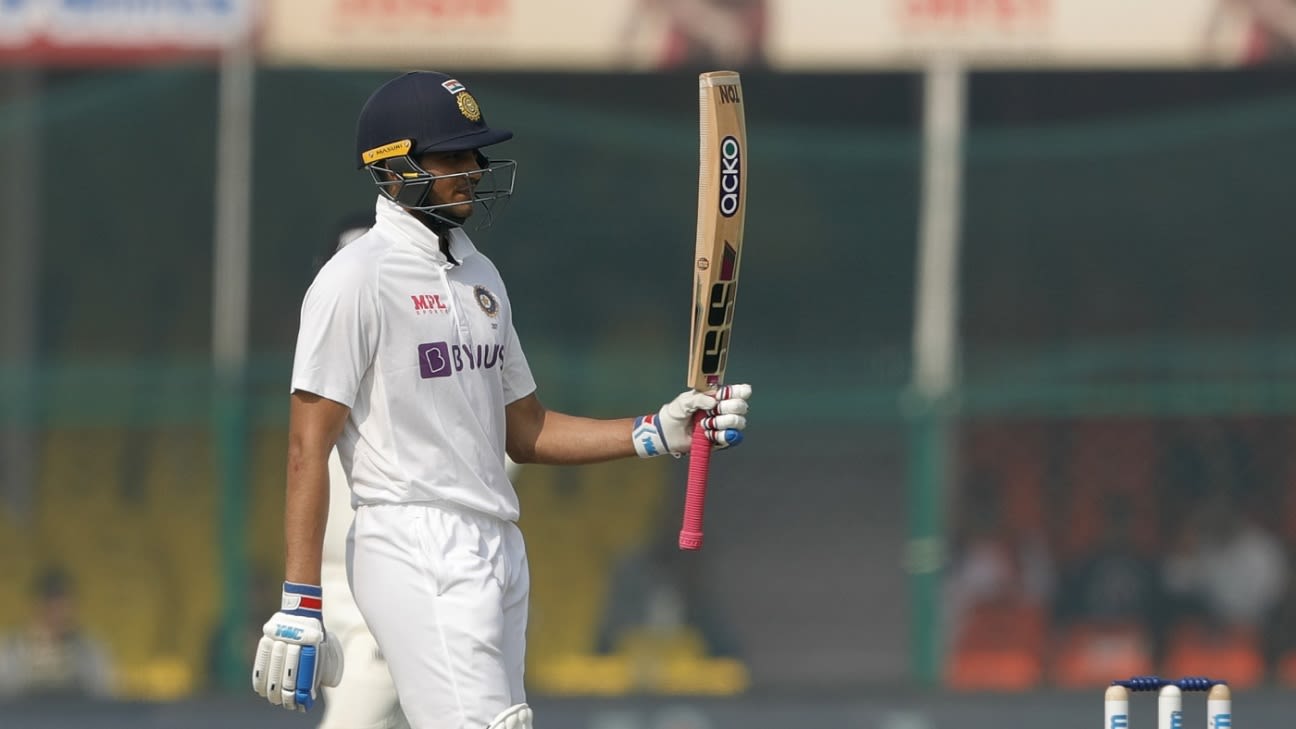 It’s perhaps a little early to be saying it, but Shubman Gill could already be playing an innings comparable to Rohit Sharma’s first-day hundred in Chennai earlier this year. By lunch on day one, this Kanpur pitch had already shown numerous warning signs of a sharp turn and inconsistent bounce, but Gill was batting serenely on 52 off 87 balls and had put on an unbroken 61 for the second wicket with Cheteshwar Pujara.
The key contest of the session was between Gill and Ajaz Patel, New Zealand’s lead spinner. Ajaz could have had Gill in his very first over had he reviewed – or even appealed more vociferously – a not-out decision to an lbw shout when the batter came down the track and played down the wrong line of a ball that drifted in and turned less than expected. New Zealand’s lack of enthusiasm perhaps stemmed from how far Gill had stepped out, and perhaps from thinking it was bat-pad when it was, in fact, pad-bat; ball-tracking suggested the ball would have gone on to hit middle stump.
Kyle Jamieson, bowling his very first spell in Asian conditions, struck in the very next over, nicking off Mayank Agarwal after troubling him incessantly with his outswing and away-seam in the corridor – the edge was the fifth false shot in 17 balls that Agarwal faced from Jamieson. It was vindication for New Zealand picking Jamieson over the experienced Neil Wagner.

India were 21 for 1 at that point. Had they been able to add Gill’s wicket to that score, New Zealand could have had India in serious trouble, given they were missing four first-choice members of their top six, and the way the pitch was behaving.

As it happened, Gill took control of proceedings, shrugging off the odd instance of the ball turning past his edge or keeping low, and picking up his runs in a manner that was both serene and opportunistic. He used his feet less often than Pujara at the other end, but when he did it was often with great success – he hit Ajaz for a towering six over long-on and a skimming drive over mid-off. More impressive still was his back-foot play; he stepped deep in his crease the moment the ball was marginally short, and from there played a couple of truly memorable shots: an old-fashioned late-cut past backward point, and a stunning straight-bat punch to the right of midwicket.

All this contributed to Gill taking 29 runs off the 28 balls he faced from Ajaz, and this happened despite the left-arm spinner bowling with a good degree of control through most of his spell.

All of New Zealand’s three spinners looked the part, in fact, with the gangly Will Somerville bowling quick offbreaks into the pitch and getting the odd ball to turn and jump, and with Rachin Ravindra – making his debut after being preferred ahead of fellow left-arm-spin-bowling allrounder Mitchell Santner – getting one ball to turn square, across the face of Gill’s bat, while conceding just two runs in two overs before lunch.