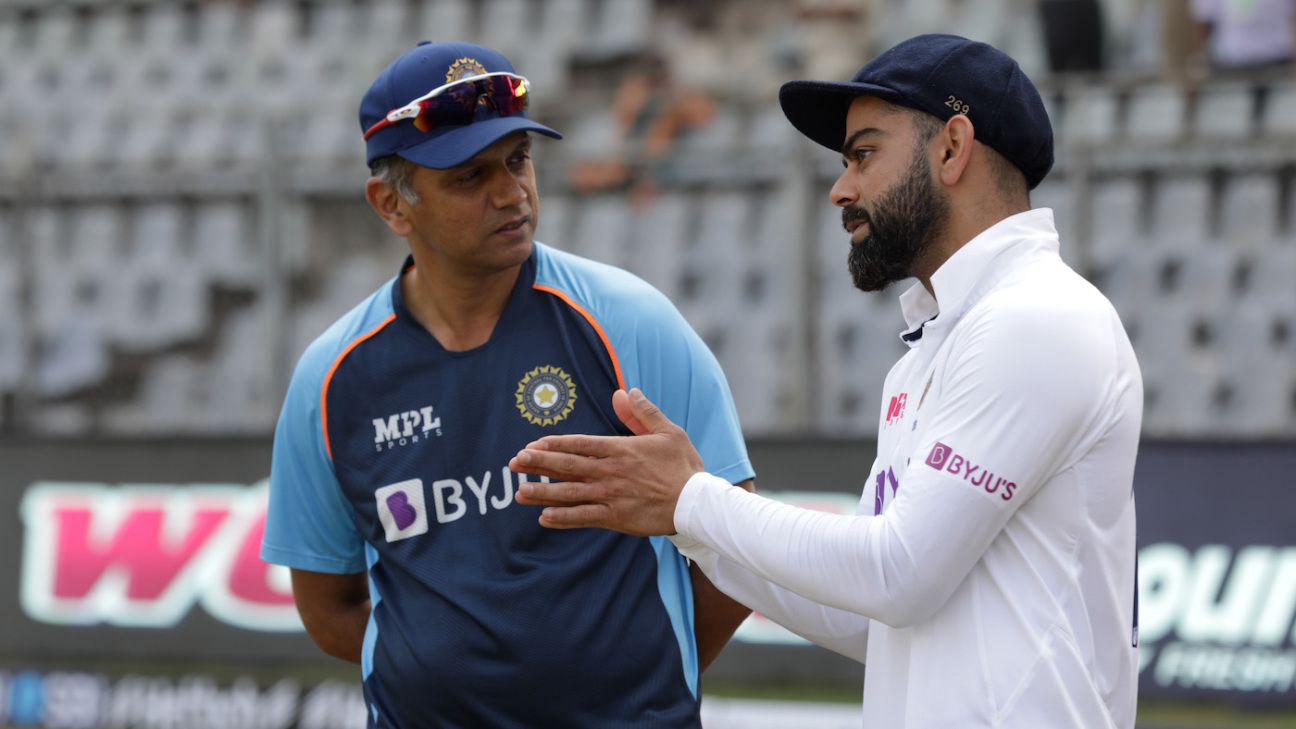 The subplot of who said what, or didn’t, to whom, in the lead-up to Virat Kohli‘s resignation as T20I captain and subsequent removal as ODI captain, has swirled incessantly around India’s ongoing tour of South Africa. All this could have been a distraction from Kohli’s immediate task as captain of India’s Test team in South Africa, but none of it, according to head coach Rahul Dravid, has affected his preparation or his leadership.

“I know there’s been a lot of noise on other issues a little bit, outside of the group, even leading into this Test match, but honestly, in terms of keeping the morale high, it’s not been very difficult because, to be honest, it’s been led by the skipper himself,” Dravid said in a press conference on the eve of the second Test in Johannesburg. “I think Virat has been absolutely phenomenal over the last sort of 20 days that we’ve been here – the way he’s trained, the way he’s practiced, the way he’s connected with the group.

“As a coach, sometimes, leading into the series, you know that there’s not really too much you can do once the game starts, or there’s not too much you can control in the results. But what you’re really looking to do as coaches or as support staff, we’re looking to prepare well and get the team into a really good space. And Virat has been phenomenal in that – the way he’s led the team, he’s been absolutely, truly a leader, and I couldn’t speak more highly about him and the way he’s committed to his own preparation, his own practice, and also just the way he’s connected with the group over the last two weeks.

Dravid went on to predict that Kohli was on the cusp of turning his batting form around as well. Kohli has averaged 26.08 over 14 Tests since the start of 2020, with no centuries, and his two innings in the first Test in Centurion stayed true to that theme: solid starts followed by a dismissal against the run of play, twice out to drives played away from the body.

“Even though he batted well and couldn’t convert those starts, I really feel there’s going to be a big run of really good scores coming in from someone like him,” Dravid said, “just observing him around the group, how relaxed he’s been, how calm he’s been, how he’s preparing, and how switched on he is.

“It’s not a question of being worried, but it’s a question about recognising that as a batsman, as a middle-order player, as someone who bats in that kind of position, it is sometimes tough to bat and it’s not easy to bat in these conditions”

“Might not happen in the next game – I would really hope it happens in the next game – but I do feel with someone like him, we’re going to see a really big run of scores once that clicks in place, because he’s really led the way, and I couldn’t speak more highly of him. I think he’s been a real credit to himself and to Indian cricket over these last two weeks in spite of all the noise that’s been there around him.”

When asked about Cheteshwar Pujara‘s recent form – he has averaged 26.21 since the start of 2020, with seven fifties and no hundreds – Dravid reiterated the view that batters could sometimes bat well in tough conditions without necessarily getting big scores.

“I think he’s doing the best he can, and I do recognise that at times, certainly he would like to have scored more runs. I think someone like him sets really high standards for himself,” Dravid said. “He’s achieved a lot of success in the ten years that he’s played [Test] cricket, so he knows the highs he’s had and the kind of success he’s had, and the kind of performances or the run of scores that he’s had in the past. So obviously he would like to replicate that and he would like to keep doing that over and over again, sometimes it doesn’t happen.

“It’s not a question of being worried, but it’s a question about recognising that as a batsman, as a middle-order player, as someone who bats in that kind of position, it is sometimes tough to bat and it’s not easy to bat in these conditions. But when you do get set it’s really nice when one of your top three or top four can convert that into a big score.

“We saw the value of that in [KL] Rahul‘s hundred [in the first Test]. If that happens, it really sets you up very well as a team, and it would be great if Pujara can do that, because we know that when he does that, a lot of times India do win those games or we put ourselves in really good positions.”