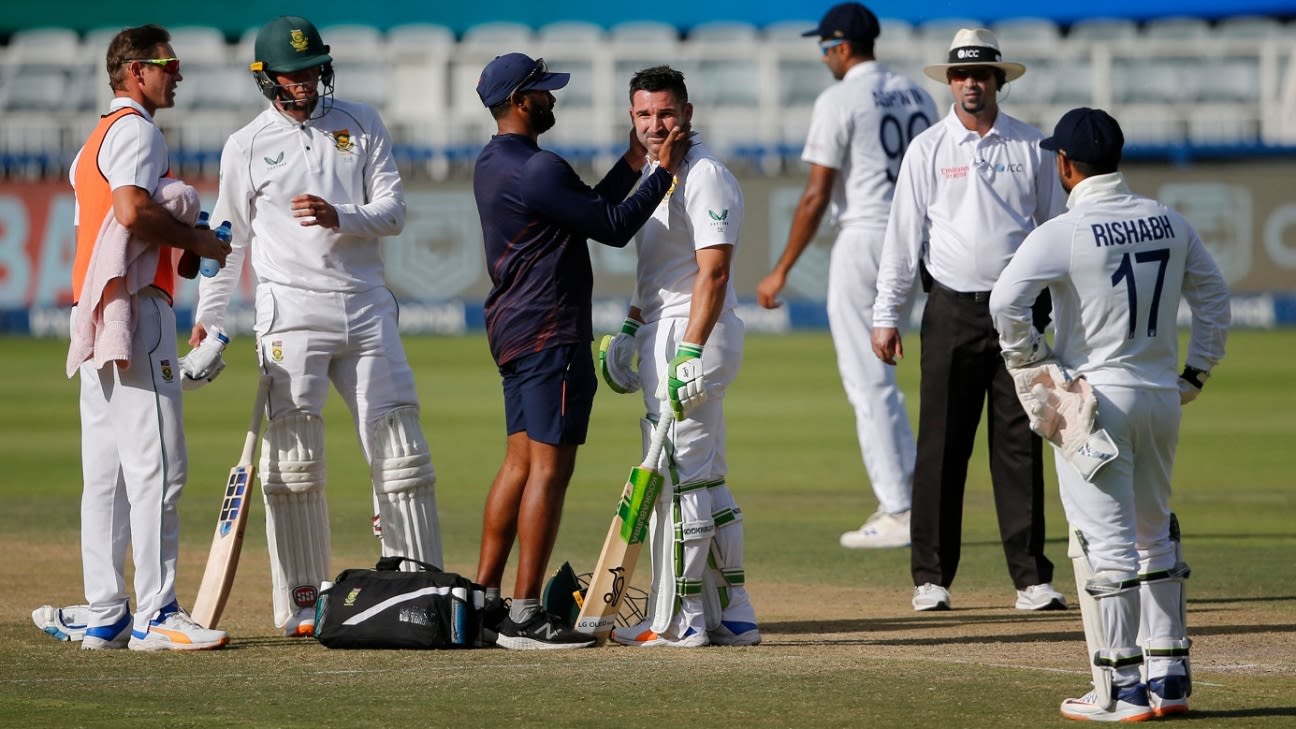 Captain goes to stumps unbeaten on 46, with hosts needing 122 more to keep the series alive

A sturdy display by South Africa’s top order put them in position to level the series against India, ending the fourth day’s play on 118 for 2, practically halfway through their chase of 240. Fortunes swung from one team to another during the course of a gripping day’s cricket, as India made 266 in their second innings – less than what looked possible when Cheteshwar Pujara and Ajinkya Rahane were putting together a century stand, but more than seemed probable when India slid to 184 for 6 and then 228 for 8.
South Africa lost Aiden Markram and Keegan Petersen in their chase, but each of the partnerships they have had so far have been substantial, especially in the context of the target. Markram and Dean Elgar took a leaf out of the Pujara-Rahane book and began aggressively, putting on 47 in ten overs. Elgar and Petersen then added 46, while the unbroken Elgar-Rassie van der Dussen stand has yielded 25 runs in 12.4 overs so far.

Elgar played his usual bloody-minded innings, wearing blows on the body, shrugging off edges and balls whistling past, and always finding a way to survive. Apart from the opening burst where Jasprit Bumrah and Mohammed Shami had a rare period of not landing the ball exactly where they wished, India’s bowlers kept asking questions of the batters; but until stumps, South Africa’s top order weathered them.

While the hosts ended the day with the advantage, the morning had brought forth a deluge of runs via Pujara and Rahane. Both men had come into the game with increasing scrutiny about their spots in the XI, and ended up making fifties. They were proactive and on the lookout for runs. Pujara showed his intent early by whacking an on drive to the long-on boundary off Lungi Ngidi in the day’s second over – this, after he had already glanced a four at the start of it. It was the sort of ball which Pujara might ordinarily have just pushed to cover. Three overs later, Rahane rose with the ball as Jansen banged it in short outside off, and cut it beautifully over point for six.

Just when South Africa were looking flat, Kagiso Rabada found ferocious rhythm after the first drinks break. He hit the hard length outside off that has made balls rear up on this pitch, and moved it away just enough to catch Rahane’s outside edge with the batter unable to prevent his hands following the ball. In his next over, Rabada got one to dart back into Pujara at pace, and trapped him lbw.

Rabada then gave Rishabh Pant a working over in just two balls, beating him outside off first up and then firing a missile that rose up to throat and had the batter in a complete tangle as he fended with his gloves and saw the ball land short of the slips. Next ball, Pant danced down the track and tried to whack Rabada over cover, but only got an edge through to the keeper. With Rabada in the seventh over of his spell and his bowling clearly a cut above the rest, Pant’s shot selection might not have been the best.

India had gone into lunch at 188 for 6, but after that Shardul Thakur came out swinging – and also connecting. There was one top-edged six, but five superbly timed fours as Thakur pushed India’s lead into the 200 territory. After he was caught on the boundary off Marco Jansen, Hanuma Vihari farmed the strike and went for his shots. Even so, he wasn’t always successful in shielding the bowlers, and Bumrah faced down a short-ball barrage from Jansen, in the middle of which there were words exchanged and a mid-pitch confrontation where players had to separate the two men, who were team-mates at Mumbai Indians just three months back.

India’s target seemed like a safe one given the nature of the surface, where some balls were spitting up off a length. But a confident Markram put his failures of this series behind him to play an attacking role in the opening stand.

Thakur continued to have a fantastic Test when he trapped Markram lbw in an over that had two close calls already. R Ashwin then provided an important breakthrough, getting Peterson lbw. He had van der Dussen in some trouble too, and while KL Rahul rotated his bowlers around – the injured Mohammed Siraj bowled the least – and all of them kept things tight, Elgar and van der Dussen survived till stumps.